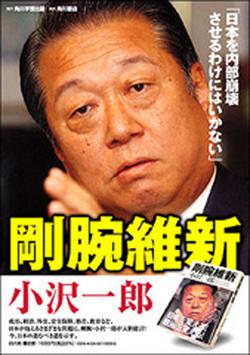 Strong Arm Restoration (Gowan Ishin) is a collection of newspaper columns written by Ichiro Ozawa that first appeared in the Evening Fuji [夕刊フジ] newspaper between 2003 and 2006. His weekly column touches on politics, the economy, foreign policy, education, and crime. As for the book’s title, “Strong Arm” [剛腕] is an expression with which Ozawa is closely associated as it reflects his sometimes arm-twisting political manoeuvres. He admits he has to try harder to be more consensus oriented if he is to head a party that covers a spectrum of political philosophy and ideology and one day lead the nation. The “Restoration” [維新] part of the title refers to the “Meiji Restoration,” a theme Ozawa often uses to liken himself to the Meiji leaders who transformed the nation from the feudalistic Shogunate’s rule to a modern nation.

A constant theme in his writings is Ozawa’s distrust of Junichiro Koizumi, who was prime minister from 2001 to 2006, overlapping the period in which the columns were written. Ozawa attacks the political direction pushed by the Koizumi administration, sometimes bordering on personal attacks. His criticism of specific issues such as taxes, pensions, and privatization may be valid but he rarely proposes his own ideas beyond moral indignation.

This book makes the reader wonder if Ozawa can step outside of his obsession with contrasting himself against those who are in power either in his own party or the opposition Liberal Democratic Party. He advocates high ethical and moral standards for politicians, but he himself is mired in dubious real estate dealings that are reported in the press and resulted in his current indictment.