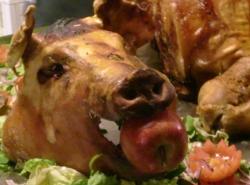 In Japan there is a curious word play regarding the 29th day of the month in Japanese, put into just its number components it creates the word ni-kyuu [二九] which is the same as niku [肉] which means meat. So, quite often many people can be found eating meat on this day in Japan. Delving into the mystery of ‘niku’ day turns up a number of interesting facts about Japanese culture, and of course meat. For example, the 9th of February is also a day of meat [肉の日] due to it being the second month and the ninth day, ni-kyuu [二九], and the 29th of April is a day for eating lamb and mutton [羊肉の日]. More importantly, the 29th of February only occurs every four years so it is known as uruo niku no hi [閏肉の日], a leap day of meat and therefore a special day. This month marks such a special day.

In recent decades the Japanese population in the UK has been steadily increasing, and accordingly Japanese culture has begun to leave its mark. Today it is possible to watch Japanese movies, attend Japanese festivals, art exhibitions, eat Japanese food, and now the idea of eating meat on the 29th has started to gather adherents. Shingo Watanabe is 27, he graduated from Imperial College Business School in MSc Management in 2009 and is currently working in an accountancy firm as a trainee. He describes himself as a backpacker, basketball player, a book reader of all genres, and of course loves to sing at karaoke. He moved to the UK with the ultimate career objective of being a fundraiser consultant in the NPO/NGO sector, and since moving here he has enjoyed having a meat day every 29th of the month. In January 2011 Shingo, along with a friend, began the London Meat Festival group.

Shingo explained to me that the idea began simply because he was in London and enjoyed doing it, and after a discussion with a friend of his, they decided to launch a Facebook page and advertise it also on Mixb (a Japanese classifieds website). Anyone can join, as long as they want to eat meat, and I have found from experience also to drink lots of wine, and although the membership is mainly Japanese, any nationality is welcome. The first London Meat Festival was held on the 29th of January 2011 at Le Relais de Venise, and since then it has gone from strength to strength, gaining a large following and allowing meat eaters to meet other fellow meat lovers. When I asked Shingo about the kinds of meats they have eaten the list was impressive; traditional steak, Sunday Roast, a whole pig, a whole lamb, gibier (French for grouse, rabbit and pigeon), beef and Korean BBQ.

When deciding their next destination for a meat festival Shingo and others research restaurants from magazines, and they also listen to member’s ideas too. There are no set criteria for the restaurants they have chosen; it has included Japanese, Argentinian, Brazilian, etc, restaurants, as well as a German Beer House. So far he tells me, his favourite experience was eating at the Bavarian Beer House as they were able to eat a whole pig, and looking at the photos I can see why. Personally I attended when the festival was held at the Japanese So Restaurant in Soho. I have always known that this restaurant is great for sushi, but they came up with a fantastic meat menu consisting of gibier, and great red wine. By chatting to others next to me it quickly became very clear that people from all walks of life had been attracted to this group and that some great friendships were being started up. The organisers and regular participants are very welcoming to newcomers and the mixture of delicious food and great conversation creates a wonderful atmosphere.

As this month is a special date for eating meat (uruo niku no hi [閏肉の日]), Shingo elaborated that they want to mark this occasion so they are going to the Hawksmoor restaurant which they have heard has the best steak in the UK. Currently they have a Facebook page which can be found at http://www.facebook.com/LondonMeatFestival, and they still advertise monthly on Mixb. Shingo hopes his London Meat Festival will gradually evolve into a proper organisation, but in the meantime anyone wishing to join can also email them at londoner.sw@gmail.com. 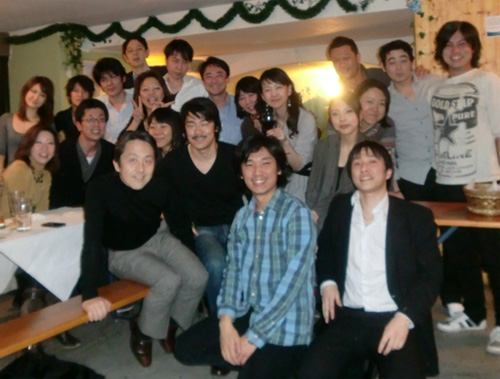