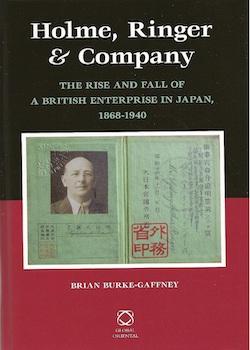 Ask anyone interested in relations between Britain and Japan what British merchant was most closely associated with Nagasaki the reply is likely to be that of Thomas B. Glover, described by his biographer as a Scottish samurai. But Glover & Co went bankrupt in 1870 and Glover moved to Tokyo, only returning to Nagasaki following the outbreak of the Sino-Japanese war.  The dominant British firm in Nagasaki in the Meiji period was Holme, Ringer & Company which was controlled by Frederick Ringer (1838-1907).   The firm remained in the hands of the Ringer family including sons-in-law until they were forced to leave or were arrested on the outbreak of the Pacific War in December 1941.  Burke-Gaffney in this book tells the story of the Ringer family and their business interests in Nagasaki and Shimonoseki.

Frederick Ringer was born in Norwich where he died and was buried. He had firm views and imposed his own rules on the company. He insisted that “all Japanese employees maintain their integrity by wearing only Japanese clothing and footwear and, similarly that foreigners refrain from unsightly forays into Japanese culture and society.”  He frowned on interracial marriage.  One partner working with the Ringer subsidiary in Shimonoseki, Neil B. Reid, had to hide his liaison with a geisha and only had limited contacts with his natural son. The latter took the name Fujiwara Yoshie and went on to found the Fujiwara opera company.

The Ringer family residence known as ‘Niban’ [Number two] at Minamiyamate in Nagasaki is preserved in Nagasaki’s Glover Garden and has been designated an “Important Cultural Asset.”

Frederick Ringer had a particular attachment to the Nagasaki Hotel whose company he founded and which opened its doors in September 1898 only a few months after the opening of the Royal Hotel in Norwich to which Frederick Ringer returned before he died.  The Nagasaki Hotel was designed by the British architect Josiah Conder who has been described as the father of Japanese architecture. It had fifty-six rooms “furnished with large brass beds and teak furniture…[and] private telephones” but it charged four yen a night “or the average cost of a month’s room in a Japanese inn.” It opened at a time when the port of Nagasaki was still booming, but Nagasaki’s importance soon declined sharply and the Nagasaki hotel became an ever increasing drain on Ringer’s resources. Eventually in February 1908 the hotel and its contents including a stock of fine wines were sold. They had a problem when it came to disposing of the expensive tableware which was marked NH. Fortunately the Nara Hotel which opened in the same year came forward as a buyer.

Burke Gaffney relates how Holme, Ringer & Company came to open a branch in Shimonoseki. This arose from the company’s interests in shipping and fishing including whaling. The company’s subsidiary “Woriu Shokwai”  came to represent British interests in the straits between Shimonoseki and Moji in Kyushu.

Burke-Gaffney has some amusing stories about the jealousies between consuls and merchants who for their part were only too glad to become honorary consuls for countries such as Belgium and Denmark which could not afford to appoint career consuls.¹ As Belgian consul in 1895 Frederick Ringer found himself involved as judge in a murder case.²  Fortunately for Ringer there was evidence that the woman who was alleged to have been murdered had in fact committed suicide.

Frederick Ringer envisaged that his family would continue and develop his business in much the same way as other family businesses in Japan went on from generation to generation. But Nagasaki’s importance in shipping and trade declined. It became instead one of Japan’s main ship-building centres and Shimonoseki could not be a substitute for the firm. Moreover the environment for foreign firms deteriorated rapidly in the 1930s as the military came to dominate Japanese life.

In 1940 the Ringers were accused on the flimsiest of grounds of spying and members of the Ringer family were arrested. Vanya Ringer was tried, fined and given a suspended prison sentence.³   The firm was forced to close.

Vanya Ringer was killed in action during the war. Michael Ringer was captured in Sumatra and suffered as a Japanese prisoner of war. After the war was over and he had become a British Indian Army Major he was summoned to give evidence at the International Military Tribunal for the Far East (IMTFE) in December 1946 about Japanese treatment of prisoners of war.

Surviving members of the Ringer family were regular visitors to Japan after the war. They had to make numerous representations to gain compensation for their properties in Japan which had been confiscated and vandalized. Holme, Ringer & Company continued to maintain a small office in Shimonoseki/Moji for many years after the war. The last manager and British consular agent was Perry. S. Mihara.

This book supplements the picture of life for expatriates in Nagasaki given in Burke Gaffney’s Nagasaki: The British Experience, 1854-1945, Global Oriental, 2009 [see the review in JSR issue 23].  For anyone with an interest in the history of the British community in Japan in the Meiji period this book makes fascinating reading.

¹ Britain maintained a consulate at Nagasaki until the outbreak of war and a post in Shimonoseki for some twenty years at the beginning of the twentieth century.

³ I included brief references to these incidents in volume VIII of Britain and Japan: Biographical Portraits just published. See chapter 39 on ‘The Death of James Melville Cox…and Arrests of British Citizens in Japan in 1940 and 1941’. Burke Gaffney gives a fuller account.