An Interview with Taro Hakase about his new album JAPONISM 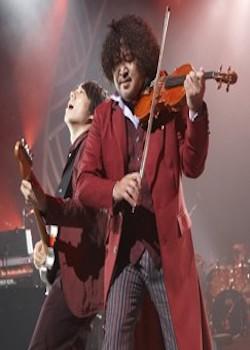 The violinist and composer Taro Hakase was born in 1968 in Suita City, Osaka, and he has been releasing albums and performing at concerts for over twenty years. For the last few years he has called London home, regularly performing at Cadogan Hall in Chelsea. After the 2011 Tohoku Earthquake he held seven concerts in five days across London to raise funds for the people affected by the disastrous earthquake and tsunami that hit Northwest Japan. This year he released his latest album, JAPONISM, and to launch it he completed an amazing live broadcast of a climb up Mt. Fuji followed by a performance on the summit. He took time out from his busy world tour to talk with Mike Sullivan.

Please tell us about your world tour: JAPONISM.

What does JAPONISM mean to you?

The word JAPONISM represents an art movement that took place in the centre of Paris at the end of the 19th century. In world fairs and international exhibitions European artists could touch the culture of  Japan for the first time; in particular the art of Ukiyoe and Edo was incorporated into the European consciousness.

Artists like Monet, Van Gogh, Degas, Lautrec, were all influenced by Japanese paintings and a new era of global arts practice began. This album marks the first time that the music and culture of my country has been the central theme of my own work. At forty-five I have come to realise how beautiful my homeland really is. This is my JAPONISM, to show this feeling to the world through music, the aesthetic sense which flows through every Japanese. It is my way of restoring a pride and confidence in Japan as a nation and a call to everyone that I want to make music with all of my heart.

What kind of JAPONISM feeling did you put into the music?

In the album JAPONISM there is some hana (flower) music.  I really engage with the Japanese sense of beauty; such as the moment the cherry blossom blooms in spring. To us beautiful flowers are symbolic of our country.

On the release date of the album JAPONISM you sent out a live music broadcast from Mt. Fuji, what inspired you to do such an event?

For the album release date I wanted to do something active and, during the summer we were discussing it, Mt. Fuji was registered as a World Heritage Site. Just as the album is titled JAPONISM, The Tokyo radio station J-WAVE helped us to plan the ascent; a symbolic mountain to fit with a symbolic album.

How did you feel afterwards?

It took nine hours to climb to the summit and it was extremely cold at the top, with a temperature of just two degrees.  I felt that it was only through sheer will power that I managed to complete the live performance. It was very difficult but this ultimately led to a greater sense of accomplishment shared with the whole team.

How does it feel to hold the record for most concerts held in Japan?

The number of people I have performed for reached 200,000 a year ago. However, this number only includes audience members since 2000; it doesn’t include the people I have performed for since 1990 when I had my debut with Chrysler & Company or as a solo artist. In recent years I have done performances with a classical theme in the spring, from my own albums in the autumn, live outdoor performances known as ‘Passionate Continent’ [jounetsu tairiku -情熱大陸] in the summer and, since 2008, I have managed to stage around 100 performances altogether in London.

What did you think when you heard that Japan had been chosen for the 2020 Olympics?

As a Japanese national I was very proud and felt very happy.

It was very inspirational when you completed seven concerts in five days across London after the 2011 Tohoku  Earthquake, it really felt like you represented Japanese spirit at that time. However, it must have been very hard?

As a Japanese musician living in London, I had to do what I could to help my homeland to the furthest extent possible.

When you reflect back on your amazing career, which moments stick out for you?

Everything that I have done has been a precious experience, but the three years I toured the world with Celine Dion was a treasurable experience that left me with a lasting impression.

Please tell us about the origin of your trademark hair.

At the time of my debut, Sauvage [hairstyles] had become very popular amongst young women. Since then the curly hair of a violinist has become my own personal thing, and now as part of my work I continue to perm it.

What are you looking forward to most when you are in London for your concert at the O2 Shepherds Bush Empire on Monday 25 November?

I am looking forward to being able to communicate the cool side of Japanese culture to the people of London.

This time, you will tour five countries outside of Japan, but are there any differences between a British audience and those other audiences?

British audiences are very warm. In the world, their applause and cheers are the loudest, and so I look forward to this every time I am on a London stage.

Since I moved to London in 2007, I have done many classical concerts around the UK, but this time I want to show everyone in London my popular music style from Japan. On 25 November I would like as many people as possible to experience this side of my music at the O2 Shepherds Bush Empire.

I want to celebrate with everyone my first world tour London concert! Get ready to enjoy it!!

Finally, what is your favourite thing about having concerts in the UK?

It has been 7 years since I started to live in London and I would be very happy if I could perform a classical concert every year in this city that I love. That I have continued to do this is really thanks to the audience members who have always encouraged me with their constant support. For me, London is my second home.

Tickets to Taro Hakase’s upcoming concert can be bought at www.livenation.co.uk