My Father in his Suitcase, In search of E.J.H.Corner the Relentless Botanist 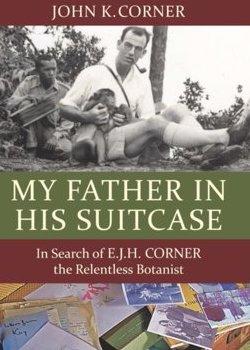 Professor Corner was ‘one of the most colourful and productive biologists and mycologists of the 20th century.’ In 1929 he became assistant director of the botanical gardens in Singapore where he produced  Wayside Trees of Malaya, regarded as a classic field guide. After the war and employment on a conservation project for UNESCO in the Amazon he returned to Cambridge University where he was appointed Professor of Tropical Botany in 1965 and was elected a Fellow of the Royal Society.

The late Dr Carmen Blacker wrote a biographical portrait of Professor Corner for volume V of Britain and Japan: Biographical Portraits, which I edited and which was published in 2005. This concentrated on Professor Corner’s activities in Japan during the Japanese occupation from 1942-45 and on his relationships with Japanese scientists. In 1981 Professor Corner had written a book entitled The Marquis, which took as its main theme his experiences in Singapore and the friendship, which developed between him and Yoshichika Tokugawa [徳川 義親]. I reviewed this book in 1982 and commented that ‘In essence it [The Marquis] demonstrates that science, real education and moral spirit know no frontiers.’ I also commented that the book was ‘a tribute to a small number of outstanding Japanese scientists who by their efforts and devotion helped to preserve the records and achievements botanical, zoological and historical of Raffles Museum and botanical gardens in Singapore.’

John Corner became estranged from his father at the age of 19 and they never met again before his father died despite many attempts at reconciliation, but his father left for his son a suitcase of papers about his life. This spurred John Corner despite his feelings of resentment against his father and the break-up of his family to try to find out as much as possible about his father’s life and achievements. The result is an interesting story.  John Corner writes of his father in the Prologue: ‘He was a difficult man with a temper to whom I never felt close.’ Professor Corner, who quarreled with some of his colleagues, was clearly not an easy character.

The main interest for members of the Japan Society lies in what the book has to say about the Japanese in Singapore. It covers much of the story as set out by his father in The Marquis, but throws some interesting new light on the life in Singapore during the Japanese occupation.

Professor Corner and two other British civilian employees of the colonial administration were not interned with other officials and were employed on specialist duties, but they were subject to close and sometimes humiliating supervision. In some of their activities their lives were often in danger. The fact that they were not interned with the other civilians and did not have to suffer all the privations of their colleagues caused much controversy in the immediate aftermath of the war. Although officially exonerated from accusations of collaboration with the enemy, they were vilified by some of those who had been interned and had suffered much privation. John Corner makes a convincing case that his father had behaved honourably and that his actions had been done in the interests of science and not to avoid incarceration. Whenever there was a possibility of providing help to the internees he did what little he could.  No one today can make an informed and objective judgement not least because we cannot know all the circumstances.  We must also ask if we were in Professor Corner’s position in 1942 what would we have done? It is some 70 years since the Japanese occupation of Singapore and this issue should now be laid to rest.

John Corner’s research in Japan and elsewhere about the Japanese scientists who worked in Singapore and who befriended and protected his father against the military, show that they were humane and devoted to science. The book reminds us, however, of the more unpleasant aspects of Japanese activities in Singapore especially of the kempeitai [憲兵隊 – Military Police Corps, which was an arm of the Imperial Japanese Army]. It has to be remembered that there were Japanese plans directed by Field Marshal Terauchi, C-in-C of the Japanese forces in South East Asia, that prisoners were to be killed if Japan were defeated. Fortunately the war came to a speedy end after the atomic bomb attacks on Hiroshima and Nagasaki and the plans were not implemented.