Out of Silence: A Pianist’s Yearbook 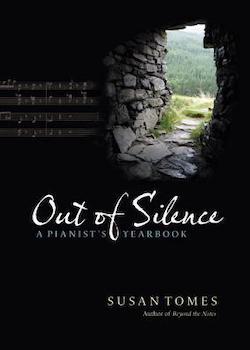 Out of Silence traces a year in the life of a classical pianist in the form of a blog. Each entry develops a theme that has inspired her interpretation of a score or her performance of a piece of music. The essays are short, thought provoking, informative, and interesting.

Although my own instrument is different, as a musician and performer I felt such a strong identification with this book that as I read on from page to page, I found myself “nodding vigorously,” as the translator says in her afterword. The essays in it describe frankly, unpretentiously and straightforwardly the thoughts and feelings of a globe-trotting performer in response to her daily life and experiences, and are short enough for even busy modern people to read.

In reality, performers are constantly plagued by worry and unease. But we hide all that when we’re on stage, and radiate confidence, or at least we try to. Performers are human too, so we naturally have our ups and downs. This book is honest about everything, including that worry and unease. Tomes simply says “this is how I am,” and writes exactly what she feels; you end up admiring her as a performer, or rather as a person.

As an abstract art form, music is often very difficult to write about in words, but Tomes’s writing weaves a spell. I also take my hat off to the translation by Noriko Ogawa, a pianist on the same global concert circuit – it’s immediately obvious that she’s not just translating the material literally.

To translate this book required the ability to see deeply and accurately into the linguistic and cultural differences and nuances not only between Japan and the UK, but also between their respective musical worlds. I think only Ogawa, with her deep knowledge of both cultures, could have managed it.

I read the book from a variety of perspectives – as a performer, as a Londoner, as a Japanese person, as an audience member, as a music-lover… Ogawa has rephrased the sometimes distinctively British idioms, phraseology and metaphors of the original text so that they are easily understandable in Japanese, and don’t interrupt the flow of the text.

Out of Silence: A Pianist’s Yearbook is shot through with Tomes’s humanity. I identified with her as a fellow-performer, but she also made me think. She made me see things from a new perspective, opening my eyes to some things I hadn’t noticed, and making me rethink others I thought I already knew about.

A further aspect of the book that anyone can enjoy is the exclusive peek it gives you at what life is like behind stage for a world-famous pianist. It made me want to attend Tomes, members of the trio, and Ogawa’s concerts.

In the afterword, Ogawa writes that ‘she couldn’t stop thinking ‘Thank you, Susan!’ – After reading the Japanese translation of the book, I feel it is my turn to say ‘Thank you, Noriko!’

Susan Tomes is a pianist and writer. Renowned as a soloist and as a chamber musician, she’s the author of three books about performing music: Beyond the Notes (2004), A Musician’s Alphabet (2006) and Out of Silence: A Pianist’s Yearbook (2010), which has recently been translated into Japanese by concert pianist Noriko Ogawa.

The Japanese review was written by Lisa Ueda [植田リサ], who is a violinist.