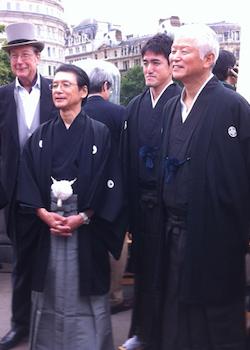 The 2013 Japan Matsuri was held on Saturday 5th October in Trafalgar Square, its second year at the world famous venue.  The dynamic annual event brings the Japanese community and Londoners together to enjoy an amazing day of Japanese culture, creating a genuine Matsuri festival-like feeling. As in previous years the public were treated to fantastic food, live performances, martial arts, dance, arts, crafts, family activities and much more. Huge crowds thronged Trafalgar Square, literally filling it with people from noon until the Matsuri ended at 9pm. The amazing spectacle is probably the largest annual gathering of Japanese people in the UK.

This year’s colourful opening ceremony highlighted two important anniversaries, the 400th anniversary of the first official contacts between Japan and Britain, known as Japan400, and the 150th anniversary since the first Japanese university students came to London, known as the Choshu Five. These trailblazers from the Choshu  domain, which is today called Yamaguchi Prefecture,  returned to Japan and all made a substantial contribution to the creation of modern Japan. One of their number, Hirobumi Ito,  became Japan’s first Prime Minister and is often referred to as the ‘father of the Japanese constitution.’ To celebrate this milestone, the current Japanese Ambassador to the UK, Mr Keiichi Hayashi, along with four fellow colleagues from Yamaguchi Prefecture dressed up as the intrepid five for the opening ceremony. The quintet were also accompanied on stage by their top hat wearing professor, Alexander Williamson (Martin Barrow) and key costumed figures from the Japan400 narrative including Captain John Saris, William Adams and Lord Tokugawa. Deputy Mayor of London Victoria Borwick also joined this dazzling gathering of historical figures who kicked off the day by cracking open a sake barrel. After the ceremony, all the historic characters descended into the crowd and paraded around the Square.

From its opening at 11am, the large performance stage conjured up a continuous feast of absolutely brilliant entertainment ranging from traditional Japanese music to electrifying modern performers. During the day, family-oriented acts dominated the stage and entertained the large numbers of children in the audience, making it a great family day out. In the afternoon the ‘Nodojiman: The J Factor’ Japanese song competition was as popular as ever with some top class performances by contestants battling to win the first prize London-Tokyo return plane ticket. The event’s ever cheerful presenters, the energetic Simon Wright and the multi-talented Naomi Suzuki,  also deserve a mention. They skilfully navigated the audience through the various acts and entertained the crowds in the spaces between. Naomi also sang and danced on stage in the late afternoon.

As the evening crept over the Square, the tone of the Matsuri performances changed, generating an exhilarating matsuri-type feeling. The final few acts created a brilliant finale sensation for the enthusiastic audience. The lively crowds were treated to the mesmerizing  moves of Siro-A, the amazing electric guitar of Hotei and the wonderful sound of Joji Hirota London Taiko Drummers.

Delicious food and drink could be purchased throughout the day which really enhanced the festive feeling. There were also many fascinating arts and crafts stalls as well as a host of free family activities ranging from origami to traditional Matsuri games as well as amazing opportunities to try on exquisite traditional Japanese armour and colourful yukatas. The Martial Arts stage was also a strong crowd-puller as was the enormous Manga Wall, where members of the public could draw their own comic creations.

This year’s Matsuri was a superb festival and brilliant fun. 2013 marked its fifth year and its first since it changed its status from a company to a charity. Japan Matsuri is organized by dedicated volunteers from the Japan Association in the UK, the Japan Chamber of Commerce and Industry in the UK, the Japan Society and the Nippon Club as well as strong support from the Embassy of Japan and the logistical management of the commercial company Éclat. These organizations and their army of energetic volunteers all deserve our thanks for arranging such a fantastic day.