Haruka Abe – Interview with an Actress 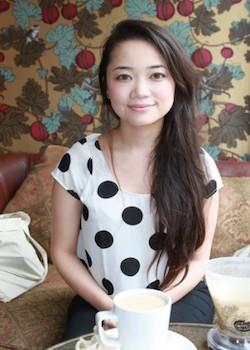 Haruka Abe is originally from Tokyo, after attending high school in Tokyo she was about to enter Aoyama University when she made the decision to move to London and attend a drama school. She graduated with a 1st class Bachelor of Arts degree and in a relatively short number of years she has starred in award winning short films, had recurring roles in a number of TV programmes and will soon be on the big screen in 47 Ronin, which also stars Keanu Reeves, Koh Shibasaki, Hiroyuki Sanada and Tadanobu Asano. In 2014 she will appear in an ITV comedy drama called Edge of Heaven alongside a number of other independent feature movies. We were very lucky to have the chance to meet her and ask her a few questions about her background and work.

Please tell us about your upcoming role in the movie 47 Ronin, and how it felt to be part of a big production featuring so many Japanese actors/actresses as well as Keanu Reeves

My character is a handmaiden who serves the princess of Ako, a fictional character played by Koh Shibasaki. It’s a small role but I got to film in Budapest and in London which was fantastic. It was the most amazing experience to work with some of the finest actors in Japan. I got to work closely with Koh-san who is one of the most incredible people I’ve ever met, and working with Sanada-san was truly inspiring. He cares so much about his art and about Japanese culture. It was an honour to work with such a talented team.

Could you tell us about your background? For example, when did you first know you wanted to become an actress?

I was born in Tokyo, moved between New York, London and Tokyo as a child with my family, and moved back to London on my own to go to a drama school. I always wanted to become an actor or a painter (or a mermaid), but the moment I knew for sure was when I played Bilbo Baggins in my school production of The Hobbit when I was nine.

What is the scariest part of an audition?

I always think that being an actor is like constantly falling in love. Nine out of ten times, you fall in love with the character, you pour your heart out in the audition, only to be told they don’t want you, and it breaks your heart. But on the rare occasion when they turn around and say, ‘I pick you’, you get to have the time of your life. I guess the scariest part of an audition is the fact that no matter how much you love your character you may not be able to play him or her. But what’s the fun of being in love without a little challenge, right?

What was the first TV or film that you ever did?

I think it was a BBC3 sitcom called IDEAL. I played Miko, a giggly Japanese girl who is a guitarist in a hard-core rock band. I had to air-guitar and go crazy in the audition. It was just for one episode initially but it turned into a semi-regular role appearing in all 5 series. The cast and crew were all fantastic to work with and it was the best ‘first job’ I could have hoped for.

Do you prefer acting for film or TV?

I love both! TV is very fast paced and you really need to be on top of everything. You could be juggling many episodes at a time and really need to know where your character is – at which point in which script. With films you generally get more time to get to know your script, and rehearse etc. For me it’s all down to the script and the character I get to play, whether it’s TV or film.  I love getting to know the cast and crew, so the more time on set the better!

What is the most embarrassing or unexpected thing that has happened to you when filming a scene?

A pigeon flew into the back of my head once. I did not see that one coming!
It’s not filming, but when I was performing the aforementioned school play, The Hobbit, I forgot to get back on stage after the break between the first and the second act, and my poor class-mates were on stage going, ‘Where’s Bilbo? Where’s Bilbo?’ for a good five minutes. In my defence, the teacher didn’t say my name when she was calling out for the cast members who were meant to be in the beginning of the second act. ‘You’re Bilbo! You’re in EVERY scene!’ said the teacher upon finding me munching on biscuits and watching TV in the classroom.

It seems like you enjoy taking on challenging roles, for the short movies Precision and Pulling Away everything had to be completed within 40 and 100 hours respectively, how difficult was that?

I do enjoy a good challenge! We also wrote, shot and edited Choose within 48 hours (well, the team did). I love just jumping into the scene and being in the ‘moment’. With guerrilla style shoots you don’t have the luxury of being in a controlled environment and doing take after take, and you have to really focus, be creative and get the shots in the can, which is challenging but fun. Long hours doesn’t bother me at all, time flies when you’re having fun.

Pulling Away addressed the subject of Japanese people who refuse to leave their bedroom or house, which for many people it is hard to understand. How hard, or easy, was it to identify with this kind of character?

I’m quite a shy person so I can easily go on for days without speaking to anybody and I have been in that place where you are so heartbroken that you feel like not caring anymore. So yes, I could identify with that state of mind. I think it’s quite easy to slip into that state of lethargy or vulnerability if you allow yourself to.

Stanley Pickle was an incredible stop motion movie, how difficult was it to be filmed in this way?

Filming Stanley Pickle was challenging as pixilation is a very physically demanding process. It was all shot on a stills camera, and we had to move one inch at a time, sometimes holding a very difficult position for quite a while. I used to dance and I also trained in physical theatre which helped. Also, when the character goes through a range of emotions, you have to break it down accordingly, so that it flows naturally when everything is put together. It was quite a hypnotic experience as the world around you goes by at normal speed while your world moves in slow motion.

Have you acted in anything in Japan? What do you think are the differences between being an actress in Japan and in the UK?

I used to train in Gekidan Himawari, a children’s drama school in Tokyo. So I have been in a few NHK dramas playing small parts when I was little. I think there is a big difference between being an actress in Japan and in the UK, but I can go on and on about it and it might not be that interesting! The industries seem completely different, from training to audition process to working hours.

What do you think is the biggest challenge to being a Japanese actress in the UK?

There just aren’t enough opportunities that are open to Japanese actors. Luckily I am seen for, and sometimes cast in, non-Japanese/race specific roles but it is still very hard. You really need to start making your own work so that you’re not just sitting around waiting for the right role to come knocking on your door.

After 47 Ronin what can we expect to see you in next?

I have a small recurring part in a new ITV comedy drama called Edge of Heaven, which starts airing in spring 2014. There are also a couple of independent feature films coming out in 2014 too. Hopefully there are more things I can share with everyone very soon.