The British Courts and Extra-territoriality in Japan, 1859-1899 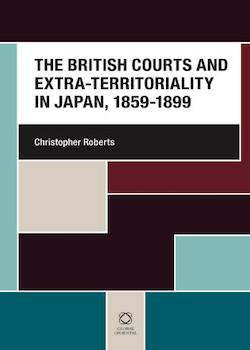 Dr Christopher Roberts is a British lawyer, who formerly practised law in Japan. He has contributed various portraits of British judges and lawyers who practised in 19th century Japan to the series Britain and Japan: Biographical Portraits. In this meticulously researched book, he presents a detailed account of the work of the British courts operating in Japan under the terms of the 1858 Treaty [see note 1].

As Roberts points out, the extra-territorial provisions of the Treaty were readily accepted by the Tokugawa bakufu as their main concern at the time was to have as little as possible to do with foreigners. If the foreign consuls were responsible for their own nationals, there was less likelihood of incidents occurring which might lead to foreign naval (or military) intervention. In the absence of anything approaching a modern legal system in Japan, the provisions were at that time a practical necessity.

The British at the time had no real knowledge of the way laws operated in Japan, but they must have realised that the samurai had special privileges, that regulations varied from fief to fief, that torture of suspects was common and that punishments were drastic and cruel. They also knew that Christianity was proscribed.

As Roberts notes, however, extra-territoriality, while it was regarded as a vital factor protecting the foreign merchants in Japan, did not totally dominate the life of the Treaty Ports. The merchants were there to make money. Administering the extra-territorial provisions of the Treaty, however, provided work for a significant number of British officials and was hugely time-consuming. It was hardly commensurate with the numbers of British subjects resident in Japan during those years. In 1881, for instance, there were only 1,127 British residents in Japan and 1,426 other Westerners.

In the final years of the bakufu, Yokohama was, as I have described it elsewhere, ‘a frontier town.’ Life was insecure. Apart from threats from two sworded Japanese ronin, fires were frequent and diseases prevalent. Some of the merchants were unscrupulous and arrogant towards Japanese whom they came across, while seamen from visiting ships often drank too much and patronised the brothels. Howard Vyse, the first consul in Kanagawa, advised residents to go about armed. He had no legal training and was eventually removed. Alcock, the first Consul General, inevitably improvised and the initial arrangements were at best inadequate. As soon as Sir Harry Parkes arrived as successor to Alcock, the arrangements improved and a properly functioning consular court system was set up.

In his book Roberts describes the court system and its operation in both criminal and civil cases. Most criminal cases were of a fairly minor nature, although there a small number of cases involving manslaughter and one of murder. This was the notorious Carew case when Ernest Satow as Minister commuted the death sentence, which the court in Yokohama had imposed on Mrs Carew, who had been found guilty of poisoning her husband [see Note 2]. A consular jail was maintained in Yokohama up to the coming into force of the revised treaty in 1899.

Most of the civil cases involved commercial transactions, but the majority of the work of the courts was related to shipping. Some of these were complicated and contentious, not least that resulting from the collision in November 1892 off Matsuyama between the Japanese naval vessel Chishima and the P&O Ravenna. As a result of the collision 74 out of 90 crew members on the Japanese ship were drowned. Dr Roberts devotes chapter seven to the litigation resulting from the accident. He comments (p. 284):

The incident and the ensuing cases exemplify many practical aspects of the operation of British extra-territoriality in Japan and how the two authorities balanced mutual co-operation to make the system work whilst defending their own interests amidst the emotion of the British community in Japan (and on the China Coast) and equally nationalistic Japanese elements.

Roberts concludes that while sometimes the local assessors (i.e. jury) were inclined to favour British litigants, the courts worked hard to maintain the law with fairness and objectivity. Difficulties often arose when men of other nationalities were involved. Other Treaty powers [see Note 3], which also had extra-territorial rights, lacked the resources and the will to exercise properly consular jurisdiction in relation to their nationals in Japan. No detailed studies similar to that made by Roberts, seem to have been made for other Treaty powers. Nor indeed has such a detailed study been made of the operation of British consular courts in other countries in which Britain had extra-territorial rights.

Extra-territorial rights continued in Japan for some time after Japan had adopted comprehensive criminal and civil codes and religious freedom had been guaranteed. There were various reasons for the delay including changes in the Japanese position. The logjam was broken when the British finally recognized that unless they took steps to reach an agreement the stalemate would continue and ill feelings would deepen.

Extra-territorial rights are now largely past history, but they are to some extent perpetuated under some Status of Forces agreements and during military occupations. British Commonwealth Forces taking part in the allied occupation of Japan established military courts, which could and did try Japanese who were accused of offences against them e.g. stealing property or taking part in black market activities involving goods available to British Commonwealth personnel. I do not know of any study having been made of this subject.

Christopher Roberts’ comprehensive and interesting analysis of the work of the British Courts in 19th century Japan is a valuable contribution to the history of Anglo-Japanese relations and of the work of British officials in Meiji Japan. It should also be of interest to legal historians.

1) The 1858 Treaty refers to the Treaty of Amity and Commerce (日米修好通商条約), which is also known as the Harris Treaty. It was signed between the United States and Japan on the deck of the USS Powhatan in Edo Bay on 29 July 1858. The treaty opened the ports of Kanagawa, Kobe, Nagasaki, Niigata, and Yokohama to trade and granted extraterritoriality to foreigners along with a number of trading stipulations.

2) In 1897 Edith Carew was put on trial for the murder by arsenic poisoning of her husband in Yokohama.

3) After having to sign the 1858 Treaty of Amity and Commerce with the USA, Japan soon signed similar treaties, called the Ansei Treaties (安政条約) or the Ansei Five-Power Treaties (安政五カ国条約), with Russia, France, Great Britain, and the Netherlands.