Across the Three Pagodas Pass: The Story of the Thai-Burma Railway 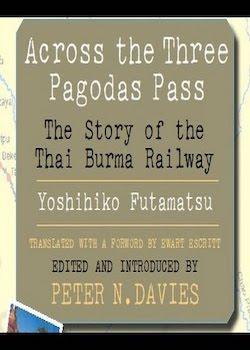 The sufferings of allied prisoners of war forced by the Japanese military to work on what was generally referred to as the Burma-Siam Railway and often as the ‘Death Railway’ have been recounted in many books by survivors. The film entitled The Bridge on the River Kwai attracted large audiences and many of those who saw it probably thought that it gave a fair picture of events, although this has been disputed by ex-prisoners of war and the story contained much that was fiction.

This book is the first publication in English of an account of the construction of the line by a Japanese railway engineer.

The line had to be built at top speed on the order of the Japanese army chiefs.  Japanese forces in Burma had hitherto been supplied by sea, but they had become increasingly vulnerable to allied air attacks and to maintain the Japanese position in Burma supplies and reinforcements were urgently needed.  Despite the huge technical and logistical difficulties of building a line through tropical forests, over many rivers and passes and the suffering inflicted not only on allied p.o.w. but also on local forced labour the line was completed in 1943 and enabled troops and supplies to reach the Japanese in Burma. But the line never came near to meeting its  load targets.  The original plan had envisioned loads of 3,000 tons per day, but it soon became clear that this target was far too high and the target was reduced to 1,000 tons.  Largely as a result of allied bombing ‘by 1944 the daily average was seldom above 300 tons (Peter Davies’ Foreword page xvi).

Escritt who had been forced by his Japanese captors to work on the railway and who translated Futamatsu’s book, recorded in his introduction:

‘Personnel employed on the railway included about 11,000 Japanese military, 61,106 prisoners-of-war, and 182,948 Asiatic coolies. Of the prisoners of war 12,399 were recorded as having died before leaving Thailand and Burma, and it has been estimated that over 90,000 Asiatic coolies died on this work.’

Many of the p.o.w. who survived their experiences on the railway were destined to die when prison ships taking them on to more forced labour in Japan were torpedoed by allied submarines. Some elements in the Japanese army planned to massacre prisoners remaining in Thailand if Japan was defeated, but the p.ow. were spared by the speed with which the war ended in August 1945 following the atomic bombs on Hiroshima and Nagasaki as there were plans for them to be massacred.

Futamatsu in his account quotes at length from books by G.P.Adams and J.B. Bradley who wrote about their experiences as p.o.w. forced to work on the line and recognizes that all who worked on the railway had a very tough time. He describes the hellish conditions caused by the climate including heat and rainfall, debilitating and fatal diseases including malaria, dysentery and cholera as well as by insanitary camps and inadequate food and medical supplies. The Japanese also lacked modern machinery and transport equipment which might have eased working conditions and speeded up the process. He also recognized that the orders to speed up completion added significantly pressures on all involved.

Futamatsu defends Japanese treatment of p.o.w. on the grounds that Japan had not signed and ratified the relevant Geneva Convention. He also argues that in the Japanese army corporal punishment for even the most minor infringements was the accepted norm and that in this respect p.o.w.were not treated differently from Japanese. Allied personnel had surrendered in a way that Japanese never would have done and that this at least in his view was a further justification for Japanese behaviour to their captives. This argument for inhumane treatment is unacceptable. There was not even these specious arguments for the Japanese exploitation of local slave labour.

‘Supervision by the engineers was based in getting maximum efficiency in what in fact was an emergency, so when the day’s work stint was extended each day’s norm was only achieved by coercion. Usually the prisoners did not have the services of an interpreter, their g-slow tactics often went too far and incurred severe scolding and harassment. Of course, the Japanese soldiers’ natural instinct involved contempt for them and this affected their behaviour. The severe nature of the work and the demand for speedy finishing of tasks did, I think, destroy any chance of kindly treatment.’

Futamatsu did what he was ordered to do even if he seems often to have thought his orders unreasonable and unfeasible. At one point a Japanese staff officer without adequate knowledge of railway engineering gave instructions about building the line up a precipitous path in an unrealistic fashion. His senior accepted the order and reprimanded Futamatsu for querying the order (see page 112): ‘Here was an example of how military ethics could make a soldier accept an illogical order.’ Obedience is demanded of service personnel, but in the Japanese army it had to be blind unquestioning obedience however wrong or stupid the order. As Escritt points out in his introduction ‘justifiable pride in the techniques and skills of a civilian railway engineer makes him sceptical of the professional regular soldiers’ attitudes’.

‘Even despite such conditions [as he had described] the railway was finally completed by the prisoners-of-war and coolies working with us. It is certain that the railway could not have been finished without their help. They defied the demon of ill-health and finished the job, and lamented the souls of the many victims whose bones lay in the jungle. It was probably the result of the indomitable spirit with which the survivors worked, even when it looked as if they were zealously labouring even in an enemy’s strategic railway.’

This was a tragic episode in a war, which Japan could never have won unless the Americans and their allies had lacked the ‘indomitable spirit’, which clearly impressed Futamatsu.

The first thing I looked for when I took the book up was a map showing the line. There is no reference to a map in the table of contents. Nor is there a list of the photographs, which are inserted after page 64, but the second illustration is a photograph of a sketch map drawn by Escritt.

Despite the fact that the railway, which no longer exists, was completed seventy years ago the publication of this book is a valuable addition to the history of the war and of the sufferings of those who worked on it.  The translation  by Escritt was produced in the 1980s but required annotation, revision and editing which Professor Peter Davies has skilfully done.