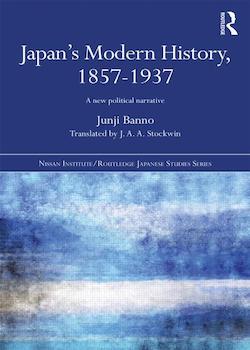 Professor Banno’s book was published in Japanese under the title Nihon Kindai Shi [日本近代史] in 2012. Professor Stockwin, the translator of this work and former director of the Nissan Institute at Oxford, in his introduction describes Professor Banno as ‘a prolific and widely read writer on the political history of modern Japan.’ This book is the story of ‘early attempts at reform, the dynamics of revolution, nation building, consolidation, reconstruction and finally crisis leading to war.’

Professor Banno’s book does not purport to be a comprehensive narrative of the political history of Japan from 1857-1937. It assumes that the reader has a fair grasp of the history of modern Japan and some knowledge of the personalities involved. It is thus a book intended primarily for historians as it is not an introduction to Japanese political history for the newcomer to the subject. It is, however, a significant contribution to the literature in English on modern Japan by an eminent historian. In the conclusion Professor Banno declares with humility that it is ‘composed with [his] personal judgments and prejudices,’ but wholly objective historical judgments are difficult if not impossible to achieve. The historian’s first need is to get his/her facts right and base their judgments on these and on the writings and diaries of participants and observers. Professor Banno follows these principles.

I was struck by the importance which Banno in the opening section of this book attaches to the role of Saigo Takamori [an influential samurai of the 1860s and 1870s] in developing a ‘multi-party alliance’ combining the faction which put priority on ‘opening the country’ and the group which emphasized ‘expelling the foreigner.’ I had not realized before reading this book how hard Saigo [西郷 隆盛] had worked to ensure that Choshu (an influential feudal domain occupying the whole of modern-day Yamaguchi Prefecture) was exonerated from the charges made against the fief of plotting against the court. I also found particularly interesting his comments on the power struggle between the lower ranking samurai and the leading daimyo. Banno clarifies the way in which the proposals for what he calls ‘a feudal parliament’ were sidelined and a national army created as a means not only of defense but also of unifying the country. I had not appreciated fully before how the participation of forces from Northern domains in support of Aizu [a western region of Fukushima Prefecture] had led to the low priority given to the Tohoku region [northeastern part of the main island of Honshu] in the post-revolution development of Japan.

Banno is frank about the way in which Japan adopted ‘gunboat diplomacy’ in its relations with both Korea and China. He notes that ‘the first person in the Meiji Government to express the view that China was a threat was perhaps the Chief of the General Staff at the time’ [November 1880] Yamagata Aritomo [p.104]. He emphasizes [page 123] that from the time of incidents in 1882 and 1884 ‘a direct confrontation between Japan and China over control of the Korean peninsula was only a matter of time.’ The Sino-Japanese war of 1894/5 led to the strengthening of the military who grabbed the indemnity which Japan obtained from China. The appetite of the Japanese armed forces grew again after the Russo-Japanese war of 1904/5.
Banno has some interesting comments on the Japanese constitutional provision under which the leaders of the army and navy had the right of direct access to the Emperor and a veto on the appointment of the army and navy ministers. This was undoubtedly an important factor in Japan’s drift to war, but other factors were the inability of Japan’s political leaders to agree on consistent policies and win popular trust, and ultimately the unwillingness of the Kanto army in China to obey orders from Tokyo. He notes incidentally [page 170] that Korekiyo Takahashi [高橋 是清], who was an outstanding Minister of Finance, was unpopular with the genro [elder Japanese statesmen] because he advocated the abolition of the General Staff office.

Banno gives an interesting account of the problems which Meiji governments faced in raising revenue, in particular over the land tax. He elucidates the development of relations between the government and the Diet and the important role played by the bureaucracy. He has much of interest to say about the development of political parties in Japan and the personalities of Japanese politicians. In his comments on such issues as universal male suffrage he draws attention to the role of Sakuzō Yoshino [吉野 作造], who advocated what he termed minponshugi later called ‘democracy’ in the years 1916-20. He is scornful of the assertion that Kei Hara [原 敬] was really the progenitor of what came to be termed Taisho democracy pointing out that Hara was opposed to universal suffrage and refused to endorse a two-party system for Japan.

I cannot in this review do more than refer to some of the important themes in Banno’s book, but I hope that I have shown why this is a valuable book for the serious student of modern Japanese history.

Professor Stockwin has obviously worked hard to produce an accurate translation of Professor Banno’s text, but it is not an easy read and I did wonder whether a freer translation or paraphrase in English might have resulted in a more easily readable text.

It is a great pity that this book is so expensive not only in hard back (over £90 from Amazon) but also in the electronic version (£85). This inevitably means that many students of Japanese history will be forced to consult the book in libraries rather than have a copy on their bookshelves or even in their electronic books library. The costs of production of scholarly books, for which sales of more than a few hundred copies cannot be expected, are high, but for important works such as this it should be possible to attract subsidies sufficient to ensure that the electronic version at least is available to serious students at a reasonable price.