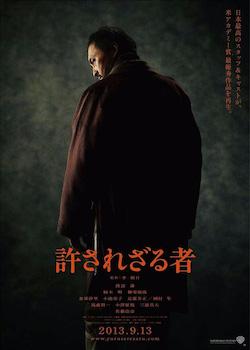 The original Unforgiven was a major critical success, hailed as one of Clint Eastwood’s best films and considered one of the finest westerns ever made. It didn’t glorify violence or sugar coat any of the hard truths faced by the killers or their victims, but had a philosophical, existential form that was well-crafted alongside the minimalist cinematography and dialogue. The most surprising thing about this remake, directed by Korean Lee Sang-Il and starring Ken Watanabe, is how closely it sticks to the source material, and how successfully it does so considering the wildly different settings. It may replace some of the meditative feel with a visceral aggression, which doesn’t – despite its best attempts – make the film any more emotionally impactful, but it still remains incredibly close to the original.

When the Shogunate is defeated and his reason to fight has been torn away from him, Jubei Kamata (Watanabe) is forced to flee from the pursuing opposing forces. Jubei, exhausted and clearly desperate, defeats the soldiers in the snow-laden woods, before disappearing. Many years later, Jubei is now living with his two children on a small and remote farm, completely isolated from the outside world. This isolation, however, cannot hide him from his past. The movie does a great job of recreating the small farm setting from the original, and the wide panoramic shots in the sunset are nostalgic for those familiar with Eastwood’s film. This familiarity can be felt throughout the movie, with scenarios being recreated and, more importantly, certain dialogue (or at least the translation of dialogue) being identical to the original. Strangely, however, some of the more profound and memorable script (‘we all got it coming, kid,’ being a notable exception) is absent. Watanabe, as Jubei – the name of a traditionally heroic figure in Japanese legend – does a good job with his delivery, and portrays a grief-stricken man very well, despite lacking the stoic presence and subtlety of acting that Eastwood oozes. This lack of subtlety – something that critics would say Japanese filmmaking lacks in general – does feel ill-placed in certain scenes, but the film as a whole remains understated.

It is while Watanabe is on the ranch, that his friend Kingo (Akira Emoto) visits him and asks him for his help with a bounty placed on two men by a group of prostitutes. The men are said to have cut the face of one of the women, leaving her horribly scarred. Kingo refers to Watanabe as ‘Jubei the Killer’, giving us an indication of his infamy. After consideration, Jubei sets off to the town with Kingo. Here the story diverges from the original, in which the younger Schofield Kid tries to recruit Eastwood, before Eastwood, as Munny, approaches his friend. This, along with the more comic version of the kid – a representation of the naivety and innocence that is drawn to violence, followed by its disillusionment – creates a different dynamic among the trio. And while the kid, played by Yuya Yagira, is probably the weakest character, his origin and ethnicity as an Ainu adds a new element to the story, representing the biggest divergence from the source material. Where the undesirable element of the original are mainly those who go from town to town and bounty hunters, the undesirables here are the Ainu race.

The Ainu, indigenous to Japan, underwent a similar – though less severe fate, as did the Native Americans. They were mainly shunned and ostracised, being considered little more than barbarians. In Unforgiven, as towns grow and the expansion of commerce spreads throughout the forest, there is little room left for the Ainu with their simple practices and pagan religion. As the kid and Jubei’s deceased wife are both of Ainu ancestry, this racial tension between them and the authorities adds a depth to this version that the original lacks.

Also a welcome addition to the film is the focus on the prostitutes’ plight, as they begin to realise the tragedy they have set into motion. This is also shown in the original, although I feel that it is more fleshed out here, giving an insight into a group that were considered unimportant beyond their practical uses, considered as only slightly more deserving of compassion than animals.

In an age where remakes are perhaps more common than original ideas, it is still difficult to pinpoint exactly what it is that so often makes them inferior. Of course, for anyone familiar with the original, the remake could never have the same initial impact. There is also something intrinsically pointless about another version of a movie that is already critically acclaimed and loved. The remaking of foreign films – more common in reverse, with Japanese films being made into American – is a different challenge altogether. A film is often made out of a social matter that is personal to that particular country, to a set of beliefs which are indigenous there. It can feel strange when we take those social issues and thrust them into a new environment, where they don’t have the same gravitas. Unforgiven, however, has done very well with these challenges, creating a new tension and doing a great job of transferring the remainder into a foreign context. Perhaps this is a testament to the universal appeal of the original. This transference, however, is where most of the films strengths and weaknesses lie. The kid, for example, has undergone a necessary transformation – an aspiring samurai would make a lot less sense in an age where they are becoming obsolete, than an aspiring cowboy assassin – and his Ainu roots create an interesting tension. In this process, however, he has also become more comical, less believable and likeable, making his later regret less meaningful.

Overall, this remake does a great job of transforming a familiar idea into a new context. With its amazing scenery and impressive cinematography, it is a treat for the eyes, but it lacks some of the depth and philosophy that Eastwood’s film seemed to intertwine so effortlessly. Fans of the original may find certain scenes and dialogue nostalgic, but those same fans may wonder about those that are missing.