Tango at the End of Winter 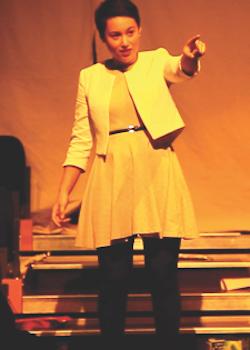 Sei is a middle-aged actor, once brilliant, but now fading. His wife orchestrates a love affair between him and a younger co-star to reinvigorate his career and help him find the brilliance of his youth once more. But her plan back fires when Sei actually falls in love. Now three years later he’s a recluse living in his childhood town, losing himself in dreams, Pirandellian fantasies and memories of his youth – in particular, the memory of a stuffed peacock that he once stole.

Richmix, close to Shoreditch High Street station, is a charming little venue, one that has long supported the arts and culture and is a perfect fit for the Queen Mary Theatre Company’s production of Kunio Shimizu’s Tango At The End Of Winter. It’s rare I go in to performances as blind as I did for QMTC’s production; even with my love of Japanese culture I must admit to never having heard of Tango and I had determined, for once, to keep it that way until seeing the actual show. So I went in not really knowing what to expect.

One thing I did not expect for such a small production was the great staging. At first it appeared quite bare, but a lot of thought had clearly gone in to what was on display. Upon entering we were greeted by the stark white backdrop of a cinema screen and – a surreal touch – snow upon the floor; actors dressed in white stand to each side of the stage. The general impression is one of order. Throughout the production the stage rarely saw any change other than the odd chair moving around. The cinema screen to the back played scenes or memories from Sei’s past, played out through the actor’s silhouettes – a nice touch, as memories have been said to be shadows in our minds. The whole play is set within this cinema, which is Sei’s childhood home. It’s interesting that the Cinema resembles Sei so much, once popular, now almost forgotten. Rubbish and old keepsakes are scattered around the floor, and litter is everywhere, contrasting nicely with what at first appeared to be a straightforwardly ordered tableau. It evoked the feeling that we were seeing into Sei’s broken mind, littered with memories.

The play was well performed by the young cast, and the chemistry between them was apparent throughout. Sei (Liam Lemkin) and his brother Shigeo (Bruno Cooke) played off one another nicely. Special mention though, should go to Peter Walker, who played Ren with manic energy, and Annabelle Sami (who also directs) as Sei’s wife Gin. Gin – a woman so determined to see her husband return to greatness that she would sabotage both her marriage and Sei’s sanity – is a difficult character to like. The fact that I came out feeling sympathy for her is down in no small part to the understated and thoughtful performance of Ms. Sami.

The only parts that stood out to me about this production as jarring slightly were the pre-recorded audio sections. Often they would play out excessively loud and would break the otherwise carefully-crafted sense of immersion. It’s a small niggle in an otherwise great production.

The play manages to be funny, as well as heart achingly sad – typically a difficult combination to manage, but the performers here dealt with the shifts in tone easily. It’s nice to leave a performance felling determined to find new material. I’ve never really looked in to modern Japanese theatre before and this performance made me feel as though I’ve been missing out. Although this was a one off performance I would definitely recommend catching the play when you can.