Men to Devils, Devils to Men 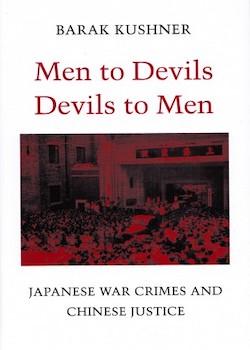 ‘War crimes’ judged at the international tribunal at Nuremberg were divided into three categories. Class A were ‘crimes against peace,’ class B were ‘conventional war crimes’ (such as rape, murder, illegal incarceration, abusing POWs etc.) and Class C were ‘crimes against humanity’ such as genocide. Class A war criminals in East Asia were tried by the International Military Tribunal for the Far East (IMTFE) in Tokyo. The trial lasted two and a half years. Although Barak Kushner deals in his book with aspects of the IMTFE his focus is on Class B and C war crimes and the way in which trials were held in China/Taiwan. He stresses that war responsibility and war crimes are ‘two different species.’ Kushner is senior lecturer in modern Japanese history at the University of Cambridge.

Barak Kushner’s book ranges widely and deals not only with the definition, nature and legal aspects of war crimes. It is based on meticulous and detailed research in Chinese (and Taiwanese), Japanese and American records. He notes that the trial records (p.20) bequeathed a legacy of historical records about Japan’s military action in China.’

Kushner draws attention to the relative absence of desire for revenge as shown by Chinese treatment of Japanese guilty of war crimes. It covers aspects of Japan/China relationships, which are relevant to our understanding of the issues between the two countries today

Kushner’s first chapter headed ‘Defeat in Denial, The Regional Impact of Japan’s Surrender’ reminds readers that the Japanese military in China were reluctant to accept orders to surrender as they did not see themselves as defeated. Even though officially hostilities were over, Japanese forces remained in control of vast areas of China for some time after the official surrender. If all Japanese forces had been immediately disarmed, there would have been chaos in parts of China. The same was true of parts of South East Asia. In the Netherlands East Indies (NEI) and in French Indo-China the allies were at first dependent on Japanese military guards.

The occupying forces in Japan were concerned that the large number of Japanese returning from China who did not feel that they had been defeated might pose a security threat to the relatively weak allied forces occupying Japan. Many Japanese who had lived in China and Manchuria had indeed hoped to be able to stay.

The Japanese authorities, aware at the end of the war that war crimes trials were inevitable, made some half-hearted efforts (p.51) to ‘chase its own war criminals.’ ‘The pursuit of justice appeared secondary to the aim of mitigating any blemish on the imperial prestige of Japan – seemingly unsullied even with the unconditional surrender.’ One argument made on behalf of those accused of war crimes was that the crimes were ‘merely “over-exuberance” on the battlefield or, rather, the natural by-product of a fierce war.’ Another Japanese report (p.54) argued that B & C class crimes trials were ‘misguided revenge, publicly permitted under the guise of legality.’

The Japanese navy tried particularly hard to exonerate their personnel. A group led by a Captain Toyota (p.56) worked tirelessly to encourage former naval officers to lie under oath during Allied court proceedings.’

Accusations were made that allied war criminals e.g. aircrew who carried out indiscriminate bombing of civilian targets in Japan went unpunished. Some Japanese also argued that Japan was more a victim than a perpetrator.

Japan continues to suffer from amnesia about its imperial past (p.230). Up to the surrender, Japanese official propaganda maintained that its soldiers did not give up until death. As soon as the war ended, the Japanese were very intent on saving from execution those charged with war crimes. As Kushner points out (p. 314) ‘Japanese politicians continue to debate legal minutiae in a manner that indicates an inability to come to terms with the BC class war crimes trials.’ Prime Minister Shinzo Abe in response to questions in the Diet demonstrated in this context that he is a master of obfuscation and avoiding responding to a direct question.

Kushner has no doubt (p.63) that while ‘egregious legal errors in trials did occur and should not be ignored, imperial Japanese soldiers did commit grievous acts of random violence, especially in China.’

Chapter 2 ‘Devil in the Details’ outlines Chinese policies on Japan’s war crimes. The Chinese had much to learn about international law, but their responses were complicated not only by the extent of Chinese collaboration with the Japanese in China but also by the extent to which the Chinese Nationalist Party (KMT) government were dependent on Japanese help in pursuing their civil war with the communists. Kushner notes (p. 103) that ‘some war criminals…were pawns in the realignment of power during the immediate aftermath of the war.’

The situation in Taiwan which he scrutinizes in his third chapter headed ‘Flexible Imperial Identity’ was even more complicated than in mainland China, as the island had been under Japanese administration for over half a century when the war ended. Taiwanese had been recruited into the Japanese forces. Some of them had served as guards at POW camps and together with Koreans and Japanese were accused of maltreatment of POWs.

In Chapter 4 Kushner discusses KMT (Kuomintang/Guomindang = 国民党) trials of Japanese war criminals. He points out (p.153) in commenting on the notorious Nanjing massacre that ‘there were actually many imperial Japanese military massacres on the way to the city. Nanjing was not an isolated incident.’ As General Iwane Matsui, who was regarded as having the main responsibility for the massacre, was indicted before the IMTFE in Tokyo, the KMT concentrated on trying Hisao Tani, another Japanese general. One charge among many (p.160) was that he had commanded ‘a platoon that murdered 122 souls, wounded 334, bayoneted 14, and assassinated and raped numerous others.’ Tani who denied all the charges was found guilty and executed.

Another example of a senior Japanese officer indicted in 1948 was that of General Yasuji Okamura, commander of the China Expeditionary Army, which adopted a policy (p.70) termed by the Chinese the ‘three alls’ policy of ‘kill all, burn all and loot all.’ He was tried by a Chinese Nationalist Military Tribunal, but on 26 January 1949 despite convincing evidence against him was found ‘not guilty.’ The court had been ‘advised’ to come to this conclusion because Okamura and his fellow conspirators in the ‘White Group’ were thought too valuable in helping the KMT in their struggle against the Chinese Communist Party (CCP).

In another trial of an ordinary soldier, Kiyoshi Sakakura (p.64) confessed that he had taken part in one operation in which women and children were rounded up with bayonets and killed.

A further case, which Kushner discusses in some detail, is that of ‘The 100-man Killing Contest,’ involving two junior officers Toshiaki Mukai and Tsuyoshi Noda. The Japan Advertiser on 7 December 1937 (p.167) reported this horrifying incident under the headline ‘Sub-Lieutenants in Race to Fell 100 Chinese Running Close.’ Whatever the truth about the details of this crime it is a gruesome story.

The KMT trials despite some flaws seem to have been reasonably well-conducted and Japanese war criminals were not made the objects of revenge.

Kushner deals in his chapter 7 entitled ‘Socialist Magnanimity’ with the trials of Japanese war criminals by the CCP. Many of these came into their hands after internment in the Soviet Far East. The ‘vast majority of Japanese prisoners (p.259) were released after extensive investigation of their crimes where the government chose not to indict, either on grounds of benevolence or because the prisoners had sufficiently recanted and “learned” from their time during incarceration.’ In the CCP trials every single Japanese admitted their crimes. ‘Unlike the KMT’s goal of merely seeking justice, Communist China’ s aim for its Japanese prisoners…was to make war criminals reflect on their crimes, and to turn them from “devils back into men.”’ The CCP were expert at brainwashing.

This book is an important contribution to the history of the years immediately following the end of the war in East Asia. It is full of interesting and valid comments and reminds readers of facts which tend to be overlooked not least by Chinese and Japanese historians.