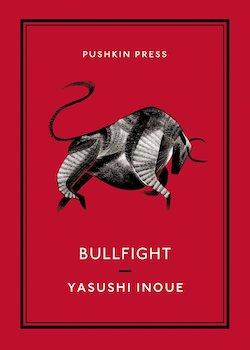 Bullfight won Inoue the Akutagawa Prize in 1949, which is considered the most prestigious literary award in Japan. This was his second published work in a prolific career that saw him go on to write fifty novels and one hundred and eighty novellas. In a personal and thoughtful afterword included in this edition, the author tells us that, while he did write this book in his forties, he believes that he was then a green author, with much still to learn. He does, however, say that this work was one of the fundamental pieces of his career, and therefore leaves an indelible mark on his later books.

During the aftermath of the Second World War, in a decimated Osaka, Tsugami, the editor-in-chief of a small newspaper agrees to sponsor and arrange a bullfighting contest. Over the months that follow he becomes consumed with the event and, while problems arrive in droves, he begins to question whether or not his business partners are trustworthy, fearing that the event will become a failure. As a backdrop to this story is Tsugami’s relationship with the war widow, Sakiko, who, as her conflicted feelings for him clash, is not sure whether she would like to see this venture succeed or destroy Tsugami. This relationship has more depth than the usual cruel ice queen at home scenario that is prevalent in some Japanese literature. Tsugami has, as Sakiko calls it, ‘an unsavoury side’ that is stirred up by any type of challenge. She believes that this new challenge is not only somewhat in bad taste, but also immoral. She also knows that Tsugami’s nature will not let him back away, even if it was to his detriment. The narrator comments also that:

‘When someone put a knife to Tsugami’s neck, it was in his nature to press his own blade to the antagonist’s, to keep pressing it in, watching the sharp edge; then, after the agitation of the moment had faded, he would look back in disbelief at what he had done.’

The content and theme of the story may naturally lead us to draw comparisons with Hemmingway, but this is not a story about the attraction of sport, or the psychology of a sportsman. It is not the bullfight itself that that drives Tsugami – very few of the central characters take any interest in the matches once they begin – but a need for distraction and a means to push on and away from the defeat that is apparent all around them, even if it is through further, third-party aggression.

There is a strong feeling of a reluctance to ‘pass the torch’ to the younger generation throughout. An old and shrewd business man, Okabe, is treated with suspicion by Tsugami, but he is dismissive of  another businessman, Miura, who represents an even younger generation. Tsugami is stuck in an unfortunate twilight, unwilling to trust the older generation that guided them to their current predicament, or believe in the new generation, personified by Miura, who he sees as brash and reckless. This tension is representative of Japan after the Second World War, where the younger generation were becoming disillusioned with their elders. For Japan, who had for so long relied on a strict code of filial piety, this was a marked evolution, and one that not everyone was comfortable with. This tension and anger did, however, create some of the country’s best recognised authors.

Just as it is now impossible to read The Great Gatsby as anything but a metaphor for the start of the Great Depression, it is difficult to view Bullfight as anything other than a metaphor for the Second World War, and the clues are frequent throughout the novella. While the higher-ups manipulate common opinion and generate enthusiasm for the bullfight, no-one is thinking about the economy or their unmet daily needs. In all of this fervour, the characters also completely forget about the bulls, the perfect representation of the soldier,  who are being made to fight for everyone else’s peace-of-mind. This is summed up brilliantly as, when two bulls fight to a vicious stalemate, the crowd is asked to clap if they wish them to continue until one is defeated or killed. As soon as the bulls have finished fighting and they have fulfilled their purpose, Okabe is already to be found choosing those that would be suitable for food. Tsugami, despite the failure of the tournament, is described as being left unscarred. He has become numb.

Echoes of the war are inescapable for the characters. On New Year’s Eve, Sachiko and Tsugami take time to listen to the temple bells, in a scene that resembles an air raid:

‘They heard the bells being struck at regular intervals, nearby and far away, their countless reverberations all layering and colliding, echoing into each other, flowing like a hundred streams through the crisp midnight air.’

These dual-layered moments of normality and concealed peril are a constant in the book, acting as a haunting echo that dogs the protagonists.

The translation is very clear and easy to read. A lot of the dialogue is quite casual, possibly an attempt to represent  the Kansai dialect, which is often considered more direct than its Tokyo counterpart (the relationship is actually very comparable to the traditional English north and south divide – Osaka traditionally being seen as friendly but uncouth by Tokyo citizens and vice versa). This Pushkin Collection edition, intended to feel comfortable in the hand, is of a fine quality, with a textured cover and thick, high quality paper.

Overall, this novella is good way to spend a few hours. It is rich with imagery and meaning that few novels manage today, it being a product of times that were much more tumultuous than our own. You may not relate to the rather selfish characters, but you will find some of them amusing and others pitiable, while the story flows very nicely to the open ending that is somewhat inevitable – in no small way due to the uncertainty of the times – from the first page. All in all, a good read.

Bullfight is published by Pushkin Press, established in 1997 with the aim of publishing European classics. Their scope has recently widened to include Japanese literature, with many of Ryu Murakami’s works also being released.