Life of a Counterfeiter 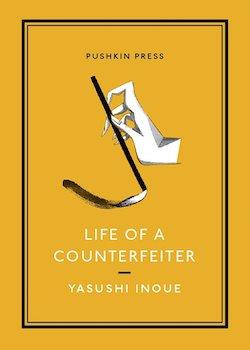 Born in 1907, Yasushi Inoue worked as a journalist and literary editor for many years, only beginning his prolific career as an author in 1949 with Bullfight. He went on to publish 50 novels and 150 short stories, both historical and contemporary, his work making him one of Japan’s major literary figures. In 1976 Inoue was presented with the Order of Culture, the highest honour granted for artistic merit in Japan. He died in 1991.

The three stories collected in Life of a Counterfeiter take place, like Inoue’s celebrated Bullfight, shortly after the war; defeat is still an open wound, and the future a grim prospect, although again like Bullfight the war rarely appears as more than an unspoken backdrop, alluded to implicitly in the social climate and sometimes in subtle but striking imagery such as a firework display. The titular ‘Life of a Counterfeiter’ is the longest of the three pieces, with both ‘Reeds’ and ‘Mr Goodall’s Gloves’ being brief meditations on memory and the seemingly insignificant moments that affect lives. Running through these stories is a nostalgic yearning for more prosperous times. Inoue does incredibly well to infuse these seemingly event-less stories with meaning, lent extra weight by his refreshing sense of economy.

‘Life of a Counterfeiter’ sees a journalist tasked with completing an autobiography of the late, lauded artist Onuki Keigaku. The journalist struggles with starting the work and, aside from assembling a slapdash timeline, cannot muster the energy to continue. When, after 13 years, an invitation to the anniversary of the painter’s death arrives and the journalist is forced into action, he finds that it is instead Hara Hosen, a friend and notorious counterfeiter of Keigaku’s, that captures his interest.

As the journalist stumbles upon more of Hosen’s forgeries, he finds an equal, if not greater, beauty . When he then uncovers a rare original, he is mesmerised. What begins as a simple tale of a critic hailing the talents of a great becomes an ode to the under appreciated artists lost in their shadow.

In ‘Reeds’, another (or perhaps the same) journalist reads a story in the newspaper of a man who discovered his lost son, only to find the boy has no recollection of him. This leads the journalist to doubt his own memories and to seek to confirm them with his parents, but his efforts are typically in vain. This story is rich with philosophy on the subjective nature of memory and Man’s need to create a shared history in order to give life significance.

‘Each of us holds one or two cards that have been in our hands for years, who knows why, while the cards that should have been paired with them have disappeared.’ (Page 87)

The protagonist, unable to verify his hazy childhood memories, is left to doubt his own version of the truth (‘I hold one card in my hand but my parents have lost its pair’). Recalling a particularly old memory, featuring a kindly, beautiful girl, the protagonist learns that it is his Aunt Mitsu, who died when still young. Having known her as a woman of ill-repute, he inquires with his family and re-analyses his own memories. Over time, his opinion of his aunt evolves and he is left with the belief that, although Mitsu died young, she created many ripples in the world that will ensure she is remembered.

‘Mr Goodall’s Gloves’, set during the Meiji restoration, is unique in that it is the only story to feature a Westerner. A tale where small actions have deeper meanings, it tells the story of a young boy living with his grandmother – another woman of questionable repute – who enjoys telling him stories about his grandfather and the man he idolised. As the grandmother ages and ails, her stories take on a tone of nostalgia. What begins, however, as another portrayal of the ordinary citizen’s awe for the great, slips beautifully into an intimate portrayal of an isolated woman bringing up a child alone. When, one day, the child finds a pair of gloves that are too big to fit the hands of anyone in the village, the grandmother tells him the story of her encounter with Mr Goodall.

Sometimes meandering to and fro so that it’s hard to believe there could be a common theme amongst the author’s whimsical strokes, Life of a Counterfeiter always manages to reassemble its wayward parts and create an instinctual poignancy, a feat that only goes to illustrate Inoue’s skill. Still a relative unknown outside of Japan, many critics consider him to be woefully underappreciated. On this showing it’s hard to argue with them.

A note on the edition: The Pushkin Press series is incredibly well-presented and impeccably designed. At just the right size to be held comfortably, and with high-quality paper and a pleasantly textured cover, they really are a joy to read. The translation here is also near faultless and is in line with Inoue’s economy.