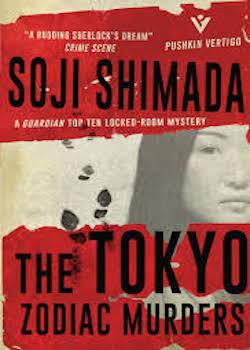 Selected for the new ‘Pushkin Vertigo Collection’ from Pushkin Press, The Tokyo Zodiac Murders marked the debut of established crime writer, Soji Shimada, whose subsequent fame at one time forced him to escape Japan for Los Angeles. While the book was shortlisted for the Edogawa Rampo Award In 1981, Shimada himself was awarded the Japan Mystery Literature Award in 2009 in recognition of his life’s work. His detective novels are ‘Honkaku’ – or, ‘genuine’ – mysteries, where emphasis is placed primarily on plotting and clues in lieu of social commentary or the psychological insights that have become a staple of contemporary crime fiction. In metafictional asides, Shimada even addresses the reader directly, challenging them to solve the mystery before the end of the novel. While well-implemented, this technique can lessen the reader’s immersion in the story, the book then feeling less of a narrative and more of a puzzle or How To guide; the Interplay between the characters becomes a simple sounding-board exercise, leaving the dialogue feeling forced. If puzzle-solving is the reader’s main point of enjoyment from a detective novel, however, it should not prove such an obstacle.

In 1930s Tokyo, an eccentric artist is found dead by his seven residing female relations, inside a room that appears to have been locked from the inside. With the body is discovered a note, detailing the deceased’s plan to murder his relatives in an occult ritual to create the perfect woman. Soon after the murder, the plan is carried out and the dismembered bodies of the victims are found in varying locations across Japan. The police have no leads. By 1979, these murders, dubbed ‘The Tokyo Zodiac Murders’ because of their link to astrology, have been fascinating the nation for forty years. When the mystery-obsessed Kazumi Ishioka approaches his talented astrologist friend, Kiyoshi Mitarai, with a new lead, they set out to solve the crime.

There will be something familiar for all readers in The Tokyo Zodiac Murders, despite its unfamiliar locations. While the locked room mysteries are reminiscent of an episode of Jonathan Creek, the relationship of the two protagonists will at once be recognisable as an iteration of the Holmes-Watson dynamic. Perhaps this isn’t surprising given that novels and television shows alike have used this formula to good effect over the years. The problem here, however, is the lack of evidence provided to back up their supposed traits. The reader is asked to believe that Ishioka is the well-meaning but less gifted sidekick to Mitarai’s troubled genius, despite these tags rarely holding true. Perhaps this is due to the fact that this is Shimada’s debut. Ishioka and Mitarai have now appeard together in many novels, gaining cumulative history with each story. In this first instalment, however, this chemistry and depth is lacking.

In the second half of the book, the reader is left alone for stretches with Ishioka. These sections, despite being grounded in a well-realised Kyoto, are the weakest of the book. It is not so much the rapport of the two that is missed – as mentioned, this isn’t overly evident anywhere – but rather the obvious futility of all Ishioka’s endeavours. The reader is not so clueless as to believe that the sidekick would ever solve the crime – or indeed, that any of his deductions could be of use. That isn’t how the Holmes-Watson formula works. The result of all this is that these sections fulfil the role of merely padding out the story, while the reader impatiently awaits the denouement.

One problem in particular that Western audiences may encounter, not being able to rely on the distinctive kanji (Japanese characters), is the sheer number of names with which they are bombarded at the beginning of the book. Paired with the foreignness of the language is the fact that many of the names are similar, almost all the victims’ forenames ending in ‘Ko’. While true to the reality of Japanese child naming, it causes unnecessary confusion in a story that is already purposely intricate and baffling. Indeed, at the end of the exposition, the author tells the reader that they already have sufficient clues to solve the mystery, but such is the volume of information that it would take a great feat of memory to do so.

The mystery itself is intriguing enough. Shimada does a great job of restricting enough information to keep the reader believing more is needed to solve the crime, despite several asides to the contrary. These asides add levity to a story that is in reality very macabre, and this juxtaposition of tones may not sit well with all readers. The references and descriptions of astrology are also a point that may divide opinion. Deeply involved in the subject himself, Shimada is not sparing with these – indeed they hold considerable relevance to the mystery. Those interested in this field may enjoy this novel more than sceptics.

The decision as to whether or not this is a worthwhile read will depend heavily on the preference of the reader. If they are happy to forego a rapport between hackneyed characters and bear with some clunky dialogue in favour of the cathartic rush of solving a seemingly impenetrable mystery, then The Tokyo Zodiac Murders will furnish them perfectly well. Those looking for something narratively adept, and with well-realised and original characters should look elsewhere.