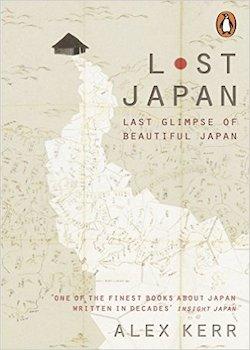 Since its original publication in 1993, Lost Japan by Alex Kerr has stood within the ranks of the more revelatory and nuanced works in a long line of publications unpicking the seeming exoticism and essential unfamiliarity of Japanese history and culture. From the very first page readers find themselves being guided through the author’s extraordinary Japanese journey through vivid accounts of traditional Japanese life, from the dramatic landscape of Shikoku to the dressing rooms of Tokyo’s most exclusive theatres and tea houses. The narrative throughout expresses not only the author’s passion, but also a personal lament for what he perceives as the deterioration and loss of Japan’s native traditions, comprising an ardent and heartfelt plea to Japanese readers to sit up and take pride in their national heritage before it is gone forever.

The somewhat esoteric and obscure themes explored by this connoisseur of Japanese culture are enlightening and novel, featuring subjects such as traditional thatching (a subject on which had a great deal of first-hand experience having twice rethatched the kayabuki roof of his two-hundred-year-old Japanese house in the Iya Valley), kabuki rituals and a brief history of the exquisite world of Japanese calligraphy and antiques. Kerr’s passionate, animated writing style lifts these weighty subjects off the page and into the reader’s imagination, bringing to life vivid scenes from a past world. Although the primary focus of the author is very much on the past, he does not neglect modern Japan, and presents sobering and insightful accounts of contemporary Japanese politics, economy and architecture to set the scene in a much wider context.

Like many who have spent long periods in Japan, Kerr has a distinct conflict of emotions regarding the country he now calls home, and his writing frequently lays this bare. On the one hand he expresses impassioned admiration and praise for the native culture, while on the other he suggests a thinly veiled sense of disapproval for what he sees as the modern Japanese disregard for their past. This reprimand sets the tenor of the book and seems to be directed at a largely apathetic urban Japanese audience which the author feels needs reminding of its nation’s origins. As acknowledged by the author in his prelude, Lost Japan was intended for the Japanese reader (it was first published as Utsukushiki nihon no zanzō, Last Glimpse of Beautiful Japan), with the translation and publication for western audiences somewhat of an afterthought; as a non-Japanese reader I did indeed feel a little outside of his focus at times, but nevertheless found the themes and subject matter stimulating and compelling.

With Penguin’s re-release of Lost Japan there is now the opportunity for a new generation of Japan enthusiasts to wander through this curious and complex mixture of biography and history. This nostalgic and evocative world is brought to life by Kerr’s expressive writing, which issues a clear and heart-felt call for the preservation of the fading jewels of Japanese culture. His stories evoke a vivid sense of a disappearing past which is likely to capture the imagination of any reader and inspire a desire to (re)visit and read further into this fascinating culture and history.