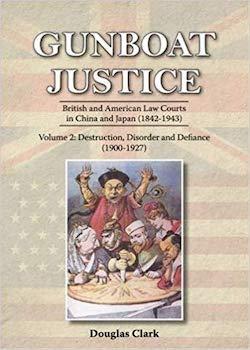 Douglas Clark is a practising lawyer in Hong Kong who has lived and worked there and in China, Japan and Korea for over 25 years. In these three volumes, he looks at the workings of the British and American Courts in China and Japan during the days of extra-territoriality. This subject has been achieving greater coverage in the literature in recent years. Clark’s particular contribution is bringing these courts to life through the personalities of the judges who sat in them, the lawyers who appeared in them and a large number of the litigants – both well-known (or notorious) and those who would otherwise have remained unknown to history.

He uses the individuals’ life-stories and the human side of the cases that came before the courts to tell the story not only of the extra-territorial system itself in Japan and China but also of expatriate life in those two countries – particularly Yokohama and Shanghai.

Clark has scoured the archives, journals and relevant family records for photographs and sketches of the principal legal players so as to build up a fairly comprehensive picture gallery of them all – the most comprehensive one published to date. In addition, the text is lightened by apposite cartoons and sketches from contemporary publications. He has, where possible, spoken to descendants of those involved in administering British and American justice in Japan and China and recorded much anecdotal family information. This all adds to the highly personal and colourful nature of the book. He has also examined the personal papers of Sir Hiram Shaw Wilkinson, one of the British lawyers and judges – in both Japan and China, that are held in the Northern Ireland Public Record Office and brought to light new points on Wilkinson’s career.

Of course, extra-territoriality had a longer history in China (1842-1943) than in Japan (1859-1899) and so nearly two thirds of the narrative focuses on China. Japanophiles will be principally interested in Volume I, the first third of Volume II and the huge middle section of Volume III. Volume I’s coverage is divided almost equally between coverage of Japan and China. It covers the period from 1842, when the British first obtained extra-territoriality in China, through 1859 (when foreign extra-territoriality came to Japan) up to 1899 when Japan ended all foreign extra-territorial rights in its territories. This switching between Japan and China demonstrates how, during this period, the practice of foreign laws was intermingled between the two countries. Not only did the individual judges of the time have first-hand personal experience of both countries; but so did many of the lawyers. Decisions and approaches in one country influenced approaches in the other. There was also considerable social intercourse between the expatriate communities in both countries – particularly as many expatriates in China saw Japan as a place of retreat from hot Chinese summers.

The first third of Volume II will interest Japanophiles for two reasons: one, it covers Wilkinson’s Chief Justice-ship (1900-1905); secondly, it looks at the 1907 and 1908 trials of Ernest Bethell in Seoul at the instance of the Japanese authorities there. Thereafter, Volume II is principally of interest to Sinophiles; as is, in many ways, Volume III. However, Japanophiles may find Volume III interesting for its coverage of the inter-play between the British (and American) authorities and the Japanese authorities in 1930s China in relation to extra-territoriality: particularly in China’s North-Eastern provinces which were the puppet-state of Manchukuo occupied by Japan. Histories of extra-territoriality and Japan usually end in 1899 so this coverage adds an interesting perspective. Here, Japan, for its own geo-political reasons, continued to recognise the existence of British and American extra-territoriality until 1941.

Despite the length of each volume, they all move at a cracking speed as Clark weaves the story around individuals and the court cases. The fast pace means that the reader never becomes bogged down in detail – an issue all too common with other books on the subject. It does, however, lead to one criticism: in order to give an aura of excitement and interest to the subject, Clark has a fancy for the dramatic subject title (such as ‘The Japanese Empire Strikes Back’). Further, he neither allows a good or amusing, well-known and oft-repeated, story to be side-tracked by an examination of its detailed accuracy nor does he re-examine the traditionally viewed short-comings of the system in order to assess their validity: he takes them at face value rather than questioning them.

That said, the volumes will be of interest to the general reader interested in the Japan and Shanghai of the time – particularly expatriate life. As for the more academic historian, the sketches and photographs that Clark has collected and the personality insights that he gives add considerably to the corpus of knowledge of the system – even though the Japan Society’s Biographical Portraits series has, in recent years, covered the Japan experience of a number of the individuals.

The volumes remind us yet again that, while the life of British and American communities in Treaty Port Japan and China is already fairly well-covered in the literature and commentary on extra-territoriality has increased recently, there is nothing published (in the English language at least) on the, admittedly smaller, communities of other nations, or the workings of their extra-territorial systems, in Japan and China.