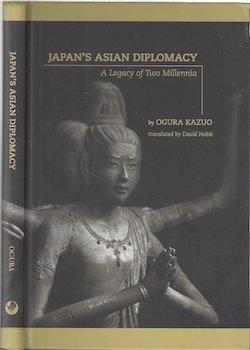 Ogura Kazuo, who is a graduate of both Tokyo and Cambridge universities, served as Japanese ambassador to Vietnam, Korea and France before becoming president of the Japan Foundation. He currently holds professorial appointments at universities in Japan.

In this masterly survey Ambassador Ogura looks at Japan’s relations with China and Korea since the earliest recorded times. He notes that previous studies have concentrated on the aggressive ideology of the Greater East Asian Co-Prosperity Sphere and ‘Pan-Asianism’ as an ideology of resistance to Western colonialism, an idea he problematises in this work. He suggests that ‘our perspective should address the question of how the nation of Japan perceives itself.’

In his opening chapter on ‘The Ethos of Japan’s Asian Diplomacy’ he draws attention to the concept of ‘Japan as the “divine land”’ and discusses Nichiren’s famous Rissho ankoku ron (A Treatise on Pacifying the State by Establishing Orthodoxy, 1260) as contributing to the creation of the divine land ideology. He argues that insufficient attention has hitherto been given to the importance of Japan’s internal politics and domestic power struggles in relation to the development of Japanese foreign policy in Asia.

Part I is entitled the ‘Fundamentals of Japan’s Asian diplomacy’. In this Ogura stresses the role and influence of ‘shared values’ in the formulation of policy, both in the early Japanese relationship with China and in the modern era in response to modernization, colonialism and in the postwar period to democracy and human rights. He describes Japan’s response to the ‘Yellow Peril’ jibes, concluding that in the Anglo-Japanese alliance ‘by making itself an ally of a “white” nation Japan strove to leave Asia and the “yellow race” behind.’ The rejection of Japan’s proposal for racial equality to the League of Nations followed by the condemnation by the League of Japan’s invasion of Manchuria can, he thinks, be seen as contributing to ‘Japan’s strategy of aggression in Asia’. He considers it ‘a mistake to interpret Pan-Asianism simply as a variety of anti-Westernism’.

Ogura is sharply critical of the way Japan often handled relations with China. In presenting the infamous Twenty-One Demands in 1915, the Japanese ‘overbearing attitude’ was ‘threatening’ and ‘involved repeated verbal insults to the Chinese’.

In Chapter Two, entitled ‘The interaction of Domestic and Foreign Policy’, he discusses ‘the diplomacy of apology as recognition diplomacy’. He concludes that ‘If Japan wishes to be fully recognized by the other countries of Asia as an unquestioned economic leader and an established democracy, it must first of all clearly acknowledge the fact that in the past it trampled upon both democracy and liberty in Asia, and does indeed feel remorse for these actions’. He then lists the apologies made in recent years by Japanese leaders.

Ogura draws attention to the influence that ‘considerations of honor and “face”’ have in Asian diplomacy. His paragraphs on ‘initiation of diplomatic contact – who invites whom’, ‘mutuality and equality’, ‘maintaining prestige’, and ‘Diplomatic face in the contemporary world’ – should be read by all diplomats dealing with Asian affairs, but they should also bear in mind that these considerations apply to other areas as well.

Part II is entitled ‘Foreign Relations of Japan, China, and Korea in Historical Perspective’. Chapter Three on ‘The History of Seikanron Thought’ provides a valuable and succinct survey of Japan’s relations with Korea from the earliest times to the annexation. In this he discusses the second Anglo-Japanese alliance and its role in relation to Korea. He asserts that ‘the establishment of Japanese interests in Korea was founded upon a deal involving Japanese support for British rule in India – a strategic balance of interests’. ‘Japan’s aggressive foreign policy towards Korea was accepted by the Western powers, and Japan’s Asian diplomacy was in fact a diplomacy oriented toward the Western nations – Asia was reduced to little more than its instrument.’

Chapter Four is entitled ‘Two Millennia of Sino-Japanese History: Five Wars and their Antecedents’. In this chapter Ogura reminds his readers of the complex history of Japanese contacts with China and the five wars that Japan and China have fought over the last two thousand years. He notes that all these wars began with struggles for influence over the Korean peninsula and were closely connected with domestic politics in both Japan and China. Sino-Japanese relations have ‘been deeply affected by both nations’ relations with Europe, Russia and the United States’. He suggests that ‘imbedding Sino-Japanese relations within a framework of international cooperation can minimize friction between the two countries, but also conversely, alienate them from one another’.

This book is a valuable contribution to our understanding of Asian relationships which if mishandled could lead once more to conflicts which could shatter world peace.