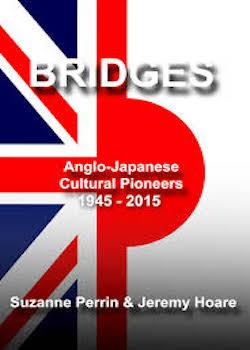 This handy book comprises dialogues with ten distinguished personalities in the UK-Japan world who have made considerable contributions to the understanding of Japan in the UK. Each one is a fascinating individual with an incredible backstory. The names are all familiar; I have enjoyed, mesmerised, Hirota Joji’s drumming not just at Japan Matsuri in Trafalgar Square but also and unexpectedly at a production of Antigone at the National Theatre in 2012, and have admired Kato Setsuo’s photographs on display in numerous exhibitions. I have been enriched listening to talks by Sir Hugh Cortazzi and Professor Ian Nish and have been impressed by Phillida Purvis’s work with her NGO Links Japan. Despite this familiarity I was previously oblivious to huge portions of these valuable figure’s fascinating histories.

At one end of the book are interviews with Sir Hugh Cortazzi and Professor Ian Nish, both of whom served in the armed forces during the Second World War and whose initial encounters with Japan were inevitably shaped by this experience. Cortazzi maintains that he is neither ‘pro-Japanese nor anti-Japanese’ but cognisant of Japan as a key agent in the global community and aware of ‘its good and bad points’. At the other end of the book we have Keiko Holmes who has tirelessly and impressively crusaded to promote reconciliation between PoWs held by Japan and the Japanese.

As well as individuals, the book highlights the importance of organisations in developing the Anglo-Japanese relationship; in particular, the Daiwa Anglo-Japanese Foundation makes frequent appearances. Indeed, the Foundation played a key role in precipitating Bridges. The exhibition which Phillida Purvis – Deputy Director of the Foundation from 1993 to 1998 – curated in 1997, also called Bridges, was held at the Daiwa Anglo-Japanese Foundation, and Professor Nish’s book, The Japanese in War and Peace: 1942-1948 was launched at the Daiwa Anglo-Japanese Foundation in May 2011. The book launch, held not long after the 2011 earthquake and tsunami which devastated northeast Japan, attracted a large gathering of attendees and served to remind the audience of the embarrassment of riches in the UK-Japan world. A small group decided to create a book of interviews with ten exceptional people and to dedicate it to the memory of Professor Geoffrey Bownas, a much-loved and distinguished Japanese linguist and scholar, and a pioneering Japanologist in the UK, who died in February 2011.

The diplomats, scholars, artists, humanitarians and grassroots campaigners highlighted in Bridges all impress for both the ambition and modesty at the heart of their work. The interviews are frank and often pack a punch. Kato Setsuo and Keiko Holmes’s references to racist comments towards the Japanese as late as the 1990s are indicative of more hostile times. What is also apparent is the serendipitous nature of the ways in which these figures became involved in the UK-Japan relationship. ‘They chose me. I didn’t choose them,’ says Professor Nish about his encounter with Japan. In 1945 he was in the army in India and was recruited for a Japanese language course. He was just 18 when he joined the school in Simla for 18 months. He graduated in July 1946 and went to Singapore where he worked in the Southeast Asia Translation and Interrogation Centre. Within two months he was based in Japan.

When talking about Professor Geoffrey Bownas’s involvement in Japan, his widow, Wiesia Cook uses a lovely phrase, ‘Slices of luck which made a wonderful cake’. One slice of luck (for the UK-Japan world) was that Bownas ended up breaking Japanese codes at Bletchley Park. His next encounter with Japan was also accidental. While studying Classics at Oxford he was given a grant to go to China, but was unable to visit due to the Chinese Revolution. Oxford decided to send him to Kyoto instead to study with China expert Professor Kaizuka Shigeki.

Garden designer and co-founder of the Japanese Garden Society, Robert Ketchell was travelling overland to India in 1980 to discover the path of Buddhism. He stopped in Japan en route and fell in love with the country. Changing his plans he ended up spending 3 and a half years in Japan, initially teaching English and then studying landscape architecture at Kyoto University. Concert pianist Kobayashi Junko and musician Hirota Joji both make similar observations – they hadn’t planned to stay in the UK, but are very happy that they did.

Despite the fact that the interviewees are all old hands, their thoughts remain rooted in the present. The book was produced pre-Brexit, but Sir Hugh Cortazzi in particular gave his thoughts, shortly after the referendum was called, on what would happen should the UK leave the EU. He says, presciently, that the UK is important to Japan as long as it’s in the EU and UK universities maintain their standing. And looking at things from the other perspective, he says that the UK will retain a good relationship as long as Japan resists isolationism and ultra-nationalistic sentiment.

The individuals covered in this book have all left, or continue to leave, considerable legacies. Just to highlight a few, Professor Bownas returned to Oxford from Kyoto in 1954 and was appointed lecturer in Chinese and Japanese. He established Oxford’s first full honours degree in Japanese in 1963 after which he moved to Sheffield in 1965 where he became first director of its Centre of Japanese Studies. Bownas tirelessly lobbied the British and Japanese governments to support the strengthening of Japanese Studies at universities in the UK. His efforts were richly rewarded when Prime Minister Heath invited him to Number 10 Downing Street in 1973 and presented him with a cheque for one million dollars from Prime Minister Tanaka.

Robert Ketchell’s idea of setting up a Japanese Garden Society to promote understanding of the Japanese garden tradition came to fruition in 1993, and has been a thriving organisation ever since. Among Ketchell’s aims was to re-establish past historical Japanese gardens in the UK and one of his many achievements has been the creation of a kare sansui (rock garden) at Norwich Cathedral.

In the 1970s, Keiko Holmes and her British husband, Paul, came across a memorial stone for 16 British army soldiers in Iruka, now called Kiwa-cho, in her home prefecture of Mie. The 16 had died while working as prisoners at a copper mine. Keiko discovered that of the 1,000 Prisoners of War captured in Singapore and sent to the Thai/Burma railway, 300 were sent on to Iruka on completion of the railway. Captivated by this story and realising that the British PoWs felt nothing but animosity for Japan, Holmes persisted at working towards reconciliation. Her story and drive are humbling. Since 1992 some 500 PoWs from Britain and elsewhere have been on pilgrimages to Japan organised by Holme’s charity, Agape World.

While I enjoyed delving into the lives of these pioneering personages of the UK-Japan world, I would also encourage others to complement this adventure by referring to the Japan Society’s My Britain, My Japan series on its website (while containing some of the same figures as Bridges, such as Phillida Purvis and Setsuo Kato, it also contains valuable newcomers to the scene such as Rebecca Salter, Sioned Huws and Haroon Mirza) and to Japan Experiences – Fifty Years, One Hundred Views: Post-War Japan Through British Eyes available on the Japan Society eLibrary. Another priceless initiative is the Wasurenagusa project, a series of filmed interviews with a series of Japanese individuals living in the UK. Again, there are overlaps with Bridges in the form of Kato Setsuo and Hirota Joji.

There are a few spelling mistakes in Bridges, some sections which need further editing and the occasional timeline error. I also wondered whether some readers would benefit from a brief explanation of important organisations which feature such as the Sainsbury Institute for the Study of Japanese Arts and Cultures (SISJAC) or of key people referred to such as Carmen Blacker. Maybe this could be addressed in what I hope will be a future edition.