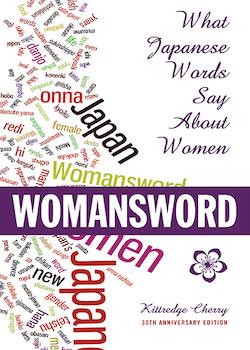 Three decades after its original publication, Womansword: What Japanese Words Say about Women remains a rare resource for Japanese learners and those who wish better to understand how the Japanese language expresses womanhood. Kittredge Cherry, who describes arriving in Narita in 1982, ‘a young American woman eager to conquer Japanese language and Japanese sexism, not necessarily in that order’, spent five years speaking to Japanese women, collating and interpreting Japanese words and arranging them in categories such as female identity, motherhood and sexuality. The result was Womansword, a collection of definitions and short essays and above all a distillation of cross-cultural conversations about being a woman.

I had misgivings about the premise of a book in which a non-Japanese person claims to explain what Japanese words say about Japanese women, and by extension about my role as a non-Japanese reviewer of that book. Couldn’t both roles be done better by a Japanese woman with the native Japanese required fully to understand the words’ nuance and context, and the experience of being a woman in Japan, of using these words and having them used about her? Kittredge Cherry, it seems, had the same misgivings. In the preface to the original edition of her now classic published in 1987, she wrote that it was the enthusiasm of Japanese women themselves which pushed her to publish despite her main reservation: ‘Shouldn’t Japanese women, like all people, be speaking for themselves?’

Cherry’s reservations about speaking for Japanese women were assuaged, but the fact that she had them helped make what could easily have been a glib, outside perspective of Japanese exceptionality (what might now fall under the ‘weird Japan’ sub-genre of Japan-related media) into something more meaningful. Rather than speaking for, or over, Japanese women, Cherry’s work is the product of forging connections with and listening to Japanese women. It is easy to see why these women enjoyed speaking to Cherry, in some cases even helping her research both the original and its re-edition three decades later. Her sense of humour is clear, as is her kindness towards the language and culture she describes. She is careful, in most cases, not to import foreign value judgements in interpreting the Japanese words she presents, and the value of her work lies in its refusal to accept easy, dated stereotypes of Japanese women. The title itself is a welcome rejection of the popular western stereotype which sees Japanese women as submissive and weak: Cherry coined ‘womansword’ to denote both the strength of Japanese women, wielding swords since the seventeenth century and still now dominating naginata sword-play, as well as the words used about women.

The beauty of Womansword is that, whilst it focuses on Japanese language and women, it forces the English-speaking reader to remember the biases which exist in their own language, too. I was struck by the number of these Japanese words which have equivalent English terms or concepts. For the Japanese word ‘kizumono’ we might talk of ‘damaged goods’, and whilst Japanese women who don’t marry before the age of twenty-five might once have been called ‘Christmas cakes’, in English we share the metaphor to a certain extent: women being ‘left on the shelf’ like unwanted food, a fate eschewed by men. In the same way, we might not talk about the ‘daughters-in-a-box’ that Cherry describes, but we do speak of ‘trophy wives’, similarly imagined as objects for presentation and preservation by men; although we don’t usually label our mothers dinosaurs or ‘mamagon’, we do have a word for the female fiancé when she crosses our threshold of acceptable female assertiveness: ‘bridezilla’. The fact that Cherry was able to explain these terms in English is in itself testament that many of these concepts are shared, used in both languages.

Reading this latest re-edition of Cherry’s classic, it is difficult not to feel frustrated that there is no guarantee that the collected words and concepts continue to be current in 2017. The new preface, which introduces contemporary Japanese ‘woman’s words’ such as ‘sci-girl’ and ‘womenomics’, as well as describing the social and linguistic changes which have taken place between publication of the original and its thirtieth edition, has the almost inevitable corollary of highlighting how outdated some of the original words and concepts are, decades later. Cherry provided readers with a snapshot of how Japanese language reflects attitudes towards womanhood, but it is important to remember that some Japanese women at the time and Japanese women in the future are excluded from this frame.