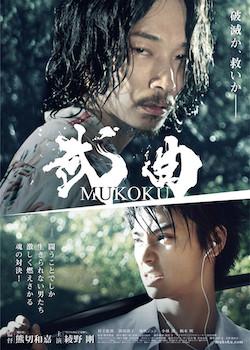 Some ten years ago now, Alexander Jacoby pegged the film director Kumakiri Kazuyoshi, “it seems likely that Kumakiri will continue to probe the darker corners of society and experience.” He has indeed continued in that vein, often through adaptations of recent Japanese novels. The latest is Mukoku, which appeared at this year’s Raindance Festival in London.

The title, 武曲, appears to be a neologism: ‘martial+curve’; but Kumakiri is faithfully following the title of the novel of Fujisawa Shu. This active novelist has been the original author of a number of prominent samurai films of the recent past, including Love and Honour, Hidden Blade and Twilight Samurai. Mukoku, however, is a story set in some sort of present day amongst devotees of the kendo martial art of swords, generally wooden or bamboo. A Zen Buddhist master supervises kendo practice for high-schoolers in his dojo. There resides, or should reside, the place of stillness of Zen. But this film might well have been called ‘rage’ or ‘anger’, if that title hadn’t been used recently elsewhere in Japanese film.

The film starts with a mêlée of jump-cuts depicting a very angry man in his thirties who is seen to be repeatedly drunk and who, in stuttering flash-backs is shown to suffer an abusively obsessive father, also a kendo addict who exposes his very young son to a steel blade and beatings. Seeing this thirty-something portrayed as a young boy and a young teenager by different actors in flash-backs, I confess I initially assumed that a very angry senior high-schooler, drop-out from kendo, was just another manifestation of this storm of fury. But our kendo master sends one on a fool’s errand to meet the other, and I had to rewind my reading of the narrative. The high-schooler, when he is not getting into fights with his peers and seniors, is the rapping vocalist of a rock group with some local following. It felt as if this was a minor update of an old story of a poet, as, apart from this intrusion, there were absolutely no appearances of the twentieth century in the form of phones, cars or even trains. So I was surprised to see that Fujisawa’s novel came out as recently as 2012, although I wonder whether it was set rather further back in time than the film. The adaptation is credited to Takada Ryo who has also scripted two successful adaptations recently for the director Oh Mipo, Being Good and The Light Shines Only There.

In the ‘present time’ scenes, the protagonist’s father is in a vegetative state, having suffered an injury from his son’s sword, after the father had insisted on yet another abusive practice-round. A considerable volume of this film is made up of angry confrontations, and solo mad and drunk scenes, all captured with a hand-held camera, allowed often to noticeably float. Perhaps it’s a plot giveaway, but I can report that the cameraman, Kondo Ryuto, survived the photography, despite being centimetres from a manifestly sharp blade slicing through partition walls. The wielder of the blade, and the actor with the most screen time, is Ayano Go. But the actor tasked with grounding the fury as the kendo master is Emoto Akira, in his best role since at least 0.5mm.

Women in this story are peripheral and very scantily drawn, in strong contrast with other adaptations of Takada Ryo. One such peripheral woman only appears in a graveyard scene, where she accuses the protagonist as being a father-killer. I took the scene to be a dream, but it was, however, specifically set in Kita-Kamakura. I’m certain that they didn’t shoot this scene at the actual graveyard of Ozu and Kinoshita in Kita-Kamakura, but what we are to make of it, I’m not sure.

The major problem for me, however, was the way the story had ‘sensei’ finally bring calmness to the protagonist. If you read this paragraph then the story, such as it is, will all be revealed. I think Kumakiri does want the final revelation to be read as a resolution, since he pulls out another item from his tool-lit – the final, stably-mounted camera. Finally, the father dies and only then, does our sensei produce a confession of the father saying (I paraphrase) that no son, I wasn’t trying to kill you, even if it looked like it. I’m trying to get you to kill me.

We are supposed to accept that sensei kept this letter secret whilst father first attempted and achieved the ultimate cruelty, and then kept it secret for years more whilst the son tortured himself.