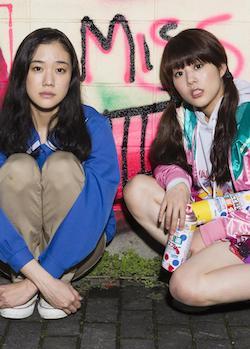 For the 2018 Touring Film Programme, The Japan Foundation put together a variety of contemporary Japanese films under the audacious and promising theme of (Un)true Colours: Secrets and Lies in Japanese Cinema. Through this selection, viewers can discover elements of the hidden face of Japanese culture alongside some new and unique Japanese movies. The film Japanese Girls Never Die (Azumi Haruko wa yukue fumei, A.K.A Azumi Haruko is Missing, 2016) by Matsui Daigo was undoubtedly one of them.

As the original title indicates, the film focuses on the disappearance of Azumi Haruko (Aoi Yu), a 27 years old woman who lives in a suburban city and shares her house with her mother, father and grand-mother. She works as an office lady in a small company where she has to confront the misogynistic behaviour of her two older male colleagues every day. As we follow the young woman in her daily life we observe how the people she meets throughout the film constantly bombard her with comments regarding her life and constantly stress the importance that she get married as soon as possible in order to escape the mundane life she leads. Seeking to escape such a dull existence, she attempts to date her neighbour and childhood friend Soga (Ishizaki Huey), but with no success as the young man proves himself unable to fulfil Haruko’s expectations.

The young woman’s story slowly rejoins the one of Aina (Takahata Mitsuki), who, like Haruko, suffers from the crushing monotony of life. Bubbly and energetic she is desperate for love and adventure and thinks she has found the answer in Yukio (Taiga), a former classmate who it seems is only interested in fun and one nights stands. As a present for his birthday, Aina offers Yukio a DVD about Banksy which is how we segue into the film’s second plot thread: Yukio and yet another classmate, Manabu (Hayama Shono), tagging the town with Haruko’s missing poster as a stencil. As this plays out, the radio plays in the background, warning men about the danger caused by a high school girl’s gang beating men up at night.

Matsui Daigo has chosen female protagonists yet again as he did in his previous film Our Huff and Puff Journey (Watashitachi no haa haa, 2015), which followed a group of high school girls on a road trip. With this latest film, adapted from the novel of Mariko Yamauchi, Matsui initiates his critical thinking concerning Japan. Through the gaze of his observational camera, he profiles a society deeply rooted in patriarchy in which women struggle to find their place.

Japanese Girls Never Die’s non-chronological narrative can appear misleading at times, but the strength of the film resides in the dramatic irony that the viewer knows since the beginning that Haruko is going to disappear. This constantly prompts the audience to question the circumstances regarding her vanishing. Subsequently, this creates a tension that keeps the viewer engaged and on the lookout for any details to connect the three plots of an increasingly complex story. While we think we already know the outcome of the film, Matsui constantly challenges and surprises us, achieving an unexpected ending supported by a subtle and precise scenario, validating the talent of the young director.

The real strength of the film lays in the contrast the director creates between two worlds: the female and the male. This is reflected in the discrepancy between the fantasies the female protagonists have been conditioned to long for and the reality they live. In turn, the male characters are depicted as shallow, unfaithful or absent thorough. Through their dialogues we learn that they are solely attracted by youth, beauty and artifice. With cynicism, the director fulfils their wishes by giving them the high school girls they desire, but they are ready to beat them. At first sight, they look like any other high school club you see constantly cropping up in popular Japanese culture, but Matsui chooses the show them as a new symbol, one of a generation aware of the gender struggle and seeking vengeance. What follows in their wake are fight scenes of pure violence, the images on screen contrasting with the naive laughter of the school girls. This manga inspired group of girls don’t advocate gender equality, they literally fight for their right to exist at all. While Haruko, who does not belong to this generation of women, find herself fighting a lone battle and seems to have no choice but to disappear.

The leading actress, Aoi Yu, (who also appears in another Japan Foundation Film Touring Programme film, Birds Without Names by Shiraishi Kazuya), carries the role of Haruko with a sense of strength and accuracy thorough the film. She creates a character whose strength and truth allows the film to avoid stereotypes and enhance the narrative twist and turns, her passivity concealing something hidden thorough. By following Haruko’s story, we witness the heinous commentaries of obnoxious men which bring the film on the verge of surrealism sometimes, like in the scene when her colleagues tell her that unmarried women eggs’s get rotten and when we have to painfully watch Haruko silently facing the commentary.

The contrast between women and men reaches its climax when Yukio and Manabu are propelled into the local art scene as their tags attract such attention that they are even able to open their very own ‘Dream Land’ – a park decorated with their graffiti tags. Through vandalism and without seeking it, the duo is rewarded with fame. By comparison, Haruko’s efforts are rewarded only with her colleague’s sexist and vile comments. Her face is remembered not as that of a disappeared woman but as a piece of art crafted by men.

In the end, the film tells the story of women who cannot find their place in Japanese society regardless of their efforts to fit in. Haruko tried to wear skirts at work, seeking to be more youthful as her male colleague advices her and attempts to conform to the stereotypes of love and marriage, only for her partner to reveal himself as unfaithful. Aina hides her extravagant personality under fake lashes, fake nails, oversized pink accessories to emphasise her femininity and hopefully attract her prince charming, but she ends up with a deceitful yankee who shamelessly trade her to his friend.

Japanese Girls Never Die shows us two worlds, unable to communicate with one another and to fulfil the unrealistic and outdated expectations set of the society where the gender roles are shown as hugely unbalanced. Thus, the film fits perfectly the theme of (Un)true Colours, as this depiction of the Japanese society is scarcely shown on the big screen. With his innovative message, Matsui reveals himself as a promising young director who understands the struggle of his and subsequent generations. He conveys a message of hope through his depiction of youth, one full of energy and the will to see things change. Japanese girls, indeed, never die, and with the dim prospects of Japan’s plummeting birth rate in mind, the film offers a strong message that responds to the inability of men by allowing women the opportunity to forge their own way forward, amongst themselves, and offering to the audience a refreshing and well needed dose of girl power.