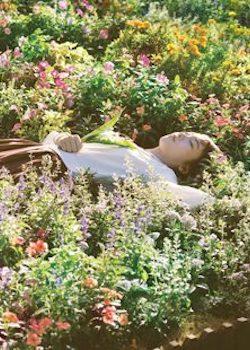 The Dark Maidens (Ankokujoshi 2017) by Yakumo Seiji was selected and screened as part of the selection of the 2018 Japan Foundation Touring Film Programme which gathered a wide selection of contemporary films under the theme of (Un)true Colours: Secrets and Lies in Japanese Cinema. Within this programme, stories of murder, disappearance and social critique were recurring motifs. The Dark Maidens is certainly the film which broached these topics in the most unusual and unexpected way.

The film’s story is set in the prestigious all-girls Virgin Mary Christian academy where we find our central characters; the members of the literary club chaired by the principal’s daughter Shiraishi Itsumi (Iitoyo Marie). Itsumi is admired and envied by everyone, something which becomes apparent when she is tragically found dead in the academy’s flower garden following a supposedly lethal fall from a rooftop. While the school girls ponder the circumstances surrounding Itsumi’s death (was it an accident, murder suicide?), her literary club develop their own theories which inspire their writings. As the group meets one final time for the semester, each member is allowed to share their stories and disclose their thoughts about the culprit. Through each reading, a different member of the club is accused, highlighting a dark truth to this supposedly pure and pristine academy.

The plot of the film resembles any good detective story. There are plenty of twist and turns, possible outcomes and a lingering air of suspense. This ambience manifest through dark humour as each of the girl’s scenarios illustrates loyalty and hatred always romanticising the events to the extreme. Indeed, much credit must go to screenwriter Okada Mari who wrote scripts for manga and anime for the best part of her career before starting to write live action films recently, and whose distinct style clearly permeates the film and shine through in this adaptation of Akiyoshi Rikako’s novel. Okada gathered elements familiar to the ‘shojo’ (manga for teenage girls) and applied them to this study of life and relations inside the privileged group of the literary circle.

The magnificent boudoir where the girls meet for their meetings around tea and mouth-watering cakes would be any young girls dream, and yet, everything appears too shiny, too dramatic and overall artificial. This leads the spectator to question the authenticity of each story, which seem to embody unique genre to deepen their artificiality. From tragedy to horror, to melodrama, to romance, the film’s aesthetic diversity distinguishes it and sets it apart from the common multiplex blockbuster, creating an enjoyable mystery as it keeps the viewer entertained thorough, eager to discover what comes next.

The strength of the film’s segments dwell in the details. The intertextual references play a key role in signposting the viewer’s journey from a story to another. Take for instance the use of Amadeus: the novel, musical talent of Mozart and the implications of it are considered and pondered across three of the girls’ stories, each taking a different meaning throughout. The zenith of the device however is the Lily of the Valley: the flower held by Itsumi at the moment of her death. Each girl’s story features the flower in one form or another, each interpreting it as a clue toward the true killer. The symbolic quality of the flower enhances the causal effect within the film. The ‘Rashomon Effect’ (named after Kurosawa Akira’s masterpiece) created by the film’s unreliable narrators, shifts out our attention onto the way the stories are told rather than looking for the truth.

Itsumi’s death is not reflected as something harsh or crushing. Rather she is championed in death. In turn this romanticism is juxtaposed with harsh truths which the engaged viewer will surely realise and uncover before the film reveals them. These truths unveil a pessimistic picture of the unforgiving world of girlhood. The perfect universe of the academy is gradually eroded by the progressing narrative being told and is extinguished by the film’s climax.

As mentioned previously, the film invokes the shojo (girlish) style through Okada’s screenplay. However it would be remiss not to mention director Yakumo Seiji’s input on the project. His direction enhances the use of the mystery and shojo conventions to give them great depth and quality , shaping character (and audience) expectations via fantasy, only to put in process the erosion of surface and artifice , revealing the characters’ true intentions in surprising and challenging ways. This is reflexive of the surrealist setting that shapes the expectation and fantasies of many young girls in Japan (and abroad) and serves as a warning that such perfection is scarcely what it seems.

The Dark Maidens seems like a nice distraction on the face of things with few substance. However, the film shows itself to be an intelligent mediation self-aware in its execution. The discrepancy between aesthetics and genre constantly ask us to ponder the nature of the film, testing the audience to engage in different ways throughout. What at first appears to be a basic mystery targeting a teenager audience turns into the heart of darkness, raising topics like prostitution, peer-pressure, manipulation, crime and suicide. By showing us the real faces of the protagonists, the film reminds us that these young girls are not as innocent as they look. Realism is a form that many films strive towards, but The Dark Maidens does the opposite. Instead it embraces hyper-realistic inspiration of murder mysteries and manga and applied them fully, all the while still dealing with topics in a derisory and exaggerate way which turn the film into an entertaining oddity that will surely leave you with between laughs and chills.