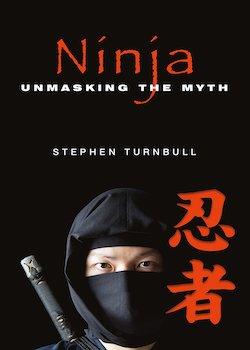 Stephen Turnbull’s recent factual work Ninja: Unmasking the Myth acts as an entertaining, yet informative, book that provides both ninja enthusiasts and novices with a clear and thought-provoking introduction to the elusive history of the now ubiquitous image of the ninja, or shinobi. Although the picture of the shuriken (ninja star) wielding masked figure is widely associated with Japan, few know of the truth that lies behind this well-constructed historical figure: however, in this book, Turnball exposes the myths and sets the record straight.

In the quest to discover the truth behind the black-cladded warrior, Turnball takes the reader on a journey through Japanese history in a concise and neatly written piece of work. The book includes an in-depth analysis of early Japanese texts, with a focus on language, and takes a critical lens to examine battle reports from Japan’s infamous Sengoku period. Turnball also casts his gaze to the contemporary world and the future of the ninja myth. He eloquently explores the impact of the influential early 20th century Ninja manuals, alongside manga and feature length films, illuminating their instrumentalism in constructing the current image of the covert, highly skilled and agile warrior that exists today. In this exciting and factual work, readers will fine great enjoyment in Turnball’s down to earth writing style and unparalleled knowledge of the mysterious ninja, which Japanophiles around the world have come to adore.

With the term ‘ninja’ only appearing in the Japanese dictionary in 1974, it’s truly fascinating to think that the unknown espionage warrior manged to become a ubiquitous cultural phenomenon so rapidly. Anime, manga and video games are rife with ninja characters, who wear masked outfits and wield sharp short swords. But popular media images of the legendary warrior, such as that in Naruto or Mortal Kombat, often mystify the truth behind the fascinating historical figure. With help from Mie University researchers, and a deep-pool of historical and cultural knowledge, Turnball picks apart the myths surrounding the ninja and ninjutsu and cornicles it’s rise in the Japanese cultural consciousness. In the book’s concise 15 chapters, readers will be sure to see the facts behind the ninja myth trump their fictious representation.

Ninja: Unmasking the Myth starts off with a chapter that highlights the discontinuity in the ninja tradition, neatly framing the book’s key focus. Turnball critically assesses the language and kanji characters that were used in some of the early texts that allude to the famed ninja warrior. By highlighting the plethora of interpretations of the word ‘ninja’ it is clear to see that a precise understanding of the warrior’s origins may be impossible to achieve. For example, discrepancies in the interpretation of the meaning of ‘nin’ exist, with some schools of thought believing this alludes to the warrior’s secrecy and invisibility, traits which characterise modern interpretations of the ninja. But others believe ‘nin’ refers to endurance and patience, such as mastery of martial arts.

The writer also introduces readers to the word ‘shinobi’, which adds further linguistic ambiguity. ‘Shinobi’ has historically been used simultaneously as a noun to describe the black-clad assassin, but and also as verb to express sneaky and secretive behaviour carried about by anyone indiscriminately. This duel meaning, as Turnball displays using a historical battle account from 1338, results in misinterpretations and confusions, and has led to certain historical events being associated with ninja, when in reality they my have no bearing to the true history of the ninja warrior. This chapter’s focus on Japanese characters means it will be of particular interest to those studying Japanese language, however, to a layman like myself, it is still easy to comprehend and remains enlightening.

Chapter 2 delves further into the warrior unit’s origins. Turnball points use towards the profound and lasting Chinese war manual Sun Zi and the Art of war as a possible building block in the foundation of the ninja as a key actor in feudal Japan used for espionage and infiltration purposes. This is a particularly interesting interpretation as the Ninja is often presented as a uniquely Japanese icon, yet ironically, it’s true origins may in fact lie in China! Chapters 3 through to 6 focus on the geographical location of the ninja: Koka and Iga. These two provinces lie East of the Kyoto-Osaka-Kobe metropolitan area and, as Turnball explains, have become the home of the ninja myth. Thousands of Japanese and international tourists flock to Koka each year to experience life in the ninja village. Iga city is also a  popular tourist hotspot, boasting an impressive Edo period castle and as well as being the birth place of the widely known samurai/ninja figure Hattori Hanzo. Turnball illuminates these chapters with fascinating historical accounts of battles and family feuds, with Koka and Iga acting as the back drop of these Game Of Throne esc. stories. Tales of castle infiltrations and ninjas dressing up as monks fill these entertaining chapters. The account of the Rokkaku samurai clan vs the Nobonaga family in the 16th century is a personal favourite and highlights the exciting, yet gruesome, world of the ninja in pre-Tokugawa Japan.

From Turnball’s writing and analysis, a truthful picture of the ninja begins to form. Rather than a magical, elusive, mask-clad assassin, the more accurate image of a tactile and cunning espionage solider begins to emerge from Turnball’s accounts. Through Turnball’s analysis of historical sources, the mystical and fantasy becomes grounded, and the pragmatic and well-trained shinobi of civil-war Japan takes its place: one that preferred rope ladders and civilian clothing too ninja stars and masked outfits.

Turnball moves away from the geographical focus on the ninja and looks at their presence in Tokugawa Japan. Chapter 7, entitled ‘The Shogun’s Shinobi’, assesses the role the ninja warrior occupied during the peaceful rule of the Tokugawa bakufu .Turnball concludes that they acted more as detectives, using low-level espionage to ensure both samurai and peasants followed the rigid rules of the shogunate. Shinobi men are even of said to of infiltrated and investigated Commodore Perry’s black ships upon their infamous arrival in Yokohama! What Turnball displays is that the ninja did factually exist and were utilised in Tokugawa Japan, however their deeds are less heroic, and action packed as their 21st century image presents them as. The ninja’s cloaked mask and ninja shuriken seem to of been traded in for a detective cap and evidence bag.

Chapters 8 to 10 shift their focus to the analysis of ‘ninjutsu’: the rules and warrior code behind the role of the ninja. By focusing on the ninja manuals of 20th century, Turnball attempts to show how the legendary ninja figure began to move from the realms of reality into retrospective mythical warrior with supernatural prowess. Books such as Mansenshukai, known as the so called ‘ninja bible’, emphasis the ninja’s need for secrecy and disguise while also illustrating the core Confucian principles behind the justice seeking warriors. Turnball’s keen analytical eye and use of primary sources truly makes for pleasant reading in these critical chapters. Photos of typical black, sword wielding ninjas, Edo period castles and old Ukiyo-e woodblock prints also breath life into the book and help provide visual context to many of the writer’s arguments.

From chapter 11 onwards, readers are treated to an over view the recent post-war history of the ninja and its highly marketable image. Turnball informs readers of the start of the ninja tourism and pulp magazines that serialised ninja activities and brought the ancient warrior into the homes of many Japanese people. Turnball also uses the James Bond film You Only Live Twice as case study, outlining one of the first and most influential exposures mainstream western audiences have had to the shinobi warrior. Due to the magic of Hollywood , the lasting image of ninja abseiling down walls and throwing shuriken, all in the presence of Sean Connery, is still the current image of the ninja which pervades the minds of Japanese enthusiasts to this very day.

Turnball concludes his fantastic book by casting his gaze to the future of the ninja image, and the future of the myth. With Tokyo 2020 Olympic Games fast approaching, the ninja is being reframed as a strong-willed athlete to help publicise the event. With the establishment of the Mie University ninja Department, a key contributor to the book itself, the ninja warrior is being researched with respect and the myths are being exposed. Turnball concludes that much of the current image we have of the ninja is roughly historically accurate, or at least developed from some genuine reality. However, we should not forget that the ninja of today is an entertainment figure and commercial commodity: the world is more concerned with making money from the warrior it is with representing him accurately.

Turnball’s excellent case study of the ninja myth takes readers on a whistle stop tour of Japanese history. With references to Japanese linguistics, art and modern popular culture, Ninja: Unmasking the Myth is truly an entertaining and fascinating work. Above all, Turnball breaths new life into the ninja and teaches us an important lesson: we should be critical and look deeper into the history of the things we blindly view as fact. Ninja: Unmasking the Myth really does, without a doubt, prove that the true history of the Ninja is just as interesting as the myths themselves.