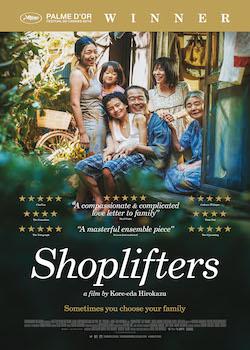 Kore-eda Hirokazu’s latest outstanding film Shoplifters (Manbiki no Kazoku, 2018), which earned him the Palme d’Or at Cannes Film Festival last May, confirms the unbelievable talent with which the director depicts the beauty and tenderness of the broken ways in which family unite functions with this heartwarming and devastating tale of love and thief. Kore-eda has already caught the attention of Japanese and international audiences for the past 25 years with deeply humanist films such as Still Walking (Aruitemo, Aruitemo, 2008) Like Father, Like Son (Soshite Chichi ni Naru, 2013) or Our Little Sister (Umimachi Diary, 2015) where he initiated the questioning of kinship and subverted the representation of modern family on screen. Nonetheless, with Shoplifters, Kore-eda perfected his dialogue and strengthened the approach of his perennial theme by showing the unusual and powerful story of the Shibata family.

Set in a non-touristic and quite unattractive outskirt of Tokyo, the film opens on the daily activities that bound Osamu (Lily Franky) and his pre-teen acolyte Shota (Jyo Kairi) together: petty thief. With a quick and secret gesture, Shota informs his father the way is clear before filling his backpack with instant noodles and other necessities. While the duo walks back home in the freezing night to share their feast with the rest of the Shibata’s, they come across a young girl, Juri (Sasaki Miyu) standing on her own on her door step. Osamu naturally takes her along, a decision that does not seem to please his wife Nobuyo (Ando Sakura) who cannot figure out how to realistically welcome another mouth to feed. With reason: the little house is crammed with her younger sister Aki (Matsuoka Mayu ) who contributes to the family as a sex worker in the local strip club and the grandmother Hatsue (the late legendary actress Kirin Kiki) whose small pension supports the entire family. After discovering some bruises and burns all over Juri’s body and hearing her parents violently arguing upon taking her back home, Osamu and Nobuyo take the decision to keep the little girl with them. As the couple attempts to convince themselves that they are saving Juri rather than kidnapping her, the family embarks on a tumultuous and touching adventure.

Kore-eda has often been compared to the emblematic Japanese director Ozu Yasujiro for their shared interest in exploring the topic of family on screen. Still, with this working-class drama Kore-eda evokes rather the cinema of Naruse Mikio or Ken Loach, a resemblance the director himself confirmed in an interview with the Guardian on the occasion of the release of Our Little Sister a few years ago. Yet, the strength of Shoplifters does not only lie on the representation of the social reality of lower classes in modern Japan. Kore-eda holds majestically together the carefully paced scenario before unfolding a painful truth as the story goes and finally reveals the genuine nature of a family for whom we developed a profound attachment. The cast of talented actors wonderfully supports the authenticity of the links uniting the Shibata’s together as the viewer finds himself blindly assuming the parentage of the protagonists, which emphasises the surprising and powerful outcome of the film where the tensions built up throughout finally achieve a climatic and deceiving end. Kore-eda’s mastery certainly dwells in his ability to represent his characters delicately oscillating between poor morale and genuine love for each other with in background the suffocating anxiety of not belonging to anyone or anywhere. The director seems indecisive, not able to choose whether the fragmented clan is either evil or simply too ingenuous for this world, which brings out the deeply humane aspect of the film.

This celebration of human nature is shown in a series of insightful scenes, dazzling in their simple ability to shake the audience to the core in a matter of seconds. It is the case in the sequence when Shota trains Juri (whose name is changed to Rin after joining the Shibata’s clan) to shoplifting and the little girl get caught. Surprisingly, the owner of the shop offers her a lolly rather than telling her off and advises Shota not to involve his little sister in his bad habits. In the same vein, in a tender and evocative scene Osamu and Nobuyo finally find themselves alone in the house and take the chance to have sex after what seems to be an eternity, revealing the genuine attachment that ties the two together. All in all, Shoplifters let us fathom the assumption that the lack of material means can be made up with sincere human connection and affection. Daily outburst of simple happiness such as a day at the beach, the meals eaten at the family’s diner table, the bath shared together make us root for the Shibata’s and make us hopeful that it will show them the way to redemption. But it is not the case. Kore-eda shows the Shibata’s as both endearing and deceitful, something that prevent his film from falling in unnecessary pathos and rather, turns it into a wise and subtle tale.

To conclude, with his latest film Kore-eda finds his own way to make a powerful and necessary social critic within a genuinely touching modern melodrama that owe him to integrate the legacy of emblematic filmmaker who decided to give a voice to the outcasts of the society. A well-deserved Palme d’Or and a film that we could not recommend to watch more.