Bridge to the Gods: Tales from Kyushu 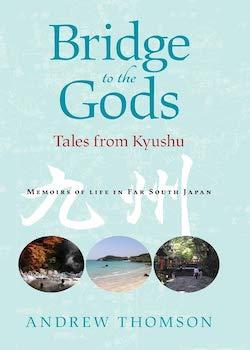 Whilst Kyushu isn’t exactly ‘neglected’ in terms of the overall coverage of Japan, it may be that for the casual visitor with only a general knowledge of the country it is more widely known for being the place where Europeans first set foot in Japan and the location of the city of Nagasaki with all of its none too happy associations in both the Japanese and Western mind; and for James Bond enthusiasts, Kyushu is also known as the location of You Only Live Twice’s villain’s base under Mount Shinmoe-dake volcano (an area unfortunately closed to the public since 2011 due to volcanic activity).

Southernmost of Japan’s larger islands Kyushu is somewhat distinct from the other regions which most casual visitors to Japan may have some familiarity with such as Honshu’s east central region of Kanto (around and including Greater Tokyo), and the south central region of Kansai (around and including the cities of Osaka and Kyoto). Japan’s largest island Honshu is joined to Kyushu across the Kanmon Straits by a train bridge, the Kanmon road bridge and tunnel, and the Sanyo Shinkansen tunnel. All of them connect Honshu’s Shimonoseki (famous for its place in Japanese history as the place where the Minamoto (Genji) finally defeated the Taira (Heike) at the battle of Dan-no-ura) with Kyushu’s fairly industrialised northern city of Kitakyushu, so when travelling there by car or train, the passage between Honshu and Kyushu is fairly unremarkable.

To the collection of published, and generally scholarly, books on Kyushu comes this welcome addition of Andrew Thomson’s non-academic 2018 memoir, Bridge to the Gods. Andrew, son of the Australian professional golfer Peter Thomson and former Australian Federal Government Minister, eventually settled in Kyushu where he set up his own consultancy business and began exploring. This book is a charming account of his personal contemporary life there and his explorations of Kyushu’s culture, cuisine, history and attractions.

For those unfamiliar with Japan and, in particular, Kyushu’s location, there are a few handy maps. A glossary of Japanese words has been placed unusually, in this case, at the beginning of the book which makes for much easier referencing rather than, as is general, hidden amongst the usual end of book reference and bibliographic pages of which, in this instance, there are surprisingly none.

The account begins, or perhaps ‘kicks off’ might be a more apt phrase, in Tokyo with Andrew’s experience of the 2011 Tohoku earthquake as it affected him and his colleagues in an office in the city. As the book progresses it unveils Kyushu in a way which is very accessible and charmingly personable. With his family connections there (his wife is from Kyushu), this account of Andrew’s wide ranging explorations on his Kawasaki 900cc Vulcan Classic motorbike opens up the island, its locations and its culture to the armchair visitor in a way that other more studious books do not.

It’s also nice to see photos mixed in with the text in contextually appropriate places helping to place the images in relation to the situation being discussed rather than concentrated collectively in one or two locations elsewhere in the book.

Each chapter is concise yet contains enough explanatory narrative to satisfy without going into so much academic detail to make it less accessible. Often Andrew relates what he has been told or has seen without comment, leaving the reader to ponder on meaning and interpretation which, when combined with Andrew’s personable style, makes for a thoroughly engaging read. The book is full of enough interesting places and curious characters to satisfy, not least of which are his characterful in-laws. Occasionally Andrew ponders a subject and then provides explanations which, based on personal conjecture, ignore the received wisdom of the Japanese. For instance, that sumo may have entered Japan from Mongolia via Kyushu rather than it having been initiated by Nomi no Sukune (an ancestor of the Heian politician Sugawara no Michizane) in 23BC after the defeat and killing of Taima no Kehaya in hand to hand combat at the behest of Emperor Suinin.

Perhaps one of the most interesting chapters, but the one with the most ominous feel, is that about the Yakuza which Kyushu apparently has more of than anywhere else in Japan. Andrew is very explicit, disabusing readers of any notion of the Yakuza being the Japanese equivalent of Robin Hood, about naming names and the criminal acts that they have carried out, and even going so far as to make a brief visit, driving past one of the three Kyushu Yakuza gang’s headquarters!

Compared to this and the ‘not-for-the-faint-hearted’ account of a bare handed wild boar hunt, most of the other chapters, whilst just as interesting, are less disquieting. Andrew’s explorations range across other varied topics such as outdoor baths or rotenburo, Japanese Christianity, the first tea and rice in Japan, horse meat cuisine, the kamikaze pilots, the search for the island where James Bond disguised himself as a Japanese fisherman and for the woman who played the character Kissy Suzuki in the James Bond film You Only Live Twice; the connection with Saigo Takamori, as well as Andrew’s involvement with the care of his increasingly ailing in-laws and preparations for the arrival of North Korean missiles, are also explored, all whilst navigating frustratingly obfuscating yet pleasantly polite conversations with the locals.

As each chapter doesn’t go into too much detail the book acts as more of an introduction to the many attractions that Kyushu has to offer, enough to dip your toe and whet your appetite. Andrew’s charming writing style is eminently accessible and makes for an addictive read. However, the book isn’t cheap and at around £30 for the paperback and around £40 for the hardback it is unlikely to be a spur-of-the-moment purchase. However, for those with an interest in or planning on exploring an area of Japan least visited by foreigners it is certainly a worthwhile investment.