Enigma of the Emperors: Sacred Subservience in Japanese History 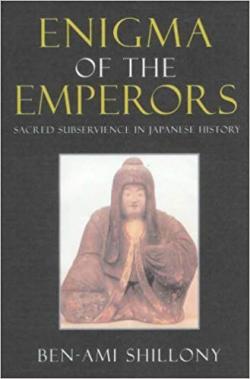 This well-researched and scholarly study by Professor Shillony of the Hebrew University of Jerusalem will interest not only students of Japanese history but also all those concerned for the future of the imperial institution in Japan.

The book, which evolved out of earlier research first published in Japanese under the title of Haha Naru Tenno, covers the political, cultural and religious background to the 'emperor' system in Japan from mythological times down to the present day. I have put the term 'emperor' in quotes as whatever else they were Japanese 'emperors' were never equivalent to emperors in China or Russia. Nor were they ever emperors in the Roman sense of the term 'imperator' or generalissimo.

Professor Shillony emphasises that, "The political weakness of the Japanese emperors was balanced by the extraordinary stability of their dynasty. The effete emperors occupied an unchallenged throne. An emperor could be deposed, exiled or even murdered, but his institution could never be abolished and his family could not be replaced (page 81)."

He concludes that the "strange survival" of the dynasty was due to the fact that Japanese emperors combined sanctity with passivity to such an extent that they were too subservient to rule, but too sacred to be deposed (page 273)." These conclusions are based on his study of how the emperors behaved over the centuries.

The author has much to say about the divinity of the emperors. He points out that in Japan the 'kami,' which is generally translated as god, were transcendental beings. The term could be applied to any dead person, object or natural phenomenon. He notes the differences between the divinity ascribed to Japanese emperors to that ascribed to the pharaohs in ancient Egypt and notes the stress laid in Europe on the 'divine right of kings' resulting from their claim to be God's representative on earth carrying out His orders. The emperor in Japan was not the representative of the kami but "an intermediary between the people and the gods." He was venerated but not worshipped. However his body was regarded as "sacred and neither knives nor scissors could be applied to it." This seems to have been one of the causes of the high rate of infant mortality in the imperial family down to the twentieth century.

Shillony discusses in detail the occasions on which women were ruling empresses. There seem to have been shaman queens in early times but the first person to hold the title of tenno was the empress Suiko in 593. Between that time and 770 six women were titular empresses, but the last of these, Koken-Shotoku, was a controversial figure and there no titular empresses until the Tokugawa era. One reason for this was the influence of Confucian attitudes adopted by the Japanese; these gave precedence to men and led to male chauvinism which is still a strong element in Japanese culture.

We tend to think that Japanese emperors since the end of the sixth century have always been called tenno but as Shillony points out various different terms have been used over the ages. The old Japanese title was sumera mikoto. According to the Yoro code of 718 tenno was to be used in imperial rescripts, tenshi in ceremonies, kotei in correspondence with 'barbarians' and heika in addressing the emperor. At the beginning of the Meiji era the term mikado was in general use when the English title of emperor was adopted to give the Meiji emperor an equivalent status to that of the sovereigns of China, Russia, Germany, France (at the time of Napoleon III) and Britain (Queen Victoria had been proclaimed Empress of India).

Shillony points out that the continuation of the imperial dynasty depended on the birth of sufficient sons in the family. "To avert biological extinction, the emperors had to have access to many noble and fertile women (page 57)." Even so sometimes the succession was remote, although the ancestral chain was never apparently broken.

The Meiji Emperor had fifteen children by various concubines but only five survived. The Showa Emperor was not prepared to follow his grandfather's example and the practice thus ended in the twentieth century. After the Second World War the collateral branches of the imperial family, which could provide a successor, were abolished.

In the last forty years there have been no male children born into what has become a very limited imperial family. This has made it necessary to consider the possibility of a female eventually once again becoming the tenno as a reigning empress. This would not require a constitutional amendment but it would require a change to the Imperial House Law. At present imperial princesses cease to be 'imperial' when they marry and for some Japanese the adoption of a matrilineal line of succession instead of a patrilineal could be a sticking point. It would also lead to the end of the unreasonable pressure apparently still being placed by Household officials on the Crown Princess to produce a male heir.

Professor Shillony considers that the most important issue for the continuance of the imperial institution is to ensure its continued relevance for Japanese people. The present Emperor in 1977 while he was Crown Prince declared (page 261); "When we look at the tradition of the imperial family, we see that it is mainly a tradition of gakumon (learning) and not of bu (fighting). Very few emperors donned military uniform. I would like to continue this tradition…The phenomenon of symbol emperors is not a post-war creation. In my view, the emperors have been symbols since antiquity." This may well be the case, but at least the emperor should be accepted by the constitution as 'head of state' as in practice he has been by foreign countries to which he has paid state visits. A 'symbol' also needs to be able to fulfil a meaningful role and not be totally hedged about by imperial household bureaucrats.

Shillony thinks that the imperial family might regain relevance through its support for the protection of the environment and he suggests that: "The archaic rites of the Japanese emperor [e.g. in relation to Japan's rice culture], which for a long time have been a source of embarrassment to modern-minded Japanese, may in the future appear as a symbolic ceremony of paying tribute to mother nature." Perhaps so, but while we do not need or want to see the imperial family becoming a more frequent source of scandal and gossip as has happened to the royal family in Britain, Japan's imperial institution would benefit from a more open culture.

A beginning was made when the present Crown Prince stayed in Britain as a student at Oxford from 1983-85. This showed him how ordinary people lived and enabled him to gain a better understanding of the world around him. His memoir Thames to tomo ni, which I have translated and which will be published in English by Global Oriental later this year under the title The Thames and I, reveals his natural human charm and sense of humour. Perhaps it was this fact which led the Household to delay for many years permission for a translation.

For a different review of this book see: Review