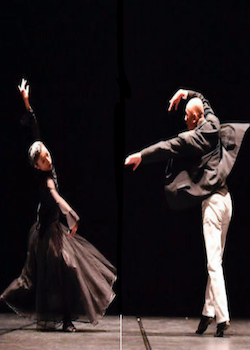 In the almost-darkness, there is a flicker of something beast-like, the sound of scurrying. A whisper of a tail, a tail too long to belong to anything other than something monstrous. Later, we discover it is a rat, a huge, humanoid rat. But to begin, we are led away from this terrifying presence, quickly forgetting about him as Teshigawa Saburo, in a gleaming white suit, becomes visible. He turns his face to look at something distant and horrifying, out there among the audience. He is looking directly at me.

I wonder, though, if everyone feels that way, if Teshigawa is fixing his gaze on each individual, somehow. There is a moment of intimacy between each occupied seat and the figure gazing up at them.

This scene dissolves and gives way to an hour-long exploration of a hauntingly-flawed relationship. It is the driving relationship in Dostoevsky’s The Idiot: the romance between Prince Myshkin and Nastasya Filippovna. The storyline is a distilled interpretation of the novel, and those desiring a translation of the plot’s intricacies into movement may be disappointed. But as an exploration of two humans, and their fleeting coming together, it more-than delivers. The two main dancers – who would be the only dancers, if it were not for the mysterious rat-figure – are danced by Teshigawa and Sato Rihoko. The two have worked and danced together countless times, meaning there is an easy synchronicity to their movements, even as they move separately. Such an off-stage connection certainly helps create a convincing relationship on-stage. Filippovna, danced by Sato. captivates Teshigawa’s Prince with the classic combination of beauty and aloofness, a textbook Ice Queen. Her costume helps craft her outward character; always in black, and in splaying skirts that add to her glamour. Yet the essence of her attraction is communicated by her fluidity whilst in motion. Her movement-lexis is of constant turning motions. She moves so fast that motion-capture images of her hands seem to drag in the air, and she never continues in the same direction for more than a few steps. The effect upon both the Prince and the audience, is bedazzlement.

A cutting juxtaposition between the movement-style of Prince Myshkin and Filippovna both adds to her glamorous aura and reveals the extent of the Prince’s flaws. Sato shines the most in the scenes where both dancers are on stage. Yet as Prince Myshkin, Teshigawa is at his best when performing a danced rendition of an epileptic seizure. This is fitting, as Myshkin’s epilepsy was one of the core concerns of Dostoevsky; he too suffered from the condition. Teshigawa’s exploration of this builds from a combination of movement, lighting, and music. A glowing yellow light shuts out the rest of the world, and the music transforms into half-stutters and incomplete melodies. Teshigawa seems to isolate each fragment of his body, down to the space between the knuckles of each finger bone. Perhaps repeated for a little too long to hold the audience’s interest, but a refreshing exposition of the ways that a human body can move.

Teshigawa’s Prince Myshkin is brought to life by Filippovna. At first, he follows her as if without choice, whilst she fails, perhaps refuses, to acknowledge his hungry eyes and earnest steps. The moment where she does accept him is one of the two moments in the whole piece where they physically touch. He takes her arm and walks with her briefly, they draw apart. The moment is fleeting, the movements unambitious, yet it was perhaps the climax of the piece. For a moment, they relax into one another, and there is a glimpse at a potential union, a potential future happiness. Yet, they separate. Their duets thereafter depart from a conventional duet. The dancers don’t touch, they don’t look at each other, they are not carrying out the same movements with their muscles. They are dancing together, but at first one thinks they might be in separate worlds. There are no giant lifts, no pas de deux of any variety. Yet Teshigawa creates the impression that these individuals are undeniably dancing together. Myshkin’s movements become a bit less stunted as he trails Filippovna, and they both carry out similar kinds of movements, a half-beat out of synch. Later, Sato moves in a jerking way, taking on a little of the Prince’s stresses and hardships. Their relationship is one without touch, despite the tactility of dance.

Unlike many contemporary choreographers, Teshigawa chose not to play with levels in this piece. The dancers do not jump. They barely leave the floor, nor do they get closer to the ground aside from a few brief instances. Lighting and staging are kept to the minimum too. This choice has the potential to become uninteresting, yet the simplicity of his use of levels certainly draws attention back to the relationship between Prince Myshkin and Filippovna. Meanwhile, the lack of any kind of place-markers on stages means that the choreography had to work harder to convey a sense of setting. The fact that it was possible to follow this – you can see the sense of wonder as Myshkin arrives in an invisible St Petersburg, for instance – shows testament to the skill of the dancers and their use of expression. The use of light to control the space, too, indicates a thoughtful light-design which pulled the audience towards certain moments, and suddenly threw the stage wide at others.

The piece is certainly not a full-length translation of Dostoevsky’s novel. Yet, the pieces Teshigawa has chosen to extract from the novel are explored in depth. We see the fascination of a wonder-struck man in a large city, his captivation with a woman, his struggles with a difficult-to-control condition. We see the dynamics and intimacies of a relationship; how two bodies come to orbit one-another, and how this falls apart.

It is the first time in almost a decade that Teshigawa has brought a piece to London and is showing until Saturday 30 March at the Print Room at The Coronet, Notting Hill.