A Robot in the Garden 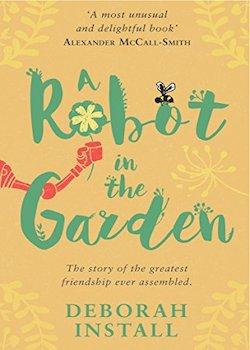 ‘Having a baby – then a toddler – in the house provided a limitless supply of material for comedy,’ Deborah Install says at the end of her first novel, A Robot in the Garden. ‘I would be lying if I said I hadn’t lifted elements of my son’s behaviour and applied them to my robot.’ The robot in question is Tang – a small, odd-looking, boxy robot that appears one day in thirty-something Ben’s back garden. His wife, Amy, takes a dim view of this rusty, apparently useless gadget; she’d prefer one of the newer models that everyone seems to have.

In Install’s futuristic world, androids drive your car, wash your clothes, cook for you. Ben, however, refuses to have an android in the house, preferring for Amy to do most of the domestic chores. Amy is a successful lawyer, whereas Ben is living off the inheritance left to him by his wealthy parents who died in an airplane accident. Despite his aversion to the newer models, Ben is instantly fascinated by little Tang. What is he doing in his garden? Where does he come from? Who built him, and why is he so different from all the other robots? Ben decides to find out, even if it costs him his marriage. He and Tang journey the world in search of the robot’s maker: they visit California, Texas, Tokyo, and a small island in Micronesia.

Although this debut novel starts slowly – with some unnecessary descriptions of silicone gel packets in backpacks and airplane ticket prices – it soon picks up speed. The jokes also become funnier as the story unfolds. As Tang learns to talk more and more, he becomes adept at delivering one-liners, and his various attempts at using his newly learned vocabulary have hilarious results. At one point, after passing the infamous shop in Tokyo, the little robot screams ‘Condom-ee! Condom-ee!’ at the top of his voice, much to  acute embarrassment of Ben. Tang expects films, food and entertainment from Ben on demand, just like a human child with his dad, and eventually grows to be the sweet, mischievous (mechanical) toddler.

The dash around the world makes for an exciting, pacey storyline, springing from city to countryside, rainy London to tropical Micronesia. There was a small factual error when a shinkansen (bullet train) takes the duo from the airport to central Tokyo instead of the ordinary express train, but otherwise its engagement with Japan was interesting and perhaps necessary in a comic novel about robotics and its possible effect on society.

The relationship between Ben and Amy is more complex than it seems at first: Install’s portrayal of a struggling marriage is well observed and thoroughly engrossing. Through his journey with Tang, Ben discovers aspects to himself he had never considered before. He re-examines his marriage and the death of his parents, and begins to see that his behaviour towards his wife was not exactly without its flaws. Returning to the UK, after a dramatic encounter with Tang’s maker, Ben and his robot take on an even more difficult task: winning back his wife from an obnoxious wealthy golfer called Roger.

A Robot in the Garden is a funny, whimsical and charming debut – the sort of book you can happily finish on a sunny afternoon in the garden, wondering if there’s a robot hiding behind the garden shed…