The Bells of Old Tokyo: Travels in Japanese Time 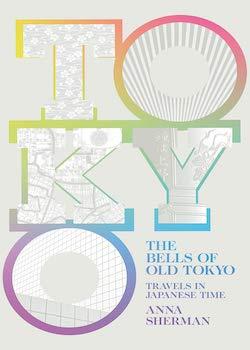 Though the undercurrent of antiquity is never really far away, to the casual visitor Tokyo is probably perceived as one of the most modern cities on the planet. To those who can take, and have taken, time to investigate the city either as a resident or frequent visitor it has so much more to offer than just its modern façade.

This book by Anna Sherman, her debut travelogue, is conveniently broken down into chapters and almost all of them focus on particular city locales. The details which follow are explained in such a way as to make it less of a tour guide and more of a prose poem, an ode to time, place, memory, history, and the way that the past overlaps with the present in modern day Tokyo.

Having visited Zojoji Temple in Central Tokyo Sherman begins to plot her forthcoming journeys using a map located next to the information plaque on the bell tower which pinpoints the location of Edo’s bells of time and which also charts, in overlapping circles, the sound range of the bells. Her decision to use composer Yoshimura Hiroshi’s book, Edo’s Bells of Time helps her to develop her intended journeys.

Her journeys revolve around frequent sojourns to her favourite coffee shop Daibo where seemingly in awe of the proprietor, an expert coffee maker, she recharges her batteries and gathers her thoughts before her next excursion. Whilst Daibo Coffee Shop has since closed the owner Daibo Katsuji, who still has an online presence providing guides to his style of coffee making, regularly materialises throughout the book, at the end of most chapters, acting as a sort of inspirational father figure to Sherman.

The assortment of objects, ideas and things that are covered within this framework of time are extensive. From the Oni Baba-like murdering crone of the pre Edo era marshland of Asakusa, through the commemoration of the spirits of the last Shogun’s Shogitai militia who were convincingly routed at the Battle of Ueno marking the final transition of the city from Edo to Tokyo. Sherman also covers the memorial of the 1945 air raids and the memorial architect’s ingestion of some of his father’s ashes, and Frank Lloyd Wright’s Imperial Hotel to name but a few. Never settling for the banal, Sherman finds and writes about the city’s historical Edo era and Tokyo’s more recent past, aspects that may have previously escaped even the notice of the city’s dedicated history hounds. It is said that visitors can discover and learn more in one or two of weeks than residents do in a lifetime. If that’s the case as a visitor and temporary resident Sherman has extended this simile exponentially.

While the chapter titles appear in kanji and then translated into English, there are other occasions in which kanji appear without any clarification or translation. For instance, the use of the kanji ‘大坊・珈琲店’ without an explanation is at first quite puzzling. These kanji reappear at the end of most chapters throughout the book, where the narrative revolves around goings on at the Daibo Coffee Shop. Taking into consideration this clue, the reason why the kanji are being used becomes increasingly apparent, even for non-kanji readers. It is the shop’s original name which translates as ‘Daibo・Coffee Shop’. Unfortunately the use of kanji without explanation in other parts of the book, as with 理想郷 (risokyo, utopia) in the ‘Acknowledgements’ section, and a few words in romaji (romanized Japanese words) without translation runs the risk of making the author appear aloof to the reader. Such inclusions should always be accompanied by translations for the benefit of all readers regardless.

Small criticisms aside the book is otherwise beautifully written and shows Sherman’s adroit handling of narrative. It manages to encapsulate the lyricism often associated, in the mind’s eye of many Western readers, with the East’s concept of cyclical time rather than the West’s linear notion. The occasional feeling of an almost dreamlike quality is made more so by the author’s way of interpreting the effects of time and the fragility of impermanence.

What Sherman has created is also a written counterpoint to the utilitarianism at large in and operating on the city’s infrastructure; a propensity to dispose of anything that is deemed “old” and replace it with the new. Even though this seems to reflect a pragmatic acceptance and cultural interpretation of the transience of things, objects and ideas, this also generally means that from one visit to the next one can never really know if what has been newly discovered will still be there. Especially after having personally witnessed the sudden disappearance of the historical haunt of the poet Masaoka Shiki and author Natsume Soseki, the two-hundred year old teahouse and dango (sweet rice dumplings) shop ‘Habutae Dango’ near Nippori Station. Making a record of such things, objects and ideas goes at least some way to addressing the loss associated with this predisposition. ‘You’re right about Tokyo’ she says to Tokugawa Tsunenari the 18th generation head of the house of Tokugawa, ‘It’s a surprise, when I read about things and then find that they still exist. So much has gone.’

There is a great ‘Notes’ section at the end of the book which provides more detailed less prosaic information in a succinct format which is extremely helpful. Endearing and inspiring in turns whilst it’s not one of the best books on Japan it might well qualify as perhaps one of the better ones.