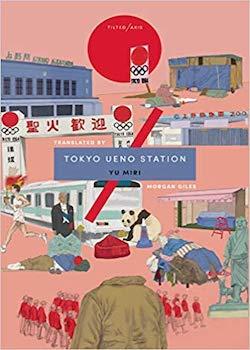 Ueno station is a singular place. Adjacent to Ueno Park – which was gifted by Emperor Taisho to the city in 1924 – the station is a hub to a wide and eclectic range of Tokyo dwellers. Some of them use it to commute, others come to peek at the famous pandas in the zoo, or some simply stroll among the flourishing sakura trees. However, what animated Yu Miri to write about the eponymous station is the forgotten history this place holds.

Through her haunting novel, she reveals the story of Kazu, one of the many young men who came from the Tohoku region after WWII. In search of a steady income to send to their family back home, many of them boarded the train to reach the capital through the ‘Gateway to the North’, a nickname that Ueno station earned after this wave of Northerners migrated to the city.

As they were mainly given constructions jobs, their efforts largely contributed to the post-war reconstruction of the city as well as preparing the 1964 Tokyo Olympics Games. Nevertheless, most of them ended up jobless and penniless when their services were no longer needed. Rapidly falling into destitution, a large portion of these labourers from the North were left with no other choice than to set up a tent at Ueno Park, near the station which remains the closest home from home within the capital.

Their stories might have fallen into oblivion, but the 2011 Fukushima incident reawakened the suffering of this destitute working class as their actual home was swept away by the tsunami and nuclear incident. For Yu, Fukushima holds a special meaning, as the author decided to move there shortly after the accident. Connecting the dots all the way to Ueno, the author interviewed the homeless in the park and took the opportunity to raise their voices through this short novel.

In Tokyo Ueno Station, the reader follows the ghost of one of these unfortunate young men, Kazu, whose fate is tragically linked to Ueno Park. Through dialogues with himself and the reader, Kazu recalls the many events in his life that led him to pass away, homeless in the park. From his childhood in Tohoku to his young adult life in Sapporo and finally his late years in Tokyo, the protagonist reveals the widening gap between classes in modern Japan as his life strangely mirrors that of Emperor Akihito.

Despite sharing the same birth year and welcoming their first sons to the world on the same day, the two men followed radically different paths. Nonetheless, the meeting point of these opposed destinies finds itself in Ueno Park. By documenting Kazu’s life as a series of heartbreaking and unfortunate events, the author introduces us to the people with which the protagonists shares a meal or a conversation, showing us that Ueno Park is home to hundreds of souls experiencing the same fate as Kazu.

Through her novel, Yu makes a bold but desperately needed statement about poverty in Japan and how it is largely disregarded as a social issue. The anecdote of the ‘Mountain Hunt’, where Ueno is cleared from all signs of homelessness residing in the park for a day on the occasion of the Imperial Family’s visit, exemplifies this issue perfectly. Rather than violently attacking the Japanese Government, Yu describes with a poignant authenticity the injustice experienced by Kazu and his peers which results as an even more powerful and moving critic.

Social issues have always been a personal favourite of the Japanese-Korean award-winning author whose sharp and honest perspective lead her to receive threats from the Japanese right-wing parties who consider that her novels tarnish the country’s reputation.

It is difficult to imagine a better match than translator Morgan Giles, who is herself a self-defined socialist. Her passion for the topic clearly shines through in the quality of her translation, flawless despite the added difficulty of the back-and-forth between Tohoku’s dialect and standard Japanese. She perfectly transcribes the cultural symbolic of Ueno Park to Western audiences, depicted in the novel as an ambiguous place where the internationally celebrated Japanese tradition meets the unappreciated and concealed parts of Japan’s history.

Despise being only over 150 pages long, Tokyo Ueno Station manages to immerse the reader into the hardship that is Kazu’s life and, as a result, shows a Japanese Government disconnected from the true needs of its lower classes. With the upcoming 2020 Tokyo Olympics Games the timing could not be better for such a powerful book to be released in order to prevent history from repeating itself.