Japanese Envoys in Britain, 1862-1964: A Century of Diplomatic Exchange 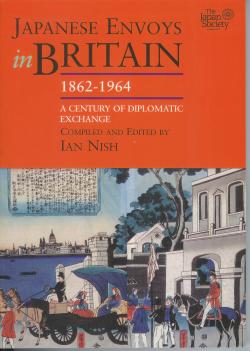 This is a highly readable and excellently researched book which skilfully charts the lives of Japan's envoys to the United Kingdom during the first century of Anglo-Japanese relations (1862-1964). Just as now, a hundred years ago London was a vibrant global capital but its political importance was far greater than today. This meant that Japan's representatives in London were often prominent political figures or rising stars of the diplomatic world. Thus, two former ambassadors, Takaaki Kato (1908-12) and Shigeru Yoshida (1936-38) went on to become Prime Minister. Yoshida is considered to be one of Japan's greatest postwar leaders and his time in London offers some enlightening insights about his character and style.

While only a very select few can capture the premiership, many of the ambassadors and ministers covered in the book attained the key post of Foreign Minister. Also a host of junior officials went on to become prominent figures after serving in London during the early stages of their careers, these included postwar Prime Minister Kijuro Shidehara and the Meiji renaissance man himself Yukichi Fukuzawa. The fact that so many significant historical figures served in the London mission during the initial century of bilateral relations makes the book a valuable reference resource. It is also worth noting that most of them, including Yoshida himself, were members of the Japan Society.

Many of the early envoys were extraordinary individuals with fascinating life-histories, a few could almost be described as adventurers. The career of Japan's first fully accredited ambassador, Tadasu Hayashi (1900-06), illustrates the incredible life-course of Japan's early envoys. Hayashi had spent two years in prison for fighting on the losing side during the Boshin Civil War. Captured after the battle of Hakodate, he had expected execution, but instead after a few years detention was released thanks to his skill at English. He was allowed to join the nascent diplomatic service, rising to the post of ambassador and then foreign minister. Besides his diplomatic and political achievements, he was also an accomplished scholar, translator, writer and thinker. Contemporary British writers described him as "A sort of Japanese Arthur Balfour [British PM 1902-05] with a detached philosophic mind and delightful manners (page 100)."

With such a rich cast of fascinating characters and gripping life stories, this book is not only a superb reference work, but also an extremely good read. In total, twelve authors, over half of whom are Japanese scholars, have contributed to this volume, but a huge amount of credit must go to the compiler and editor Ian Nish. Nish, an Emeritus Professor of International History at the London School of Economics, writes ten of the book's twenty-four chapters as well as the preface. He has meticulously researched the topic and produces some great biographies packed with a plethora of difficult to discover facts such has the cordial relationship between the wives of Shigeru Yoshida and Neville Chamberlain (page 169). Andrew Cobbing, lecturer at Nottingham University, contributes three illuminating chapters, Dr. Ayako Hotta-Lister pens another two, with other authors each writing a single chapter.

At the core of the book are the nineteen biographies of the envoys from 1862-1964, and these are supplemented by essays on the history of the Japanese embassy buildings in London and various aspects of embassy life during the period. The appendixes contain a useful list of envoys and ambassadors up to the present as well as a helpful brief history of the Japanese Ministry of Foreign Affairs.

The publication was launched at a well attended gathering held on the 19th June 2007 at the Daiwa Foundation's Japan House in London. Professor Nish gave an outline of the work and thanked all those who had made the project possible. The event was chaired by the current Japanese ambassador, Yoshiji Nogami, himself and a man with a distinguished career and an interesting background. Ambassador Nogami admitted that for him the book holds a special appeal because, as he told the audience, "The portraits of these early ambassadors stare down daily at me while I work." The ambassador also remarked that the lives of Japanese diplomats today are much easier than those of the early pioneers who lived in a much more "turbulent world."

The work was commissioned by the Japan Society to serve as the companion volume to an earlier Society publication "British Envoys in Japan, 1859-1972" (Global Oriental 2004). This volume completes the history of bilateral diplomatic relations up to the mid-1960s, and it represents a substantial contribution to our knowledge and understanding of how bilateral ties evolved. It is also an enjoyable book which provides some fascinating insights into a bygone age when ambassadors, as the Chinese proverb/curse goes, lived in interesting times.