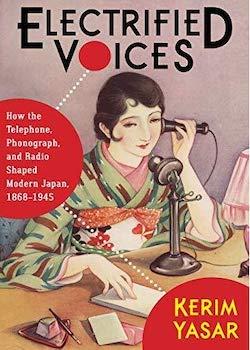 Kerim Yasar, currently assistant professor of East Asian languages and cultures at the University of Southern California, is a scholar of eclectic intellect. He began his studies as an ethnomusicologist and electronic/experimental music, but soon transitioned into literature and film studies in graduate school. This experience led him to cultural history and media study, which represent the starting point for this book.

Electrified Voices is articulated upon a key postulate that appears to be surprisingly counter-intuitive in some academic circles: ‘none of the senses is any more “base” or “noble” than another, and none is more “important” than another in any absolute sense’. Yasar begins his narrative about the ways in which modern auditory technologies such as the telephone, the phonograph and the radio have shaped ‘modern Japan’ (1868-1945) by asserting that ‘sound occupies an important place in the economy of the human sensorium’ (p. 4). The study of modernity, in fact, has for long privileged visual representative forms of cultural production such as photography, cinema and cartoons.[1] This tendency to privilege the visual has been challenged in the past decades by the emergence of new fields of enquiry such Sensory Studies, the history of smells and Sound Studies.[2] Yasar takes the perspective of Sound Studies to analyze modern Japan. At the core of this field is the rediscovers of the interactions between people and the soundscapes around them, which, at the same time, shape and are shaped by social relations. Electrified Voices thus stipulates that ‘sound is central to social and ritual life, and the ability to reproduce and transmit sound has radically altered human beings’ relationship to sound and thus to social life, including economic and political life’ (p. 5).

The author argues that the newly introduced auditory technologies represented a sharp technological rupture with Japan’s past, while at the same time functioning as vectors for a reformulation and thus re-popularization of some of Japan’s oldest oral practices. Contradicting popular narratives that portrait ‘tradition’ and ‘modernity’ as two warring opponents, Yasar demonstrates how Japan’s ‘residual orality’ (such as naniwabushi, narrative singing accompanied by shamisen, kodan, storytelling based on historical events, or heikyoku, recitation of the Tales of Heike) provided a receptive environment for the introduction of auditory technologies (‘technologized orality’).[3] Traditional forms of orality not only did not contrast with modernity, but they were actually galvanized by it. Through new technologies, ‘residual orality’ experienced a renaissance, while concomitantly transforming into new genres as they transitioned into new media and distribution platforms.

The first half of the book (chapters 1, 2 and 3) focuses more specifically upon sound and orality and the ways that these interact with language and music. Furthermore, alongside the aforementioned main argument, this first half also stresses another interesting insight: ‘media and materiality do matter, that the materialities of media transform people, institutions and societies’ (p. 9). In chapter 1, Yasar takes as case study the telegraph and the telephone, arrived in the late 19th century, to argue that these technologies were crucial in spreading phonocentric discourses (the assumption that speech and oral communication is inherently superior to written language) which informed Meiji language reforms. In chapter 2, the author explores the transition from premodern soundscape and tradition music to urban soundscape with Western and Westernized music. Thus making ‘indigenous musical tradition to be made foreign on its own soil’ (p. 16). The third chapter takes into consideration the emergence of the ‘sonic archive’ and the changes in conceptions of copyright and authorship that arose from the appearance of technologies that turned sound and voices into reproducible cultural artifacts.

The second part of the book (chapters 4 and 5) is instead intended to explore the interactions of sound technologies with the larger ‘media ecology’. Chapter 4, specifically focuses upon the acousmatic (body-less) voices from radio sport broadcasting and those directing morning rajio taiso (radio exercises). He argues that the human voice assumed a ‘new materiality and cultural role’ that was used by the Japanese state for political and ideological goals. The author, in Chapter 5, theorises radio drama as a distinctive narrative genre, which played e significant role in developing sound effects and voice acting (two key components of cinema, television and anime as well). The final and sixth chapter is divided in two main sections. The first part is dedicated to theoretical debates about the uses and function of film dialogue and soundtrack music, paying special attention to the writings by film critics Nakane Hiroshi and Yasuda Kiyoo and director Mizoguchi Kenji. The second part of the chapter is instead focused on the development of a specific dialogue style in jidaigeki (period dramas). It points out that period drama (a ‘technologized cultural production’) generated its own new language, although based upon a romanticized understand of the past.

Yasar’s contribution is an important first step in expanding Sound Studies beyond its Euro-American focus. In a field that has been criticized for its still prepondering whiteness in terms of scholars and subjects studied, a focus on Japan, the first non-Western nation to have undergone a substantial process of modernization, is indeed helpful to complicate a certain positivism and to see how technological transfers do not follow a fixed path and the responses to new technologies are always negotiated according to specific local conditions.[4] Thus problematizing the assumption that what happened in the US and in Europe in terms of society-technology relationship can be used as a blueprint for other cases.

One very interesting point raised by Yasar is the centrality of sound and sound technologies in shaping the kokutai (national body) and the Japanese imperial project. Needless to say, it would be impossible for one volume to cover all aspects of the Japanese soundscape, yet it would have been interesting to see how sound and orality were received and negotiated within the diversity of the Japanese imperial society. When approaching modern Japan, it is very crucial to bear in mind that the perceived racial homogeneity of today was neither a historical fact, nor part of certain discourses about the Japanese polity.[5] Since the conquest of Hokkaido, the Ryukyu Kingdom, Taiwan, Korea and parts of mainland China, Japan had expanded to be a wide raging empire assimilating many ‘races’. As we open to the possibilities of a different racial structure within Japan, then it will be interesting to see scholars like Yasar from Sound Studies to ask more question about the interplay of perceptions about races and the different soundscape that these create; as well as investigating the various ‘residual oralities’ that were brought in Japan by its inter-imperial networks. One interesting example might be, for instance, the popular Korean anthem ‘Arirang’. It would be interesting to use the analytical frameworks of Sound Studies to analyze the evolution of this popular tune from a simple song, to a nationalist anthem for Koreans, to finally become a rallying anthem for the entire Japanese empire.[6]

[3] Yasar takes the terms ‘technologized orality’ and ‘residual orality’ from Walter J. Ong, Orality and Literacy: The Technologizing of the World (London: Routledge, 1982).