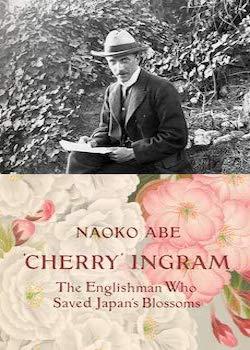 If we are to read history as the story of great individuals, then few would be better placed to symbolise the ties between Japan and Great Britain across the 20th century than Collingwood ‘Cherry’ Ingram. Born in 1880 and living until he was a hundred year old, the scope of Ingram’s life – and his passion for cultivating and preserving cherry trees – feels appropriately epic in stature. This marvellous biography, penned so eloquently by Naoko Abe, crucially captures not only the story of Ingram’s own life, but the spirit of the times in which he lived; the last days of Empire, and of a Britain and Japan struggling to balance ageless tradition with the relentless rhythms of modernisation. It is an elegiac tale, tinged with the same bittersweet beauty of Ingram’s beloved cherries, but one that resounds with humanity and the desire by good, honest people to preserve what matters most to them.

The book quickly presents a compelling image of Ingram, a picture-perfect archetype of the Edwardian gentleman-at-leisure if ever there was one. Detailing his privileged upbringing and illustrious family background (his grandfather was the founder of The Illustrated London News), the early chapters feel almost like an episode of the BBC’s Who Do You Think You Are. these are richly evocative of the era, kick-starting a veritable Who’s Who of prestigious figures from the British upper classes that continues throughout the book. As Ingram’s relationship with Japan develops following trips in 1902 and 1907, those familiar with the early interplay of relations between Japan and the West will spot references to many familiar faces: Kaempfer, Hearn, Mitford, amongst others. That said, while those knowledgeable about the relevant periods of Japanese history will undoubtedly glean the most from this volume, Abe is at pains to illustrate that this English edition of the book (adapted from a Japanese version released some years back) has been fully fleshed-out with the relevant material to ease newcomers into the appropriate cultural and historical context.

Indeed, Abe – a Japanese journalist and writer now living in London with her British husband – feels particularly well placed to catalogue Ingram’s life; the reporter’s eye for meticulous detail and a strong central narrative paired with some rather charming personal anecdotes that lend a warmer touch and almost novel-like turn of phrasing at times. For a book that must rely largely on words to convey the irrepressible beauty of the cherry blossom, it feels only natural that it should be allowed free reign in using a rich panoply of description – ensuring an emotiveness to the language that elevates this above and beyond a simple factual account of Ingram’s life. And for when words fail, an added surprise is the book’s ample collection of archive sketches, hand-drawn by Ingram himself – a man of many talents, indeed!

From enthused amateur to elder-statesman-like expert, Ingram’s passion for the cherry tree and a trainspotter-like obsession to cataloguing and collecting new varieties is palpable. The book recalls countless memorable escapades – chief among them Ingram’s efforts to restore the ‘great white’ taihaku variant to Japan. Following four years of failed efforts to send a sample cut from his garden back to Japan, he finally hit on a solution – wedging the tender scions into potatoes and sending them via the Trans-Siberian Railway; ensuring they arrived quickly enough and moist enough to avoid the perils of withering en-route.

Ingram’s own words, recorded meticulously in his diary entries, resound with an earnest poeticism and self-evident love of natural beauty. The effect is rather like bathing deeply in successive washes of the titular cherry blossoms, each new colour gradation lapping gently at your senses. This is a book for nature lovers through and through, and you will come away feeling like you’ve been given a crash course in horticulture – something we imagine Ingram himself – whose 1948 tome Ornamental Cherries became an instant classic – would very much approve of.

Going beyond Ingram’s own life, the real heart of the book rests in its counterposing of the glorious idylls of the British countryside in the late 19th and early 20th century with the horrors of war and the resulting loss of a somehow simpler age of innocence. For both Britain and Japan, it seemed, the old way of doing things – of engaging with and cherishing the wild as opposed to smoothing it off and homogenising it – was doomed to die a slow death in the face of modernity; all the more so when these images of idealised pasts were mutated and co-opted into gross visions of nationalism. The pain-staking detail given to the horrors faced by British Prisoners of War, as well as the final fleeting moments of Japanese kamikaze pilots, are almost too much to bear. And yet, they feel symbolic, not only for presenting a snapshot of the tangled, complex relationship between Britain and Japan before and after World War Two, but also for how Ingram had to confront his own feelings for Japan. By using Ingram’s life as an ‘in’ to the thornier moral complexities of history, readers are guided through the material with a sensitive, yet unflinching hand.

For those new to the history of Anglo-Japanese relations and the symbolic significance of the cherry tree, there could be no better introduction than this. Abe’s book is accessible in the extreme, and with British appetites for all things Japanese whetted by the forthcoming Tokyo 2020 Olympic and Paralympic Games, now feels like the most opportune timing to play to as wide as possible an audience with a book like this. And for those who have already read countless blow-by-blow replays of Japanese history from the Meiji Restoration onwards, Abe’s own take makes for a lean refresher. The universality of Ingram’s story – and how it links into wider narratives about Britain and Japan – has clear appeal: the book was selected as a Radio 4 Book of the Week on its week of publication.

At once both a cracking story and a serious work of scholarly ambition, Naoko Abe’s account of Ingram’s life succeeds through virtue of being more than simple biography. It is a love letter to the joys that life can unveil when you find a passion and make it your own.