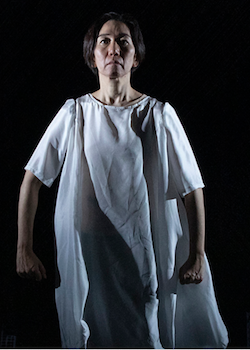 How should we tell stories that matter?

It is a question I’m forced to ask after leaving the Ovalhouse, out of its cool interior and onto the burning asphalt, the weather a mixture of hazy sunlight and hot blasts of wind. The inside of a performance space can be a way to take you in, strip away all the tints on our knowing, and teach us something new. Moving from that self-contained space and back into our tinted world, I was left asking if this was a way we can teach and remember.

Because Scored in Silence was a mixture of performance, lecture, history lesson, and an experiment with new technology. The audience – strictly limited to 40 people – are sat down and then given an induction into the various straps and wires attached to each chair. The audience glance at each other nervously, a little as if they were about to strap into a flight. It is called 40 Woojer © vibration  technology, a belt that vibrates synchronically with the movements, and with certain sounds, made by Artistic Director and Performer Chisato Minamimura. It adds depth to the piece, marrying movement, sound, and vibration together to truly jolt and shock and surprise, but it also makes the piece incredibly accessible, so that those that cannot hear can also feel the emphasis of certain points of the piece.

This technology augments Scored in Silence, an original telling of the bombing of Hiroshima that disengages from the trans-historical and makes this event more human, more tangible. There is an obvious personal plea behind why Minamimura has chosen this topic. Her frequent reminders that ‘people like me’ suffered in a specific way, a way that has been overlooked for decades. Her constant ties between these past sufferers and her present, moving body remind us that these historical actors are not merely ghosts. They once were embodied too, and they once suffered in a very human way. Minamimura talks of the atomic bombing using tiny anecdotes, kaleidoscoping together to produce a story refracted through many perspectives. At times, these stories were told by Minamimura’s movement, or a mixture of movement and sign language. At others, there were holograms projected an image of a victim, speaking for themselves. The use of holograms, and the clipped, accent-devoid male voice speaking over the performance, took the feeling from being on a flight to a space flight – a jump into the future, even as we were, collectively, looking back.  The videos and images were an inspired way to add specific detail to dance, a performance-type which sometimes needs transcription or description for audiences to make sense of it.

Despite this, Minamimura’s movements were strong enough to have conveyed meaning on their own. Her body, mostly hidden beneath something loose-fitting and white, functioned to convey information. Her movements echoed this, each one strong and precise, often amplifying the sign language she was speaking with whilst she danced. Her timing was impeccable, something that would have been no mean feat when having to match it to the audience’s vibrating belts. She danced half-lit, casting 4 evenly sized shadows up towards the ceiling. Even her shadows appeared well thought-through.

What the movements, lighting, and sound combined to do was to talk about forgotten experiences, shedding light on a part of history – the deaf experience of the Hiroshima bombing – has yet been able to tell. The only qualm I had here is that it is almost impossible to talk or dance about such a fragile piece of history without allowing your own viewpoint to drive it. Another audience member pointed out to me – something that I’d overlooked whilst absorbed in the performance – that it isn’t enough to start with Hiroshima, that perhaps there could have been some more consideration around why it was dropped.

Nonetheless, the fact that dance and movement can be used to fill in a gap in our history gives us another reason that the arts continue to be relevant: they can help us tell important stories. This way of communicating – forcing the audience’s attention to focus on what is in front of them, flushing all of one’s senses with that information – is a way to make storytelling, not only of pure fiction but also of history – more compelling. This is a new way of remembering, and a way to remember buried pasts.