Harunobu Triptych and Other Poems 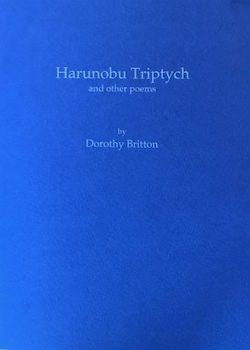 Dorothy Guyver Britton was a uniquely talented figure in the pre and post war Anglo-Japanese community of the coastal Kanto region. Born in the international city of Yokohama in 1922, Dorothy’s early life was exceptional, as her British father, Frank, and her American mother Alice, created an impressive scheme of private education for their daughter. This included English literature and serious study of the Japanese language. This was most unusual as Westerners, outside the diplomatic community, rarely studied Japanese language seriously at that time. Equally remarkable were Dorothy’s rich social contacts as a child, with members of the Imperial family and the Japanese aristocracy. This gave her a surprisingly rich and varied range of Japanese friendships.

This remarkable life was sharply interrupted by her father’s sudden death in 1934. As a consequence Alice and Dorothy spent much of the late prewar and wartime years in Britain and the United States. Dorothy studied, somewhat unhappily at Claremont, a Christian Science School in Surrey. There her interest in the Japanese language was clearly frowned upon by the staff. Later she worked more effectively at Mills College in California where she successfully studied musical composition under the distinguished French composer Darius Milhaud. This added significantly to her knowledge of current Western music.

Following Japan’s defeat Dorothy and her mother returned to their home in Hayama where they resumed friendly relations with their Japanese neighbours. They also mingled with newly arrived British servicemen and diplomats. By the mid 1950s Dorothy had renewed many of her prewar friendships with distinguished Japanese. For a time she worked as a librarian in the re-opened British Embassy. Later she began regular broadcasts for N.H.K., the national broadcasting service. In 1953 she also provided a Japanese language commentary for a television broadcast of the Queen’s Coronation.

Soon after, she began regular educational broadcasts on television, including English lessons for Japanese viewers. In 1959 she joined Aso Kazuko, the wife of Yoshida Shigeru, in establishing the Elizabeth Kai (Society), a group which brought together British and Japanese women resident in Tokyo and its suburbs. In these years she composed a religious cantata And Certain Women Followed Him which was performed in Tokyo. In 1968 Dorothy made one of her regular visits to England and married the widower Air Vice Marshaft Sir Cecil Bouchier who she had initially met in the occupation years. Following their marriage the couple returned to Dorothy’s house in Hayama, with Derek her husband’s handicapped son. Care for Derek now became one of Dorothy’s major concerns. In these years she neglected musical composition but devoted much time to writing and translation.

Of her work in these years her translation of Basho’s Road to The Deep North may have been the most impressive. After her husband’s death in England in 1979 Dorothy and Derek returned to Hayama. In the following years Dorothy prepared her late husband’s memoirs of his military life for publication. In 2010 her lengthy creative role in Anglo-Japanese relations was formally recognised by the award of the MBE in the Queen’s birthday honours list. Two years later at the age of ninety, Dorothy began to prepare her own memoirs for publication. The resulting work Rhythms, Rites and Rituals: My Life in Japan in Two-Step and Waltz time appeared in 2015. Sadly Dorothy died shortly before the Japan Society in London organised a special meeting which celebrated her diverse achievements.

Finally, this summer her final literary work Harunobu Triptych and other poems was published in Tokyo, the result of the joint efforts of British and Japanese friends – Catherine Nagashima, Arimura Naomi and Peter MacMillan. Besides containing 31 of Dorothy’s poems this slim volume includes affectionate writings by Princess Tomohito of Mikasa and Catherine Nagashima. Dorothy’s collection of poems illustrates her highly personal travels across three continents. In this volume her poems are accompanied by her own sketches; some of which were influenced by the works of famous ukiyo-e artists. This brief book, an expression of Anglo-Japanese shared sympathies was first made available at the recent final meeting of the Elizabeth-Kai in Tokyo. It is regrettable that this forum of Anglo-Japanese fellow feeling will not continue further into the present century.