Yone Noguchi: the stream of fate 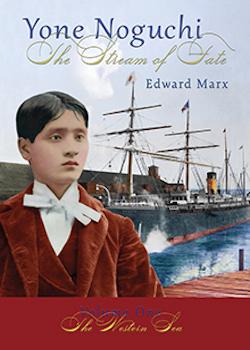 Noguchi Yonejiro (1875-1947), who was known in the West as Yone Noguchi, had a roller-coaster of a life but his works have fallen by the wayside. Who was he? He grew up in Japan and entered Keio Gijuku (now University) but in 1893, before he had turned 18, he abandoned his studies and sailed to California, apparently without any particular object in view. There he worked as a journalist and sometimes as a domestic servant, but he also became acquainted with the American poet Joaquin Miller and other writers of the San Francisco Bay area. Perhaps as a consequence he decided that his calling was to be a poet. He published two books of poetry in English in 1897 and then moved to New York, where he published his first novel, The American diary of a Japanese girl (1901). It was at this time that he had an affair with the writer Charles Warren Stoddard, and contracted a secret marriage with Léonie Gilmour (1873-1933), an American educator and journalist. Shortly after he moved back to Japan in 1904 and became a professor of English at Keio University, he learnt that Léonie had given birth to a son; this was Isamu Noguchi (1904-1988), who was later to become an acclaimed sculptor and artist. In 1913 Noguchi travelled to Britain and lectured on Japanese poetry at Magdalen College, Oxford, at the invitation of the poet laureate, Robert Bridges, and he also lectured to the Japan Society in London.

By the time he made a lecture tour in North America in 1919-20 he had made the acquaintance of W. B. Yeats, Ezra Pound and George Bernard Shaw, among other contemporary luminaries, and already enjoyed considerable fame. He was the first Japanese to publish poetry in English and he wrote extensively on Japanese drama and art in English, including studies of the major ukiyo-e artists. At the very least, then, he was an interesting transcultural figure, an early example of a Japanese achieving literary recognition in the English-speaking world and writing on Japan in English.

On the other hand, Noguchi has been described as an opportunist, a fifth-rate poet, and as a strident nationalist, and doubts have been raised about his command of English. Morita Norimasa, the author of the essay on Noguchi in the eighth volume of Britain and Japan: Biographical Portraits (ed. Hugh Cortazzi) was distinctly unimpressed, describing Noguchi’s lines, ‘Mystic spring of vapour:/ Opiate odor of colours:/Alas – I’m not all of me!’, as ‘a mere collocation of unusual words… many of them lifted from Edgar Alan Poe’s writings’ (p. 406). Morita goes on to quote what he calls a ‘piece of doggerel’ entitled ‘Butcher Americans and British, Our Enemies’, which shows how wholeheartedly Noguchi adopted wartime rhetoric. What is more, Edward Marx, the author of the book under review, admits that Noguchi’s moral failings included ‘dishonesty, deception, plagiarism, bigamy, warmongering, cowardice, hypocrisy, racism, recklessness, and downright stupidity’ (31). If readers are not already put off by this catalogue of failings, they may nevertheless wonder if Noguchi is worth such close attention, for this substantial volume takes readers only up to the year 1904, when he returned to Japan.

Marx first came across Noguchi in the context of modernist English poetry when doing his PhD at the University of New York. His avowed aim here is to write a biography that steers a middle course between the adulation and the criticism, but he is all too aware of the unreliability of Noguchi’s own autobiographical writings, which seem to be riddled with invention. Marx has clearly conducted extensive research in various archives, as is obvious not only from his footnotes but also from the many contemporary illustrations he has managed to find. The book would have benefited, however, from the attentions of an editor, for several reasons. Firstly, there is a great deal of uninteresting quotation from letters and other writings that could more economically have been summarised or omitted. Do we really need to know, for example, that Stoddard wrote in his diary, ‘all of us at home all day’ (264)? Secondly, whenever Noguchi makes a new acquaintance Marx launches into a digression in the form of a potted biography. While some of these are interesting, they do disrupt the narrative and in most cases go into more detail than seems necessary. The subject of the book, after all, is Noguchi. Thirdly, it is surely no longer necessary to rearrange all Japanese names to suit Western norms.

What do we learn from this exhaustive biography? First of all, the extensive quotations from Noguchi’s correspondence and writings reveal an uncertain grasp of English idiom, and this raises the question of how much his various friends and lovers revised his poetry. Marx is not afraid to describe some of it as ‘gibberish’ and shows in a telling comparison of a draft with the published poem how much had been changed (195). Secondly, it is clear that Noguchi’s activities and reputation were shaped by some of the events he lived through. His move away from California was probably occasioned by the rising tide of opposition to ‘Oriental’ migration; his success in England (both Thomas Hardy and Laurence Binyon were impressed by him) was to some extent due to the good will generated by the Anglo-Japanese Alliance; and his journalistic successes in 1904 were due to his ability to translate Japanese reports on the outbreak of war with Russia into a form suitable for an American audience, although his writings were, as Marx notes, ‘heavily propagandistic, promoting views of the Japanese as ultra-patriotic, self-sacrificing heroes’ (376). Thirdly, he had roles to play both as an interpreter of Japan to the West, explaining haiku to English-speaking readers, and as an interpreter of the West to Japan, being the first Japanese to write on Yeats, whom he had met during Yeats’ American tour (354, 338). In addition, there is much fascinating detail on the Japanese community and press in California in the 1890s and on American japonisme in general, much of it informed by impeccable research.

Noguchi himself, it has to be said, does not come across as an appealing character or even an interesting writer. What is interesting, though, is that many Americans and Britons were attracted by his writings. Exactly what they were attracted by is difficult to say. Willa Cather, writing in 1898, long before she achieved fame as a novelist, provides some clues in a review: ‘While Noguchi is by no means a poet in the large complicated modern sense of the word, he has more true inspiration, more melody, from within than many a greater man’, she wrote, and she described his verse as ‘simple, spontaneous, unstudied songs’ and ‘conspicuously Oriental’ (177). Perhaps that was the point. In 1900 Otono Watanna published a novel entitled A Japanese Nightingale which enjoyed much success, but she was no Japanese: she was in fact a Canadian of mixed Chinese-British ancestry named Winnifred Eaton who had adopted what she supposed to be a Japanese pseudonym. There was evidently some cachet in being Japanese. It seems likely that Noguchi made the best of his advantages as a Japanese in America, but he remains, to this reviewer at least, an enigmatic figure. Perhaps the best thing that can be said about him is, as Marx writes of the journalist Frank Putnam, that he had ‘more poetic ardour than talent’ (232).

Marx has clearly done extensive research and has presented the most well-documented account of Noguchi’s life so far. I hope that in the second volume he will tackle the difficult question of the reasons for the popularity of Noguchi’s writings and provide an index.