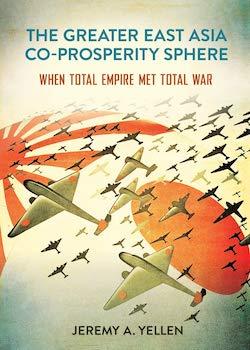 If you are looking for a captivating grand narrative about how the Japanese military elite, intoxicated by the rhetoric of Pan-Asianism and imperialist megalomania, formulated a coherent masterplan for the control of the entire East Asian region, and perhaps the world, this is not the book you were looking for.[1] But if you are willing to question many of the popular assumptions about Japan in the time of total empire and total war, then Yellen’s book is definitely the one.

The Greater East Asia Co-Prosperity Sphere (thereafter the GEACP Sphere) is in fact a truly timely addition to the historiography of modern Japan in general and a fundamental contribution to the study of the Japanese wartime experience. In what could be the very first monograph on the topic written in English, the GEACP Sphere is a very well-constructed study divided in two main sections covering respectively the high politics of the ‘core’ and the anti-colonial responses of the ‘periphery’. The convincing argument put forward by Yellen is that the ‘Greater East Asia Co-Prosperity Sphere’ (thereafter the Sphere) was a  ‘contested, negotiated process, one that bound Japan’s imperial dreams with anti-colonial aspirations of nationalist leaders in Burma and in the Philippines’ (p. 11). In this book, therefore, the Sphere is not theorised as the consequences of Pan-Asianist indoctrination, an economic masterplan, or a mere imperialist slogan. The Sphere, he argues, was Japan’s response to the diplomatic challenges that arose from the establishment of the post-WWI international system and the attempt to build a new regional economic and political order.

At the core of Yellen’s argument is the idea that the Sphere never became a clear and articulated ideology or plan (p. 6). It was a discourse in flux, negotiated, contested and appropriated by a wide array of actors from both the colonial centre and its periphery. The life of the Sphere was closely linked to Japan’s fortunes during the Pacific War. Yellen identifies three main transformations in the life of the Sphere. An initial phase, in which Japan broke with the post-WWI order (the so-called Washington-Versailles System) and declared its intention to establish a ‘new order’ based upon its mix of anti-colonial anti-Westernism and forms of ‘new imperialism’ (granting nominal independence, while maintaining de facto control over the colonies). The second phase, at the peak of Japanese offensive in Asia, the Sphere was idealised as a political economic hierarchy under Japanese leadership. In this particular moment, Japan’s ‘total war’ theorists and the architects of Japan’s ‘total empire’ conceptualised Asia as an appendage of the Japanese economy. In these schemes, Japan had to retain most of the high-skills and capital-intensive products, while lower-skilled labour-intensive products, along with natural resources, had to be located in the colonies. The final phase coincided with the post-1943 period when defeat was a much more real possibility for Japan. Paradoxically, Yellen notices, this is when more concrete ideas about the Sphere emerged.

The author makes his argument through six main chapters. The first three chapters are mainly dedicated to the high diplomacy in Tokyo and its main characters. Chapter 1 discusses the formation of the Tripartite Pact and how it was driven by Japan’s fear of Germany, which posited a direct threat to Japanese interests in Asia. In Chapter 2 Yellen focuses on Foreign minister Matsuoka Yosuke who envisioned the Sphere as a return to forms of ‘old imperialism’ such as the sphere-of-influence diplomacy. Matsuoka thought that the liberal consensus of the post-WWI era was crumbling and that nations were re-forming their own political and economic ‘blocks’ and Japan could not be left out. The third chapter is centred upon the whirlwind of private and public imaginative efforts that tried to define the Sphere. Most interesting, this section investigates how Japanese fortunes in the war had a direct impact on how the Sphere was constructed.

With Chapter 4 we enter the second part of the book and thus the focus progressively shifts away from Tokyo and towards the colonial elites of the Philippines and Burma. In this chapter, Yellen unravels the incorporation of the two colonies within the broader Japanese empire, asking crucial questions about why did these ‘patriotic collaborators’, as Yellen defines them, actually collaborated with Japan and what were their real goals?

Chapter 5 analyses the late turn of the Japanese empire towards a vocabulary of liberal internationalism aimed at rallying supporters in Asia while seeking peace negotiation with the Allies. Perhaps more importantly, this chapter also focuses upon the ‘contested’ nature of the Sphere and how nationalist leaders in the colonial periphery re-appropriated this rhetoric of liberal internationalism to further their goals of national independence. The final chapter explores the consequences of the previous chapter by looking into the ‘nominal independence’ granted by the Japanese to the Philippines and Burma. Local leaders in fact sought to build up their nation-making experience and to use the Japanese to form crucial institutions that were deemed fundamental for the future independence of these countries.

It could be argued that the limit of Yellen’s book is that in its portrayal of politicians and nationalist leaders, a good part of the gruesome and brutal details of the Japanese imperial expansion in South East Asia are left unexplored. Although the author recognises this early in the book, it could have helped to incorporate more decisively into the narrative how Japanese brutality across Asia influenced the re-conceptualisation of the Sphere from the colonial periphery. Furthermore, we cannot but notice that to focus on the colonial elites of just the Philippines and Burma has somehow limited the scope of the study, which, arguably can be much broader. In the vast and complicated structure of the Japanese empire, composed by ‘new imperialist’ polities (Manchukuo, the Dutch East Indies, Burma and the Philippines among the many) and more canonical ‘old imperialist’ regimes (Korea and Taiwan), Yellen side-lines other political groups that were also part of the Japanese empire such as Azad Hind, the Provisional Government of Free India formed in exile with Japanese support.[2] The experience of Indo-Japanese anti-colonialism and the contributions of Indian ‘patriotic collaborators’, such as Rash Behari Bose, Mohan Singh and the more notorious Subhas Chandra Bose, could be also analysed to test Yellen’s argument and to expand its scope to the totality of Japan’s complex wartime experience.[3]

Having said that, The GEACP Sphere is surely a well-argued and excellently structured book that will soon become a core reading for the history of modern Japan. The book provides a detailed introduction to the historiography of the Sphere and of the Japanese empire from both the Japanese and the anglophone perspectives. Furthermore, students will also benefit from the extensive bibliography gathering primary and secondary sources, both printed and online, from more than six different countries, truly making this book an example of meticulous transnational research.

Perhaps more crucially, Yellen’s argument restores the agency of those key actors from the colonial periphery that have often been silenced due to the presence of grand narratives too focused on the events of the ‘great men’ in Tokyo, but also silenced by the stigma of wartime collaborationism that still haunts many countries. By proposing a detailed and varied array of perspectives, Yellen thus decentralises the history of the Japanese empire and shifts the attention upon the interconnectedness of centre and periphery. Although we had assumed that the power unbalance between the two necessarily translated into Japanese hegemony, Yellen convincingly shows that there was much more going on under the surface and ‘secondary’ characters often held much more power than we realised.

[1] For just a brief list of the many books on the topic see here.

[3] For the controversy of Subhas Chandra Bose’s grave in Tokyo see here.