Flyboys: A True Story of Courage 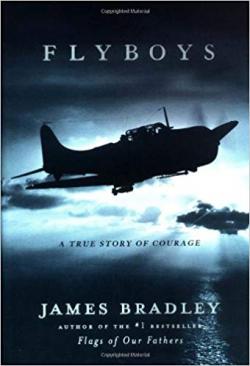 This book is about airplanes, WWII warplanes in particular. As someone whose fond memories in his boyhood were attached to model warplanes hung from his ceiling, I found myself picking up a copy at a bookstore in Singapore.

The book is more than about the war in the Pacific; it tells the story of how airpower gained supremacy against battleships, and why and how the US and Japan entered into hostilities. Former president George H.W. Bush is featured as one of the heroes whose little-told stories came to light for the first time. Written in an extremely narrative style, the book promises to be a best seller, in part also because its author, James Bradley, gained national fame in the U.S. for a previous work about his father, who was one of those thin-faced soldiers who raised the U.S. flag on top of a blood-covered hill on Iwo-jima.

Flyboys reveals the location where the Japanese shot down the fighter plane flown by the future President of the United States. It occurred off Chichi-jima, one of the Ogasawara Islands. Mr. Bush and the author together made a visit to Iwo-Jima where both were photographed as is shown in the book. It is hence very likely that both the former President and his son, the current occupant of the White House, will read this book with keen interest.

George H.W. Bush was not alone in his mission to attack Chichi-jima. This book answers many questions. What target were they after? What were the Japanese doing on a tiny island about double the size of Central Park in New York? What happened to those who crash-landed or parachuted out? Why is it that their whereabouts and eventual fate had long been classified in the US governmental archive and that not even their family members were allowed to know? The answers are multi-fold, but horrendous to say the least. The Japanese killed the P.O.W.s in the cruelest possible way.

Does Flyboys generate anti-Japan hate? It could well be. But war is about hate, the author argues. And hate has neither national borders nor historical, religious, and racial differences among peoples. If the Japanese beheaded U.S. P.O.W.s, then it was the Americans who napalmed children and women in the cities of Japan. The Japanese may have raped and killed thousands in China, but Americans did the same to Native Americans and Filipinos, the author writes.

In essence the book's message is: "They were no different from what we were." It successfully articulates why the Japanese had to be imperialists themselves and why they fought against the entire world. A thorough, balanced look into Japan's past is evidenced throughout. Still, one has to murmur, what the Japanese did in China and in the islands of the Pacific Ocean are unspeakable and unjustifiable. And that, for this reviewer, is the most lasting image of this book, regardless of what the author's intentions were.

With more than 58 years behind us after the war, memories, mostly horrendous memories, still linger, only to be revisited yet again. Many in Japan should read the book and try to understand what views Americans and other English speaking peoples could come to have towards them in years to come.

This review first appeared on the GLOCOM Platform and is reproduced with permission.Tomohiko Taniguchi is an Editor at Large for Nikkei Business Publications, Inc.