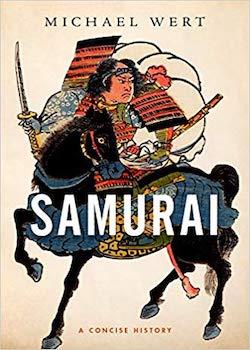 From the Kabuki characters posing on stage in a mie pose through manga and anime to the historical sword fighting epics of Japanese cinema, the concept of the samurai has pretty much always provoked a variety of images in the mind. From the merciless assassin to the compassionate yet doomed hero, from the wandering masterless ronin to the philosophical kensei sword saint of legendary skill. In this very handy sized and concise book of just over one-hundred pages Professor Michael Wert, an associate professor at Marquette University, attempts to explain in easy to understand terms the origins and development of the samurai, that most archetypal of Japanese warriors.

The book is broken down into five chapters. The first ‘Introduction: Becoming Those Who Served’ covers the development of the notion of samurai (literally ‘one who serves’). In the process Wert disdains the use of the term samurai to describe early Japanese fighters in favour of the English word warrior. Wert’s explanations cover the ever changing dynamics and ambitions of militaristic groups and individuals, between their parochial provincial-based interests and the Court and Capital. The general range of multiple occupations that people were otherwise engaged in when not busy with military style functions is also discussed. Finally Wert examines the rise of the early military leaders Taira Masakado, Taira Kiyomori, and Minamoto Yoritomo; and the Gempei War (1180-1185) after which there emerged for the first time a centralised ruling warrior regime.

The second chapter ‘Early Warrior Authority’ covers what for some, given the seeming pre-eminence of men in Japanese history, might be the surprisingly pivotal role of women in the succession and transference of power and property between and within court centred and local provincial factions. The chapter also explores the establishment of the first Shogunate at Kamakura in 1185 and the development of its bureaucratic structures and expertise under the subsequent Hojo regency regime (1199-1333). It also analyses the tightening of affiliations with and within the nobility by warrior factions, and the progressive step from the military’s previously subservient role to the Court to one of joint rule. The author then poses some interesting conjectures about the Mongol incursions which interrupted these developments. This, he asserts, enhanced Hojo jurisdiction whilst counterintuitively marking the beginning of the end of the Kamakura military rule, yet leaving behind an early warrior legacy for subsequent regimes.

Chapter three ‘War and Culture’, the longest and most in depth chapter in the book, initially deals with the rise of the Muromachi Shogunate under the Ashikaga. It sheds light on the behind-the-scenes manipulation of warrior cliques by the Court and the ascendancy of regional governors and warlords to the detriment of and away from Kyoto-based Court rule. Contrary to generally held misperceptions about the primacy of individual declaiming sword wielding samurai in battle, Wert then goes on to enlighten the reader by discussing the actual methods of combat and types of armour and weapons used, including firearms, along with the later development and typical architecture of castles. Then, almost in contrast to earlier assertions in this chapter about the individual behaviour of samurai on the battlefield, the author looks at the acceptability of informal, respect based, samurai codes of ritualistic conduct and combat used during conflicts. Because of the chapter’s title and that it starts with the example of Oda Nobunaga’s interest in and practice of Noh, the reader might be mistaken for making an early assumption that this chapter is about the civil cultural side of warrior’s way of life. The reader is fairly quickly disabused of this notion when it becomes apparent that the chapter, almost in its entirety, mainly covers their conduct in combat. It might perhaps have been more apt for the chapter to have been titled ‘The Culture of War’ even though warrior incursions into the civil artistic life of the nobility are briefly touched upon at the end of the chapter. The chapter concludes with the end of Ashikaga dominance, the first major and extremely violent urban conflagration in Kyoto during the Onin War (1467-1477), and the reassertion of the power of provincial warlords. This is followed in the final part by the coverage of the first glimmerings of national consolidation by the first two of the triumvirate of national unification, Oda Nobunaga and Toyotomi Hideyoshi.

The further consolidation and codification of the authority, familial infrastructure and behaviour of warrior elites under the Tokugawa dominated Edo era (1603-1868) is covered in chapter four ‘Warriors in an Age of Peace’. Wert asserts that the stability of power relationships between the Tokugawa administrative military authority and other primary and subsidiary domains, in particular outside tozama daimyo and vassal fudai lords, were not as rigorous as is generally thought. The chapter also explains the further attempts at the consolidation and classification of non-warrior groups beginning with Hideyoshi’s sword hunt to deprive the general population, for the foreseeable future, of swords. Though swords (and firearms) were afterwards, supposedly, the exclusive reserve of the warrior class, the author also affirms that this was subject to a variety of interpretations dependant on the local situation and status of the non-warrior commoner; what the author refers to as the ‘Commoner-Samurai Grey Zone’.

The final chapter ‘Inventing the Samurai’ discusses the beginnings of what might be accepted as the notion of idealised samurai, their categorisation as a social group and the further cross fertilisation of their culture with that of commoners. Alongside this, the author emphasizes, it came the increasing importance of samurai genealogy, the publication of etiquette manuals and warrior rosters. From a brief explanation of the ideal samurai as portrayed in Kabuki emerges a description of the Ako Incident (also known as the 47 Ronin) a historical event in the 18th-century which became pivotal in samurai history. The discussion attempts to demonstrate the important influence of the incident and associated Confucianist and later Neo-Confucianist philosophy on perceptions of samurai culture both then and in a post samurai world. It also links the incident to the book of idealist samurai conduct Hagakure (Hidden amongst the Leaves by Yamamoto Tsunetomo). Yet, contradictorily, Wert asserts that all of this high idealism led to the satirical parodying and denigration of the model of the idealised samurai, ironically by samurai commentators themselves. The chapter is rounded off with discussions about the fertilisation of commoner culture by samurai tales, and the transference of allegiance by the samurai from the Shogunate to the Court as a result of incursions by Western powers which, ironically, led to the Meiji restoration of Imperial rule and the subsequent demise of the samurai. The final section deals with post restoration legacy of the samurai with some interesting hypotheses which, as in earlier sections, run counter to the generally accepted received wisdom about samurai that tends to permeate popular culture.

Overall this is a curious, thought provoking and oftimes exciting romp through the history of the samurai in Japan. There are quite a few ideas, interpretations and propositions that go against the grain of what many readers may have thought and accepted about samurai. If the intention was to provoke as well as educate the book succeeds. It is interesting that the author seems to try to limit the amount of terms usually rendered in the Japanese language, instead preferring to use English equivalents. This may be perhaps as the intention is for the book to eventually be published as part of Oxford University Press’s Very Short Introduction series.