Yasuke: The True Story of the Legendary African Samurai 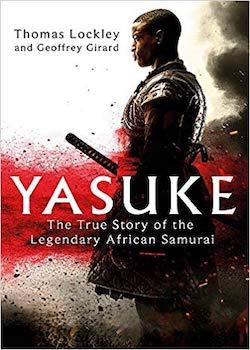 Yasuke loomed over them focused, undaunted. Wrathful. One of the soldiers glanced at the sword in his own trembling hand and his look revealed all: it was not weapon enough to fell such a man… The three soldiers remained spellbound, unable to move. Even words failed them. “Yasuke de gozaru,” the African samurai challenged, stepping forward into attack position. I am Yasuke.

Powerful anecdotes like this lie at the heart of Thomas Lockley and Geoffrey Girard’s account of the life of Yasuke, the African mercenary-turned-samurai who found himself, against all odds, immersed in the very heart of political and military power in 16th century Japan, thousands of miles from his birthplace. The two authors, bringing their expertise from academia and ‘historical adventure’ non-fiction respectively, combine forces to unleash a fast-moving narrative that takes us from Yasuke’s arrival in Japan under the service of Jesuit missionaries, through descriptions of his physical prowess and aptitude at the Japanese language, to his position serving famed daimyo Oda Nobunaga. To this end, we are offered a uniquely imagined ‘eye-witness’ viewpoint that not only tells us what happens, but strives to let us feel it too.

The book purports to be both a biography and military history, and that’s perhaps how best to approach the style at play here. At times – as the opening snapshot suggests – it may read like macho, mass market ‘lad lit’, but while these quasi-fictional narrative embellishments add considerable flavour to the telling of Yasuke’s story, it is important to recognise that they are always in service to a wider historical context. Yasuke is central to this tale, but he is by no means the only key player.

Indeed, one of the most engaging figures of the book’s opening passages is Italian missionary Alessandro Valignano, whose efforts to ingratiate himself to the powers that be in Japan (and by extension, further the aims of the Christian church there) feels symptomatic of a crucial era in global history where, suddenly, even comparatively isolated realms like Japan became part of a larger field of play. As the book puts it, ‘the world had grown much smaller’.

Central to this idea of global flows is, of course, Yasuke himself. As a black man, finding himself as both a minority and curiosity in Japan, ample space is given to unpacking the practical and moral complexities of how he found himself to be there in the first place, and how his ‘blackness’ was envisioned once he was there. Chapter Five (entitled ‘The Terms of Employment’) in particular shares a fascinating discourse on the nuances of indentured servitude, as well as how race was viewed at the time. Namely, that modern concepts of skin colour stem from 18th and 19th century ‘scientific’ classifications, and that to Europeans of the 16th century, darker skin simply signified ‘non-Christian’. It is in chapters like these that the book’s core premise – essentially a story of a pioneering figure, intriguing precisely because of his exceptionality – feels both freshest and at its most interesting. The version of history offered is not strictly revisionary, but it continually asks us to question what we think we know of both Japan, and the people that interacted there, whatever their race or nation.

Elsewhere, we tread more familiar ground, and when, later on, we are told of Yasuke’s encounters fending off attacking ninja, it can all feel a little too much like wish-fulfillment ‘Who’d win? Ninja or Samurai?’ war-gaming, like a kid throwing all their favourite toys down on the play mat and hoping for the best. In much the same manner, the book’s middle passages can feel a little bloated at times, and a momentary diversion into Yasuke’s former life serving as a mercenary in India is tonally at odds with the consistently Japanese atmospherics that suffuse the rest of his story. There is also the larger question of how much this book is ultimately Yasuke’s story specifically, and how much is simply another in a long line of dramatic rehashings of this particularly tumultuous period in Japanese history. We might ask – who exactly is the intended audience here, and are those coming to this tale specifically for Yasuke interested in the immensely rich backdrop of associated historical personages? It is easy to imagine some, lured in by the book’s unique premise, becoming wearied by the seemingly endless procession of assorted feudal politicking.

That said, the book saves its masterstroke till late in the game – this comes in the form of a nail-bitingly dramatic set-piece that sees Nobunaga’s last moments (and Yasuke’s pivotal role in them) unfolding in real-time as he makes his final stand against treacherous rival factions. The sense of timing is palpable as, faced with insurmountable odds, Nobanaga decides to commit harakiri, bestowing Yasuke with the incredible owner of bearing his severed head and sword to his son Nobutada. Fleeing the scene with seconds to spare, dodging bullets and arrows, to arrive breathless at Nobutada’s feet with the fateful package, the authors’ movie-like command of the narrative reaches its peak here with an action-packed dynamism straight out of a thriller.

But there’s more – in some ways even more compelling than this frenetic explosion of violence is the book’s more reflective final chapter where we are presented Yasuke’s legacy in an overview of materials featuring him (and figures inspired by him) that takes us right up to the likes of anime, manga and video games in the present day. The long shadow cast by Yasuke’s story is an impressive one, all the more so given we have just spent so many pages in his direct company. His life, for hundreds of years lost to history, was ultimately not in vain.

As one of the most readable histories to grace the field of Japanese Studies in a while, Yasuke’s story deserves as wide a readership as possible – not only for its subject matter, but also the consummate skill by which its authors have blended history and dramatic narrative in a manner that opens the tale up in a way far drier academic tomes invariably fail. Some may sneer at the glossy, movie poster-esque cover art or the simplicity of the language – but this is to both ignore the clear scholarly input addressed in the ample end-notes, and to miss the point in the purpose of a book like this: To above all else, tell an engaging tale. And what a tale Yasuke’s is.