Forty Seven Samurai : A Tale of Vengeance and Death in Haiku and Letters 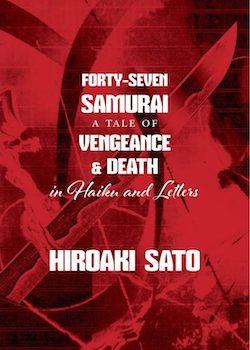 The most famous vendetta in Japanese history has led to many publications, most in Japanese. The majority of English publications are either fictional adventure novels or in depth academic studies. Until now there has been a dearth of material which focuses on the personal narratives of the protagonists. However, this deficiency seems to have been addressed with this eminently readable and engaging account in the English language by the skilful Japanese commentator Sato Hiroaki.

The first chapter sets the context leading up to the Ako Incident (1702) when the retired court protocol expert Kira Yoshinaka was decapitated by the daimyo Asano Naginori’s retainers. This was after Naganori had attacked Kira with a sword within the precincts of Edo (former Tokyo) castle for which he was sentenced to death by seppuku. The chapter includes profiles of the key participants involved in the initial attack on Kira, as well as that of the ‘dog’ shogun Tokugawa Tsunayoshi who was responsible for the eventual handing down of the sentence of seppuku on Naganori. There is also a discussion of the enlightened Genroku period with achievements in learning that seem commensurate with that of the opening of Japan at the end of Sakoku (national isolation) in the 1850s. What is interesting is the inclusion of facts that are probably otherwise not particularly well known outside of academic and Japanese circles. For instance that Ako castle was built by Naganori’s grandfather which would explain the violent rhetoric and the initial almost unshakeable reticence of Naganori’s retainers to surrender it to the shogunate. Given the relative paucity of information like this in English language publications it is facts like these that make this narrative particularly engaging. These relatively unknown events also include a fascinating discussion about the ironic predilection of the shogun for the death penalty for human beings in spite of his ‘Pitying the Sentient Edicts’. Such facts and discussions make this narrative so much more accessible than some of the more academic accounts that are currently available.

In the second chapter the build up to the fatal attack on Kira is covered and begins with the tense debates between the two main factions of the Ako retainers, the ‘radicals’ and the others, about the handing over of the Ako castle to the shogun’s forces. The intimate personal testimony and exchanges that it uncovers, including those between Ako retainers in both Edo and Ako, make this much more readable than many other third person academic narratives. The letters also expose the vehement feelings of the Ako retainers about the unequal treatment afforded Kira by the shogunate. What is very interesting, given current debates about the use of social media, is how some of the poetic forms that were written and shared at the time are so evocative of and almost mirror the modern use of social media, including subtle forms of ‘trolling’. For instance, the approbation that followed when Oishi Kuranosuke and a few other retainers didn’t act on their initial avowed intent to commit seppuku in order to follow their lord in death. There are a number of incidents and testimonies that cover gay relationships and issues amongst some of the Ako retainers. A charming inclusion amongst these is the testimony that Oishi’s son Chikara gave about his relationship with a male kabuki actor called Aiyama Konosuke who was also an iroko (prostitute). Except for one online article in English all other mention of this appears only in very brief online posts in Japanese. What the book neglects to mention is that after Chikara’s seppuku, Konosuke became a Buddhist monk to pray for the repose of Chikara’s soul. Oishi Kuranosuke’s lyricism also comes to the fore towards the end of the chapter where, interspersed with his poetic and dramatic texts, the perception by others of his perceived predilection for licentiousness during the period before the revenge attack is discussed.

The third quite substantial chapter covers the development of the essential components that were set up in preparation for the raid on Kira’s mansion, the attack itself, and briefly the aftermath. The chapter begins with an examination of the 1697 travelogue by Otaka Gengo who was considered, as well as a number of other Ako vassals, a haiku master. This chapter focuses more on haiku than any of the others with some fascinating personal accounts expressed in part by prose and in part by verse. For instance, one haiku in particular alludes to a potential reason for Asano’s attack on Kira. There is also some discussion, based on a letter from the haiku master Kikaku, which seems, at first, to lay to rest the uncertain origin of Otaka Gengo’s vendetta related haiku inscribed on a public monument in Ryogoku bridge children’s park: ‘Sun’s bounty swiftly shatters the thick ice’ (hi no on ya tachimachi kudaku atsugori). With plenty of personal testimonies and haiku, this chapter is one of those that makes what at first was a good book an excellent one and makes it hard to put down.

Though there is very little about the seppuku of the retainers the other elements of the aftermath to the incident are covered briefly in the fourth chapter through a review of the popularity of the vendetta in the public eye in opposition to the censure of the authorities. The chapter covers its public exposure by means of ‘camouflaged’ bunraku (puppet) and kabuki theatre adaptations, the many adaptations of the story abroad, and subsequent bans post WWII through to its resurgent popularity in later years, particularly on film. However as regards the first kabuki performance, there only was a first generation kabuki actor called Miyazaki Denshichi; there never was a second generation actor by that name. And he and the first generation Nakamura Shichisaburo didn’t abandon the play, which was actually called Akebono Soga yoichi (Night Attack by the Soga Brothers). It was in fact banned after three days by the authorities for ‘political reasons’ when it was performed at the Nakamuraza kabuki theatre in the second lunar month of 1702.

In the fifth chapter, the issue of the ‘disloyal’ retainers is covered with a succinct look at the motivations and direction some of them took with a few third person accounts and some other imagined ‘dramatic monologues’ including what happened to Kajikawa Yosube, the person who prevented Asano Naganori from killing Kira in the matsu no o-roka (Great Pine Corridor) of Edo castle.

One of the most fascinating parts of the book is the final chapter. It is highly likely that this English translation of Akutagawa Ryunosuke’s short story ‘Aruhi no Oishi Kuranosuke’ (One Day in the Life of Oishi Kuranosuke) of Oishi’s reflections on his life and his involvement with the campaign is the first time this has been available in translation. It cannot be better summarised than with the critic and author Kato Shuichi’s words that the story ‘turns Oishi’s selfless heroism on its head by presenting the image of a lone protagonist reflecting on how future generations will look upon his actions… Akutagawa’s new interpretation goes beyond conventional form and probes the inner world of his hero’.

The afterword covers the history of revenge in Japan and looks further at the friction between subjective interpretive Confucian philosophy and explicit shogunate governance regarding the act of vengeance, a debate that continues to this day. Only the salient points are covered, so for those interested in exploring this particular aspect in detail, it has been covered in much greater detail in other academic publications. This section also looks at the equivalence in punishments for the attacker and the attacked which for witnesses of the vendetta and its aftermath at the time seemed somewhat lacking in justice; an interesting debate. There is also a discussion about what may be a little known legislative procedure at the time, that of revenge registration, which permitted revenge to be legally carried out.

There are no illustrations other than the inclusion of several crests associated with the various factions involved in the saga at the beginning of each chapter and a couple elsewhere. Though the book does cover a lot of what has until now not been readily available in English other than in academic papers, it still leaves some of the main perennial questions unanswered, those which will probably remain unanswered in perpetuity. In summary this is wonderfully fascinating book written in a non-academic style which covers the Ako Incident in a way that comes up with facts and narratives that other academic books have neglected which is what makes it so engaging. Though there are a few odd transliterations, the use of Japan bridge instead of the generally accepted name of Nihonbashi for instance, and some occasionally strange syntax, this is thoroughly recommended reading.