Kita Ikki and the Making of Modern Japan: A Vision of Empire 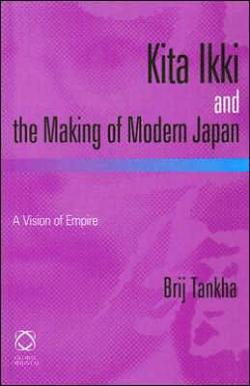 Kita Ikki (1883-1937) is difficult to pin down ideologically. He blended socialist and nationalist ideas, advocated a coup d'état at home and expansion abroad, and inspired the Young Officers to carry out their bloody rebellion of 26 February 1936. Yet, he also preached democracy, was attached to China, and had warm feelings toward the United States. He did not admire the European fascists and wrote his important works before Mussolini and Hitler. Whatever one may say about Kita Ikki, he was one of Japan's most original political thinkers in the twentieth century. In 1947, Maruyama Masao branded him "the ideological father of Japanese fascism," calling his writings the Mein Kampf of the right-wing terrorists (Thought and Behaviour in Modern Japanese Politics, ed. Ivan Morris, Oxford University Press, 1963, p. 28). In 1969, George Wilson, in his book Radical Nationalist in Japan: Kita Ikki, 1883-1937 (Harvard University Press, 1969), described Kita as a radical nationalist influenced by Confucian thinkers of the Tokugawa era as well as by Western ideologies of his own time. According to Wilson, Kita rebelled against the conservative and authoritarian Meiji regime, preaching radical political and social changes.

In this book, Brij Tankha, reader in modern Japanese history at the University of Delhi, presents a somewhat different picture of Kita. He does not characterize Kita as a nationalist, for the simple reason that most other thinkers of his time, including Christians and Socialists, were also nationalists. Instead, Tankha depicts him as a reformist. Kita regarded the Meiji Restoration, Tankha shows, as a positive, democratic revolution that destroyed the power of the privileged classes and put an end to the old class system. But the Restoration was incomplete. It had to be continued by destroying the undemocratic powers of the financial magnates (zaibatsu) and the bureaucrats (kanbatsu). The people should be freed, Kita believed, from the yoke of these modern oligarchies and given back control over their welfare and destiny.

Kita's vision was not limited to the Japanese islands. He was personally involved in the Republican Revolution in China, urged Japan to liberate India, and called for an end to Western domination of Australia and Eastern Siberia. He did not, however, advocate the liberation of Korea, which he thought should be integrated into Japan as the Seikaido (Western Maritime District). He argued that in the First World War Japan should have sided with Germany and Turkey in order to combat Russian and British imperialism (pp. 136, 289). He wished to set up a "revolutionary empire" under Japanese leadership to establish freedom and democracy in Asia. Despite his imperialist vision, Kita was not a racist. He rejected the notion of a pure Yamato race, claiming that the Japanese were a mixture of Korean, Chinese, Southeast Asian, and aboriginal elements (p. 264). He did not regard Japanese culture as being superior to other cultures. His heroes were Napoleon and Lenin (p. 181), and the international language he envisaged for the liberated Asia was Esperanto (p. 193).

Although most nationalists of his day preached loyalty to the throne, Kita was more interested in the Japanese people than in their monarch. For Kita, the emperor was a symbol, similar to his present status. Kita ridiculed the idea of bansei ikkei (the eternal unbroken line of emperors), dismissed the claim that the imperial family was in any way unique (p. 23), and rejected the concept that Japan was a family state with the emperor as its father (pp. 39-40). In his view, the significance of the monarch was not his divine descent but his position as "the people's emperor" and "the representative of the people" (p. 214). He scorned the old-style monarchy and called for the abolition of the nobility and for the nationalization of the emperor's property, something that the Allied Occupation did a few decades later. No wonder some of his writings were banned and others were censored by the authorities.

Tankha's book is not intended to be a biography. It provides basic biographical data, but does not mention such details as Kita's fortune-telling wife or his adopted Chinese son. It does not try to solve the mysteries that still surround Kita, like his connections with Prince Chichibu and with the Mitsui concern. The book is about the thought rather than the life of Kita, and the arrangement of the chapters centers on his works. Tankha compares Kita's writings with those of his contemporaries. He examines what the intellectuals, visionaries, reformers, and political activists of the early decades of the twentieth century wrote in such magazines as Chuo koron, Taioô, Toyo keizai, Nihon oyobi Nihonjin, and Heimin shinbun. This enables him to place Kita in the context of the intellectual discourse of his time.

Despite the fact that Kita was a self-taught man and did not graduate from university, he was versed in the writings of Confucian thinkers as well as in the political literature of the West of his time. Like others, he was attracted to socialism, because it combined moral ideals, like justice and freedom, with a scientific analysis of history. He befriended the socialist leaders Kotoku Shusui and Sakai Toshihiko, and for a time worked for the socialist newspaper Heimin shinbun. But Kita was not a blind follower of Western theories, and he advocated a Japanese brand of socialism that would fit traditional values. In 1906, at the age of twenty-three, he wrote his book Kokutairon oyobi junsui shakaishugi (The National Polity and Pure Socialism), in which he pointed out the common ground between Japan's "national essence" and socialism.

Kita justified Japanese imperialism on socialist grounds: "Britain, astride the whole world, is like a very rich man, and Russia is landlord of half the northern world. Doesn't Japan, which is like a propertyless person in international society, confined to these small islands, have the right to go to war to overthrow their domination in the name of justice?" (p. 282). As the first modern nation in Asia, Japan carried the responsibility to liberate other Asian nations as well as to ensure the livelihood of its own people. Kita called on Japan to seize Manchuria in order to protect China from Russian machinations, but also as a place to settle poor peasants from the home islands. For Kita, Japanese imperialism was both a destiny and a necessity.

The reforms Kita advocated were neither fully democratic nor pacifistic. He demanded universal suffrage, but only for men. Women, he argued, should concentrate on their natural calling to bear children and should not be dragged into politics. Workers should be protected and given a fair share of the profits, but strikes would not be permitted. The revolutionary empire would maintain a large army and navy and would engage in wars to fulfill its destiny. This nationalistic brand of socialism appealed to the radical rebels of the 1930s and dragged Kita into an involvement in the abortive coup of 1936, for which he was sentenced to death and executed.

Tankha does not deal with Kita's attachment to Nichiren Buddhism, probably because he regards it as part of Kita's biography rather than his philosophy. It is indeed difficult to explain how a rationalist thinker like Kita, scornful of religious myths, embraced the creed of Nichiren. Perhaps he saw himself, like Nichiren, as a persecuted prophet, warning his countrymen of an impending disaster and prescribing the way for salvation. In his writings, Kita alludes equally to Confucian, Buddhist, Christian, and Moslem concepts. Thus he writes: "The Japanese rising sun flag, after defeating England, reviving Turkey, making India independent, and China self-reliant, will shed the light of Heaven on all the people of the world. The coming again of Christ, prophesied all over the world, is actually the Japanese people's scripture and sword in the shape of Mohammed" (p. 293).

Brij Tankha's book draws attention to the research on Japan that is being done in India. It is attractively presented, but it is a pity that the publisher has allowed typographical errors and misprints to mar the text, but they do not detract from the book's importance. The author should be congratulated for presenting us, in the second part of the book, with a full translation of Kita's programmatic treatise of 1919, Nihon kaizô hôan taikô (Fundamental Principles for the Reorganization of Japan). This work, which was heavily censored and clandestinely circulated, had a great impact on many Japanese in the 1930s. Its translation sheds more light on that turbulent period.

A different version of this review first appeared in Monumenta Nipponica, winter 2004.