Japan Be a Strong Nation (Nihonyo Tsuyoki Kuni to Nare) 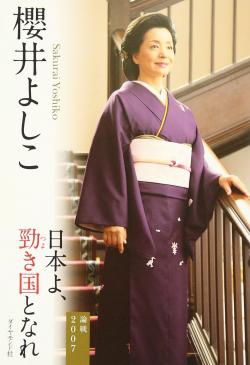 Ms. Yoshiko Sakurai is a well-known journalist and social critic in Japan, especially famous for her rightwing and sometimes ultra-nationalistic stance. She regularly contributes her essays on social issues to various journals and magazines, and this book is a collection of such contributions of the past year or so. Her interests are wide-ranging, from such domestic issues as the bureaucratic reform and the education reform to such international problems as the history issues and the North Korea problem, a fact that can be seen in the table of contents in this book.

Her current state of mind is clearly expressed in the Introduction, where she maintains that the US is gradually losing its power, whereas China is rapidly increasing its presence and influence in Asia. In particular, Ms. Sakurai emphasizes that China has adopted "shrewd tactics" to isolate Japan morally by publicizing the history issues and to weaken the Japan-US relationship by organizing anti-Japanese movements within the US, where the recent Senate resolution on the "comfort women" (or "sex slavery") problem is a result of such movements. She also points out that some high-ranking officials in the US government appear to be leaning toward China, rather than Japan, due to the lack of knowledge about China's intentions and Japan's position on their part. Therefore, she concludes that Japan should be strong and have courage to speak out and insist on its principles and values for the purpose of overcoming adversity and leading the world in the 21st century.

Because of her seemingly nationalistic and anti-Chinese stance, Ms. Sakurai has become a very popular figure in Japan, especially among conservative Japanese, both young and old. Having read all the chapters of this book, however, one might wonder if she is a real nationalist as a Japanese (like Tokyo Governor Shintaro Ishihara, who is well known for his book "The Japan That Can Say No") or a hard-core anti-communist conservative as an opinion leader regardless of her nationality. Actually, she is relatively optimistic about American intentions to support Japan (for example, she denies a change in American stance toward North Korea), whereas she is overly critical of almost any move on the part of China. In this sense, her argument may be appealing more to conservatives in the US rather than to their Japanese counterparts.

All this could be understood well by looking at Ms. Sakurai's personal background; she was born in Vietnam, educated in Hawaii, and trained to be a professional journalist at the Tokyo bureau of the "Christian Science Monitor," before becoming a TV newscaster in Tokyo. Therefore, she should be considered an international journalist with critical views on communism in general and China in particular, rather than a nationalistic opinion leader in Japan. At any rate, Ms. Sakurai is one of the few Japanese women (rather, the few Japanese, for that matter) who can stand up and say no to China.

This review was produced in collaboration with Global Communications Platform and first published on the Platform: http://www.glocom.org/