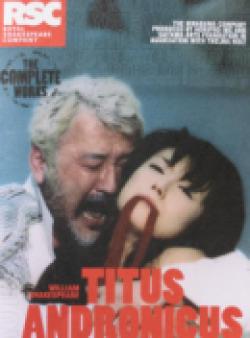 Titus Andronicus
Directed by Yukio Ninagawa, produced by Horipro Inc and the Saitama Arts Foundation in association with Thelma Holt
Performed by the Ninagawa Company at the Royal Shakespeare Theatre, Stratford-upon-Avon from 16th to 24th June 2006, supported by The Daiwa Anglo-Japanese Foundation

As part of the Royal Shakespeare Company's the Complete Works Festival, legendary director Yukio Ninagawa's Japanese language production of Shakespeare's bloodiest play was transported around the globe to Stratford-upon-Avon for just ten performances. Although Titus Andronicus is not so frequently performed, it's a strangely compelling tale of intense violence and horrific retribution. Ninagawa masterfully utilizes these extremes to create a brilliant new interpretation which creates the illusion that Japanese is Shakespeare's original language.

The basic plot revolves around the triumphant homecoming of the battle-weary Roman General Titus Andronicus (Kotaro Yoshida) from war with the Goths. He brings with him the Goth Queen Tamora (Rei Asami) and her three sons as captives. The bloody juggernaut of revenge is set in motion when Titus has Tamora's first born-son sacrificed in recompense for the death of his own sons. To even the score, Tamora's two surviving sons rape Titus' gentle daughter Lavinia (Hitomi Manaka) and afterwards cut off her hands and tongue. For good measure they frame Titus' sons in a murder, and the innocent lads are subsequently executed, but not before poor Titus is tricked into chopping off his own hand in a vain bid to save his boys.

Enraged by the mutilation of his daughter and slaughter of his sons, Titus plots a stomach-churning revenge in which he kills Tamora's sons, pulps their corpses into a pie which he then tricks Tamora into consuming before the blood-drenched, high body-count climax.

The raw brutality of Shakespeare's earliest tragedy probably explains why the play is so infrequently performed, but this challenge appears to have attracted Ninagawa to stage it. Tsukasa Nagagoshi's pure white set designed forms the sanitized arena within which the inhuman revenge of Tamora and Titus is graphically conjured forth. It is dominated by a large white statue of Romulus and Remus being suckled by a huge wolf,

Ninagawa brilliantly exploits the contrasting elements of the play to spellbinding effect, drawing the audience ever deeper into its dark heart. So successful is his interpretation, that Japanese feels the natural medium for the tragedy. This is a great achievement as many Japanese language Shakespearean productions suffer from the sense that they are somehow faint imitations of a greater work. Ninagawa, or Big Nina as producer and fellow collaborator Thelma Holt calls him, had the script especially translated into Japanese by Kazuo Matsuoka to achieve this effect for what he says is the right and faithful sense of the original.

Ninagawa and Holt's partnership succeeds in bridging the gulf between the English and Japanese literary worlds. Ninagawa believes that Titus reflects "today's turbulent world, a world beset with endless war in one place or another." Before seeing the play, I asked him if he did not find it an incredible challenge to stage such a bloody and horrific work, one in which it is hard to feel any empathy for the characters, apart from the tragic Lavinia who is raped, mutilated and ultimately murdered by her own father. He replied, "Isn't the world like that today?" I said I thought planet earth was more cheerful, but I have to admit that his sheer genius as a producer has succeeded in creating an amazing interpretation of Shakespeare's darkest play, seamlessly spanning the cultural divide.