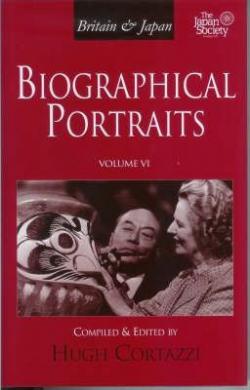 This book is the latest (and, sadly, probably the last) of the volumes about Anglo-Japanese relations that have been sponsored by the Japan Society of London since 1991. The series, together with two companion volumes on British and Japanese diplomats, now comprises nearly 250 essays. This volume contains an invaluable index for the series as a whole.

Edited by the indefatigable Sir Hugh Cortazzi, who also contributes six of the essays, this volume is characterized above all by variety. The 34 essays cover politicians, royalty, businessmen, scholars, writers and artists.

At one end, we have scholarly studies, such as Peter O'Connor's piece on the journalist Hugh Fulton Byass, which actually manages to cram an account of the fortunes of the entire English language press before World War II in Japan into 12 pages; at the other extreme, there is Roger Buckley's elegant meditation of under five pages on the difficulty of knowing just what experiences the cult British novelist, Angela Carter, actually had in Japan.

Some pieces are based on research; others are personal memoirs - including no less than three accounts written by relatives or descendants of the subjects - containing much information not available elsewhere. Other essays are based primarily on archival materials, making them essential reading for historians of the period.

Reading the excerpts from, for example, the account of the Showa Emperor sent to London before the state visit by the British ambassador or the "Confidential Aims" of Prime Minister Edward Heath's visit to Japan, we feel that special thrill that comes from reading something not originally intended for public consumption. The volume ends with the British Embassy's report on the Beatles' visit to Japan in 1966.

Collections of essays are always hard to review - a mere list of the topics would use up the available space - but certain common themes do emerge. One of these is the strong strain of Japanophilia that has existed in modern Britain, despite diplomatic estrangement and war.

The most surprising example is Winston Churchill, who is convincingly shown by Eiji Seki to have had "a friendly, understanding and compassionate attitude" toward Japan throughout his life.

A second theme, particularly evident because of the inclusion of a number of essays about prominent Japanese businessmen, is the enormous role played by Britain in Japan's modernization. This is linked to a third theme, the blindness shown by the British to Japan's economic potential until very late.

A fourth theme is the characteristic sense of gratitude that many Japanese have felt toward Britain and the positive role that this has played in relations. Another theme is the importance of diplomatic relations between two countries that are monarchies, something that has been both an advantage and a source of many subtle difficulties.

There are only two essays in the book about Anglophile Japanese intellectuals. One is Norimasa Morita's absorbing account of the impact of England on the novelist and critic Kenichi Yoshida. The other is Rikki Kersten's piece on the influence of Oxford liberalism on the political thinker, Masao Maruyama. I would like to have seen more studies of this kind, showing us the cultural impact of Britain on Japan.

But if you want to know what the Chachiru-kai (Churchill Society) does, or why so many British royal family members had themselves tattooed in Japan, or which Japanese car is named after the hero of Little Lord Fauntleroy, or why the Beatles concert roused the ire of the right wing, then this is the book for you. In fact, I can recommend it to anyone interested in the intriguing course of Anglo-Japanese relations in modern times.

This review originally appeared in the Japan Times and is reproduced with the permission of the author. Adrian Pinnington teaches comparative literature at Waseda University.