Human Bullets: A Soldier’s Story of the Russo-Japanese War 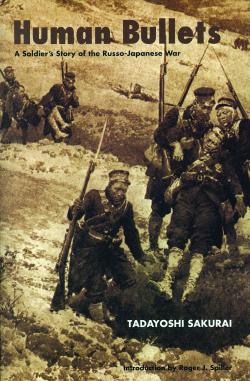 This edition of Sakurai Tadayoshi’s classic memoir, Human Bullets: A Soldier’s Story of the Russo-Japanese War, includes the original 1907 English translation and an introduction by Count Okuma Shigenobu. While this remains a valuable text, simply reprinting the original edition poses a number of problems, including a lack of basic contextual information.

A hundred years after the Russo-Japanese War (1904-1905), readers might have benefited from the addition of footnotes and a critical introduction. However, Human Bullets remains a fascinating resource for readers interested in the military history of the early twentieth century or the history of modern Japan. Human Bullets recounts Sakurai’s experiences during the Russo-Japanese War. His unit, the 22nd Infantry Regiment, arrived in Manchuria on May 24, 1904, just in time to participate in the preparatory actions leading up to the siege of Port Arthur.

Throughout the months of June and July, the 22nd Infantry (part of General Nogi Maresuke’s 3rd Army) saw action at Waitu-shan, Kenzan, and Taipo-shan. Sakurai’s performance earned him a promotion to first lieutenant and command of a company immediately prior to the first general assault on Port Arthur. Wounded in a failed attack on August 23, Sakurai lay among his fallen comrades until rescued by another Japanese soldier the next day. Owing to the severity of his wounds, Sakurai returned to Japan for treatment, where he penned Human Bullets during his convalescence.

Over the next decade, Sakurai’s memoir was translated into English, Chinese, German, French, Italian, and Russian. “Human Bullets” serves two purposes for readers primarily interested in the military aspects of the Russo-Japanese War. First, it provides an “on the ground” perspective of what combat was like for soldiers and junior officers in the Japanese army. Sakurai gives us an idea of how Japanese soldiers and officers related to each other, how they viewed the enemy, and how they prepared for battle.

In one of the memoir’s more poignant episodes, Sakurai describes the mood in camp on the eve of the regiment’s first battle: “That night I could hardly sleep for excitement; I tossed and fretted in bed, pictured to myself the battle of the morrow, or talked nonsense with the comrade in the nearest bed. I saw the occasional flickering of small fires in the dark and knew that not a few were awake, smoking and cogitating” (p. 79).

Unfortunately for most Western readers, “Human Bullets” is one of the few literary works of the Russo-Japanese War to have been translated from Japanese. Many other fascinating works, including Mori Ogai’s “Uta nikki” (Poem Diary), Mizuno Hironori’s “Kono issen” (This Battle), and Tayama Katai’s short story “Ippeisotsu” (A Soldier), have yet to be translated.

Second, “Human Bullets” should be of interest to scholars and students of the First World War. Historians often approach the Russo-Japanese war as an awful prelude to the horrors of the western front. Sakurai depicts the violence of modern siege warfare in a fashion instantly recognizable to anyone familiar with the Somme: virtually impregnable fortifications; massive, multi-day artillery preparations; and infantry mowed down like grass as they struggle to move forward in the face of machine gun fire. Missing, however, is the criticism of general officers so characteristic of Western WWI literature.

In Sakurai’s account, unsuccessful attacks are necessary first steps toward victory, not pointless tragedies. Recounting his reaction to the capitulation of Port Arthur, he writes: “Not only I, but all the wounded who had taken part in the siege, wept while we rejoiced. The bleached white bones of our brave dead that filled the hills and valleys of Port Arthur must have risen and danced with joy!” (p. 255).

Had the war gone on for four years instead of one, Sakurai’s account might have more closely resembled memoirs of the western front. Beyond its value for military historians, Human Bullets is a rich text on the history of Japan during the early twentieth century.

In the standard narrative of modern Japanese history, the Russo-Japanese War marks the culmination of the Meiji period’s (1868-1912) modernizing efforts and Japan’s arrival as an imperial power. With world curiosity aroused by its victory over Russia, Japan had an opportunity to reposition itself within the hierarchy of nations as an empire coequal with the great imperial powers of the West. Accordingly, statesman Okuma Shigenobu’s introduction to “Human Bullets” attributes Japanese victory not to military prowess per se, but to the kind of national character necessary for a great power: “[Our] soldiers vie with each other in offering themselves on the altar of their country,(sic) the spirit of sacrifice prevails to a marked degree. This is the true characteristic of the race of Yamato” (p. x).

In contrasting Japanese and Russian attitudes towards king and country, Okuma predictably regards Japan as the superior nation. Human Bullets also emphasizes a message of Japanese superiority vis-à-vis other Asians. For the most part, Chinese are absent from this two-nation contest. When they do appear, the residents of Manchuria either function as spies for the Russians or coolies for the Japanese.

On several occasions, Sakurai questions their humanity: “Were they men or animals? With ill-favored faces, they would whisper to each other and pass on” (p.33). The English translation hides even more blatant racism. In the original Japanese, Sakurai refers to the locals not as “Chinese,” but as “chan,” an ethnic slur used frequently in the nineteenth and twentieth centuries.

Despite occasional lapses, the translation itself contains relatively few problems. Some passages seem overly jingoistic when rendered in English, but the original Japanese often sounds equally contrived. What really hampers this edition of Human Bullets is the lack of crucial contextual information. Readers should know that Sakurai had political connections to influential figures like Okuma. They should also know where Human Bullets stands in the broader genre of Japanese war literature. A solid critical introduction would have remedied these issues and made this edition standout from its predecessors.

I recommend the University of Nebraska Press’ 1999 edition, which includes a short introduction and has a much smaller price-tag. While these issues are significant, they should not dissuade readers from taking a look at Human Bullets.

Copyright (c) 2005 by H-Net, all rights reserved. This review appeared on H-Net on 27 March 2006 and was originally published by H-War@h-net.msu.edu and H-Net: Humanities & Social Sciences Online.