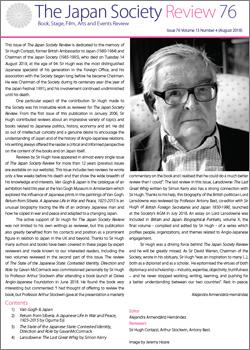 This issue of The Japan Society Review is dedicated to the memory of Sir Hugh Cortazzi, former British Ambassador to Japan (1980-1984) and Chairman of the Japan Society (1985-1995), who died on Tuesday 14 August 2018, at the age of 94. Sir Hugh was the most distinguished Japanese specialist of his generation in the Foreign Office, and his association with the Society began long before he became Chairman. He was Chairman of the Society during its centenary year (the year of the Japan Festival 1991), and his involvement continued undiminished until his death.

One particular aspect of the contribution Sir Hugh made to the Society was his invaluable work as reviewer for The Japan Society Review. From the first issue of this publication in January 2006, Sir Hugh contributed reviews about an impressive variety of topics and books related to Japanese politics, history, economy and art. He did so out of intellectual curiosity and a genuine desire to encourage the understanding of Japan and of the history of Anglo-Japanese relations. His writing always offered the reader a critical and informed perspective on the content of the books and on Japan itself.

Reviews by Sir Hugh have appeared in almost every single issue of The Japan Society Review for more than 12 years (previous issues are available on our website). This issue includes two reviews he wrote only a few weeks before his death and that show the wide breadth of his knowledge and interests. Van Gogh & Japan is the catalogue of an exhibition held this year at the Van Gogh Museum in Amsterdam which explored the influence of Japanese prints in the paintings of Van Gogh. Return from Siberia. A Japanese Life in War and Peace, 1925-2015 is an unusual biography tracing the life of an ordinary Japanese man and how he coped in war and peace and adapted to a changing Japan.

The active support of Sir Hugh for The Japan Society Review was not limited to his own writings as reviewer, but this publication also greatly benefited from his contacts and position as a prominent figure in relation to Japan in the UK and beyond. Thanks to Sir Hugh many authors and books have been covered in these pages by expert reviewers and made known to our interested readers, including the two volumes reviewed in the second part of this issue.

The review of The State of the Japanese State: Contested Identity, Direction and Role by Gavan McCormack was commissioned personally by Sir Hugh to Professor Arthur Stockwin after attending a book launch at Daiwa Anglo-Japanese Foundation in June 2018. He found the book very interesting but commented: “I had thought of offering to review the book, but Professor Arthur Stockwin gave at the presentation a masterly commentary on the book and I realised that he could do a much better review than I could”.

The last review in this issue, Lansdowne: The Last Great Whig written by Simon Kerry also has a strong connection with Sir Hugh. Thanks to his help, this biography of the British politician Lord Lansdowne was reviewed by Professor Antony Best, co-editor with Sir Hugh of British Foreign Secretaries and Japan 1850-1990, launched at the Society’s AGM in July 2018. An essay on Lord Lansdowne was included in Britain and Japan: Biographical Portraits, volume X, the final volume - compiled and edited by Sir Hugh - of a series which profiles people, organizations, and themes related to Anglo-Japanese engagement.

Sir Hugh was a driving force behind The Japan Society Review and he will be greatly missed. As Sir David Warren, Chairman of the Society, wrote in his obituary, Sir Hugh “was an inspiration to many (...), both as a diplomat and as a scholar. He epitomised the virtues of both diplomacy and scholarship – industry, expertise, objectivity, truthfulness – and he never stopped working, writing, learning, and pushing for a better understanding between our two countries”. Rest in peace.